Everyone Needs a .22 Rifle

Everyone Needs a .22 Rifle

The one rifle everyone should own is a rimfire

Most of us can remember our first rifle. Chances are good that it was a .22. That .22 was probably a variation of a rifle on this list. Whether you’re looking for the best .22 rifle, or one similar to that first .22 rifle you started out on, everyone needs a .22 rifle.

Is there a more iconic .22 rifle on the market? The Ruger 10/22 has been the top-selling .22 rifle pretty much since it was introduced in 1964. The original carbine rifle with the barrel band is still available, along with a slew of variations. And there is perhaps no other rifle of any caliber, with the possible exception of the AR-15 platform, that has more accessories available. You can swap out nearly every part of the Ruger to customize it for your needs. The original Ruger rotary magazine holds 10 rounds and there are aftermarket magazines available that hold way more. Everyone needs to own a Ruger 10/22.

Pros/The most popular .22 rifle ever. More accessories available too.
Cons/You'll want to own more than one.
Bottom Line/The iconic .22 rifle that everyone should own, even if you own other .22 rifles.
Shop Now

If you ask many gun owners what .22 rifle they’d like to have, quite a few will say a Henry Lever-Action .22 rifle. In fact, over  1,000,000 models of the classic Henry .22 rifle have been sold. These silky-smooth lever guns have an American walnut stock and a tube magazine that holds 15 rounds of .22 LR, or 17 rounds of .22 short. Henry Rifles are an iconic part of the old west and American history. Today’s Henry Rifles are solid performing rifles with smooth actions and a lot of nice features for a price that will shock many with how affordable they are. The Classic Lever Action series is the most affordable. There is the ultra cool Golden Boy line with the iconic polished brass Henry was known for, and a Silver Series, as well. Henry has a wide array of tribute and special edition models that are as much a piece of art as they are a sweet, functional .22 rifle. You know you want one. Why not get it one?

A classic that keeps on performing, the Marlin Model 60 has been plinking for decades and will keep on doing so well into the future. The Model 60 has been in production for over 60 years and the company has sold over 10 million rifles. That’s a lot of targets, pop cans, squirrels and more. The rifle is fed via a 14-round tubular magazine that feeds an action with a cross-bolt safety and an action that holds open with the last shot. The 19-inch barrel has micro-groove rifling and a precision crown, making it a fun and accurate rifle. How many of us have filled a day’s squirrel limit with one of these lightweight and super fun rifles?

When you want a simple, inexpensive .22 bolt-action rifle, look no further than the Mossberg 802 Plinkster. With an MSRP under $200, the Mossberg is nicely equipped with a synthetic stock, a detachable 10-round magazine and fiber-optic front sights. The bolt assembly has a red “cocked” indicator as an added safety measure. For someone looking for a no-frills .22 rifle, this Mossberg is hard to beat. We’ve shot a couple of them and can say this – It’s lightweight, inexpensive, goes “bang” when you want it to, and delivers the bullet where it’s supposed to go. Could you want anything more than that in a sub-$200 .22 rifle? We think not.

We’re extremely fond of the Browning Buck Mark .22 pistol and that in turn, makes us fond of the Buck Mark Rifle. The rifle version, if you’re not familiar with it, is the basic same function and appearance of the pistol, with a buttstock that is built into the frame, meaning it can’t be removed rendering your rifle into a pistol. The barrel is also elongated, making it meet the requirements of a rifle. Operation is much like the pistol. The 10-round magazine feeds through the grip, just like the pistol version. The barrel is a heavy-style version. You can get it with or without iron sights and it is a very fun to shoot .22 rifle that is outstanding for target shooting and small game hunting. If you’re a Browning fan, this is a must-have rimfire .22 rifle.

Pros/A very fun to shoot and compact .22 rifle
Cons/Sticker shock - It's not cheap!
Bottom Line/A must-have .22 rifle if you’re a Browning fan, or if you have a Buck Mark pistol.
Shop Now

6. Savage Arms B22 Precision -Custom Rifle at a Bargain Price 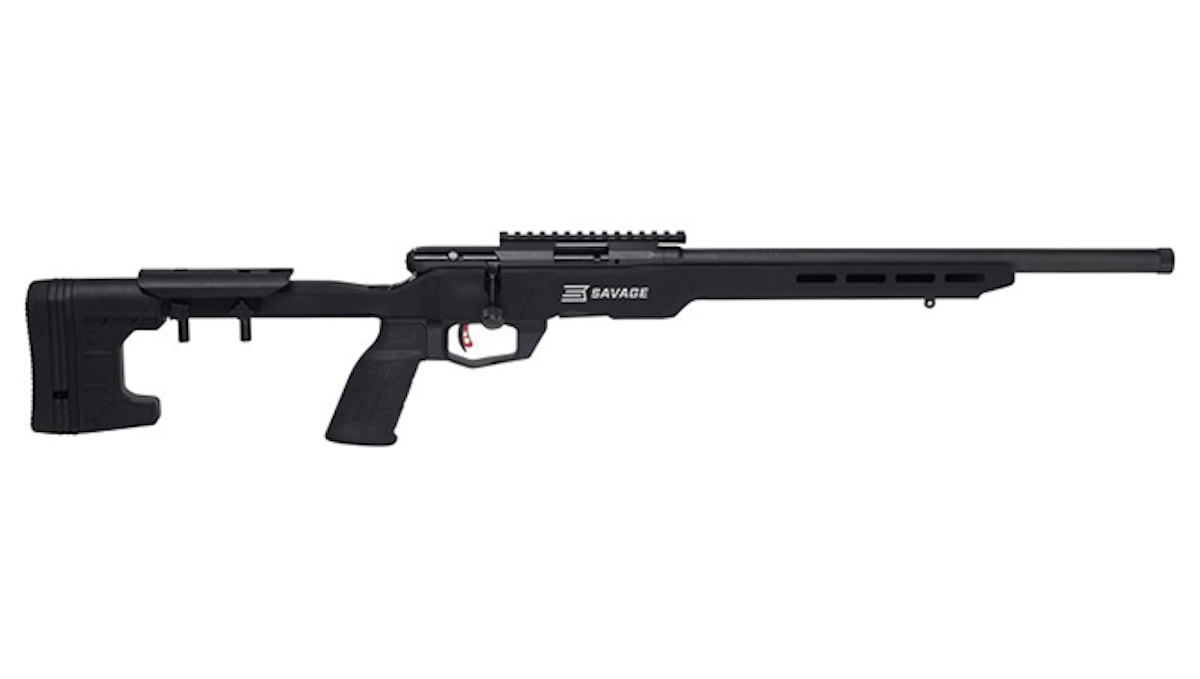 Savage made a name for themselves with a few things that revolutionized centerfire rifles – Accuracy, Affordability and amazing triggers. The B22 Precision .22 rifle takes elements of a custom precision rifle and brings them to a production .22 rifle. It has an aluminum chassis stock, a heavy barrel and Savage’s stellar AccuTrigger, an adjustable trigger that adjusts from 5 pounds of pull down to an amazing 1.5 pounds. It has a 10-round rotary magazine and is the perfect rifle for competition shooting, or for those of you that don’t mind spending a little extra for a rifle that will perform like a custom rifle right out of the box.

Pros/Hyper accurate and an amazing trigger.
Cons/A little pricey, but not as bad as a full-on custom .22 rifle
Bottom Line/Want a custom target .22 rifle in a production, off the rack rimfire? This is it.
Shop Now