You and I have one thing in common: coyotes. It’s the No. 1 predator of choice when it comes to hunting furred critters. You see it in the aisles of Cabela’s stores and when you surf online looking for predator hunting information like this OutdoorHub article. Because of this coyote obsession, the gear, tactics and strategies have a singular focus: coyotes.

But is this a good idea when there could be other predators in your zip code waiting to be hunted? If you live in an area that overlaps with bobcats, mountain lions, fox or even black bears, you might want to plan ahead for a predator party instead of a coyote blind date.

Planning for the chance at a medley of predators as opposed to just hoping a coyote shows up requires a simplified approach to calling. The sounds found in your electronic caller library range from simple prey-in-distress calls to the entire coyote vocabulary. If you hope to call more than a coyote, then you need to ditch the coyote language and think all-inviting. The reason to ditch coyote language in crossover predator country is the fact that coyotes represent danger to most other predators. Even larger predators don’t want to hassle with a coyote meeting unless they are in dire straits in the food department.

With that in mind, consider prey that any predator could tackle for a meal. In most cases, this means small. Most predators are more than happy to dine on a cottontail, jackrabbit, piglet or even a newborn fawn. The sounds of chirping chicks, squealing gophers and distressed songbirds also fit this open-to-everyone genre. Take a walk through the sound library on your e-caller and the options will be enlightening.

After you consider a few sounds, you now need to tailor you hunting style for the arrival of a surprise party guest. Coyotes will still run, walk or slink in depending on their mood, but other predators definitely have unique response characteristics to consider.

Red fox can be found throughout much of the United States and Canada, with a noticeable absence in the Southwest. They thrive in both field and forest with a steady diet of small prey. Cottontails are a fan favorite. Red fox definitely stay away from coyotes, but intermittent small prey sounds and a stand of 30 minutes or more may prove successful.

Gray fox abound throughout much of the southern and eastern United States. Grays are small in size and take refuge in thick cover, rim rock, and they even climb trees. Small prey is again the component of the gray fox diet. Unpressured grays tend to show up fast, but wait for at least 30 minutes in case you have piqued the curiosity of a nearby bobcat that may be sharing the same habitat.

Speaking of bobcats, they also populate much of North America with a love for thick cover. They dine on small prey found across the country and stick to thick cover for hunting and to avoid larger predators. Be patient as it may take a bobcat 40 minutes or longer to arrive to high-pitched distress calls.

Mountain lions are expanding their range with reports from coast to coast. Lions also come to small prey calls, despite their focus on a deer diet. If you want to ramp it up a notch, then consider a fawn-in-distress call. It can still lure in most other predators in the area, plus a hefty lion.

Finally, don’t forget black bears, especially hungry spring bears just coming out of hibernation. They are attracted to most sounds, including small prey or a bawling fawn. Bears may arrive fast, but again, 30 minutes is not too long to wait.

Do you see the connection here? Appeal to everyone’s stomach and wait a long time. Some variety of predator will hopefully come to your party. 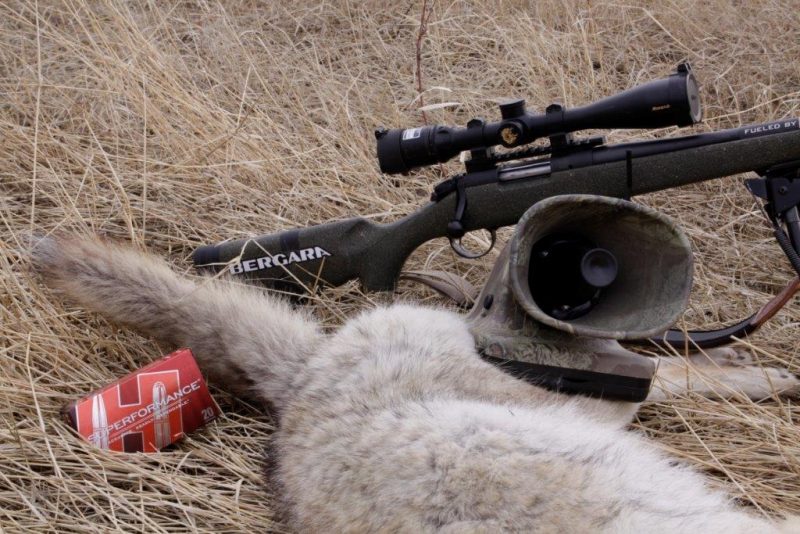 Above: A Bergara B-14 Hunter rifle teamed with Hornady Superformance ammunition teamed together for this coyote, but by using small prey distress calls the ending could just as easily been with a fox, bear, bobcat or even a mountain lion.

Editor’s note: Be sure to check out CarbonTV for free, on-demand predator content such as “Coyote Country.” Watch and enjoy!