4 Tricks for Gobbling in a Gobbler

4 Tricks for Gobbling in a Gobbler

Mention gobbling as a turkey hunting call and some traditionalists will slap you across the face. Not only do they scream about the safety factor, but they also stress it isn’t a conventional call to incorporate. I say, yes, beware of the safety issue and be on the lookout for other hunters stalking you. If someone would stalk you at any time during a hunt, speak to them in a calm and loud voice. As for customs and tradition, bah humbug.

I pack a gobbler call and use it despite the Trump-style bad press it continually generates. How can a gobble call help your turkey hunting success? Consider these tactics to use with a gobble call.

Safety is a serious concern while using a gobbler call, so use common sense. It probably isn’t wise to use a gobble call in a heavily hunted public area. Using it from a ground blind is advised because hunters will hopefully spot your hide. At all times, you should hang an orange hat or cloth in a tree above your setup site to advertise your presence. And, as previously noted, if you do spy someone stalking toward you, speak to them in a calm, clear and loud voice to announce your location.

Like our new President who excels in nontraditional actions, using a gobbler call is definitely not a traditional turkey call. Nevertheless, sometimes a bit of nontradition is exactly what you need to find success. 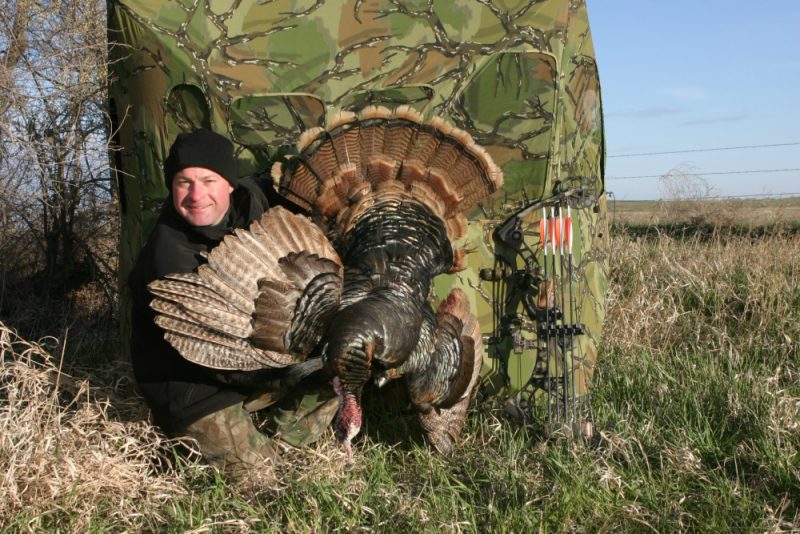 Several years ago, I was hunkered in my ground blind and my hen yelps were going unnoticed due to the amount of competing, real turkey chatter in the area. I switched to a gobble call mixed with cutting, and within minutes a group of gobblers strutted by my blind at less than 20 yards. My Mathews bow assisted in letting the air out of the one with the most PSI (photo above).