Tips for Killing a Hung-up Gobbler

Tips for Killing a Hung-up Gobbler

We’ve all hunted a gobbler that loves to shout, but won’t come your way even if you had a trained team of live hens doing a Radio City Hall Rockettes’ routine in front of you. Why won’t they budge? It’s nature, and the rules say it’s the hen’s job to go to the gobbler.

Or, could be a terrain issue? Be on the lookout for turkey-stopping elements that you’ll need to maneuver around if you hope to find success.

Scouting or hunting, pay special attention to the layout of the land. Turkeys, like most wild critters, know every inch of their home, and they travel certain routes for a specific reason. They set up routes to favorite locations, and oftentimes utilize the path of least resistance. In brief, they avoid obstacles.

Hunters chasing gobblers in hilly country know the difficulties of setting up for a gobbling bird. It can be next to impossible to get a bird to climb a steep ridge or descend into briar-choked hollow. Odds are good the bird won’t budge. Instead, he’ll gobble like crazy in hopes the hen will come to him. Get on his level to avoid the insanity.

Steep slopes and deep holes aren’t the only barriers to block a gobbler. The most common barrier in turkey country acts like China’s Great Wall. It’s the common fence. Sheep or panel fence stops turkeys cold, and even a tightly-strung wire fence can make a gobbler pace up and down the boundary. You’d think a critter equipped with wings would just flap to the other side, but instead they pace at the conundrum before them. Get on their side of the fence to speed up your hunt.

Most property owners love when a river runs through their estate, but that same riparian zone can also stop a gobbler in its tracks. Wide creeks, wetlands, ponds and the likes all have turkey-stopping power. Like a fence, try to set up on the same side of a water source to avoid frustrations.

If you do find yourself calling to a gobbler in long-term parking you have several additional options. First, ramp up the calling. Cuttting, fighting calls and demanding yelps could make him discover his wings and set the flaps. It may take some time, but I have pulled gobblers across large rivers.

Next, go to the bird. You might not be able to cross a river, but you may be able to wade a creek or use terrain to stalk closer to a fence. You may also have to consider a major relocation. Sneak away from the site; use your vehicle to find a bridge or circle behind a hill. After you make the big move, strike up a new conversation with the gobbler. He may be more eager to run to a hen that is set up along a field edge instead of having to contemplate a Titanic moment with the big water.

Two springs ago, my son and I ran up against a water-challenged gobbler. The bird was planted on the opposite side of a creek running at full volume due to mountain snowmelt. After giving in to the situation, we backtracked and found a log over the torrent and then tightroped our way across. Firmly on the bird’s side, we crawled to the edge of a flat above the bird’s last known position. I staked the decoy and started with some soft yelps.

The frustrated gobbler must have been waiting for easier action. In seconds, we could see the white tips of his Merriam’s fan. When he peeked over the rise, his overanxious attitude was halted with Cole’s well-placed shot. 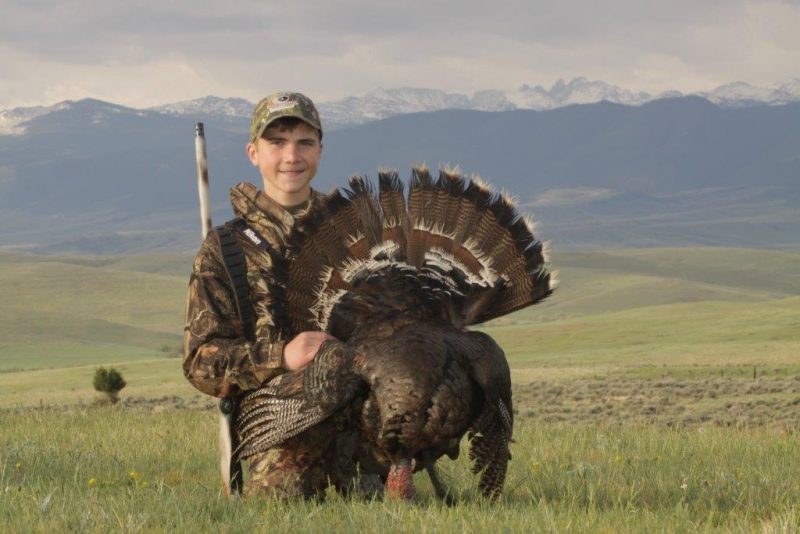 Above: The author’s son, Cole, shot this gobbler after crossing a creek and getting on the side the gobbler preferred. A few quick yelps from a slate call enticed the gobbler up a small rise and Cole, hidden in Mossy Oak camouflage, sent a load of Hornady Heavy Magnum turkey to end this tom’s frustrating day of trying to cross a creek.