What Pisses Me Off about So-Called Traditional Turkey Hunters

What Pisses Me Off about So-Called Traditional Turkey Hunters

This is my 19th spring season of hunting wild turkeys, I’m reminded of where it all started in eastern Iowa during the late 1990s. A good friend recognized my intensely growing passion for chasing whitetails, and he knew I’d be consumed with chasing the elusive longbeard.

He was right. And I owe him for that investment.

I’m thankful I don’t have to choose between spring turkeys and chasing rut-driven whitetails in the Midwestern hardwoods. Both make me get out of bed in the morning, but the sound of a granddaddy gobbler belching his dominance from a pre-dawn limb is some kind of glory all in itself.

I love it. It’s so, so special to me, I find it hard to even explain.

That very first morning sit along the Cedar River banks near my hometown changed me. The woods simply lit up with the daily morning serenade, and to this day remains one of the finest gobbling mornings I’ve ever experienced.

After what seemed like hours, a bird finally appeared along the far timberline about 100 yards from my position, and he began the pirouetting dance as he made his way toward my Carry Lite jake and hen. The sheer beauty of the springtime scenery, the morning sounds, smells and the kind of encounter that eastern gobblers are renowned for astonished me. I was beyond hooked.

As it often does in this game, something happened that morning and the bird tucked up and headed away from me. The culprit? Who knows . . . it was probably me to be honest. I was moving around like a fat kid at an ice cream counter, and I probably got busted.

Since that day, I’ve been very fortunate to travel nine different states in pursuit of springtime gobblers, and I’ve experienced some epic hunts that I’ll not forget. Ever. I’m very thankful for the opportunity to pursue them in a manner in which I enjoy best – and that means whatever the situation calls for within the confines of the law.

Across my near 19 years, I’ve averaged almost four birds per season between two to three states. And that’s not in any way an excuse to brag, because if you knew the number of hunts I totally screwed up to get to that point, you’d laugh. Rather, I hope those stats illustrate a level of passion and commitment. Take it for what it’s worth. 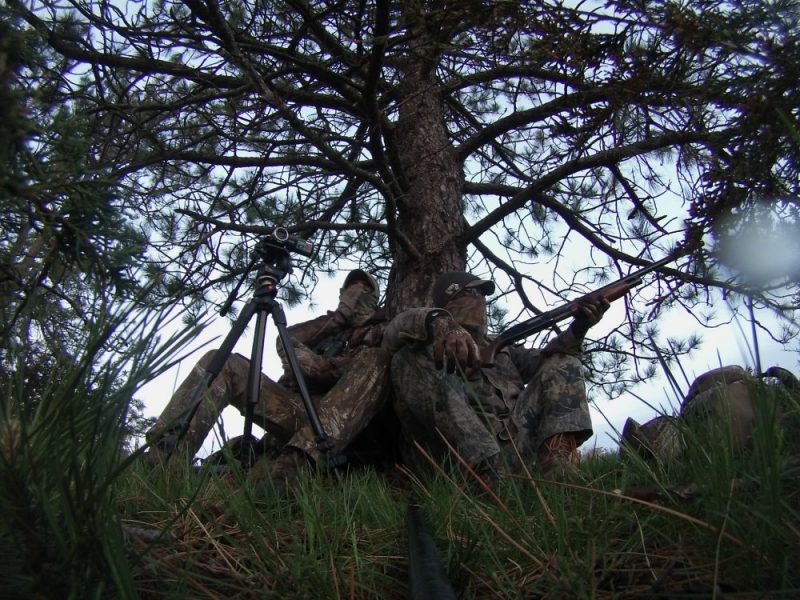 I’ve killed birds with a shotgun, muzzleloader and bow. I’ve chased turkeys along ridge tops in expansive tracts of timber; I’ve used a boat to locate and move in on gobbling turkeys; I’ve sat with my back against a tree on an agricultural field; I’ve put out a dozen decoys hoping to lure a flock close enough – and won; I’ve reaped turkeys from behind the minimal cover of a tail fan on a stick; I’ve bullrushed and bushwhacked them; and I’ve sat hour after hour from a strategic location in a ground blind partaking in the proverbial chess match with a stationary gobbler. None of these birds were “gimmies.” 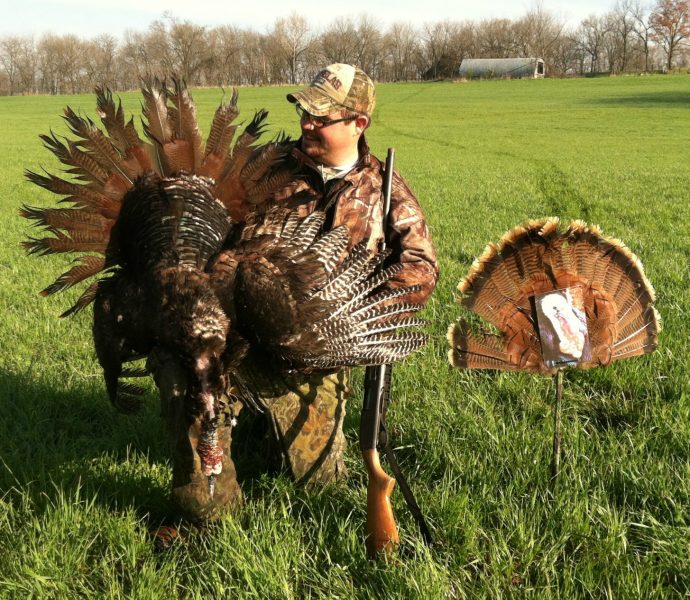 I love it all, and each technique has yielded success over the years. I love the fact that turkeys are a major challenge to consistently kill regardless of the method, and I especially love the impressive amounts of strategy each approach requires.

Which is my favorite? That’s simple: Whichever works best for the given situation. 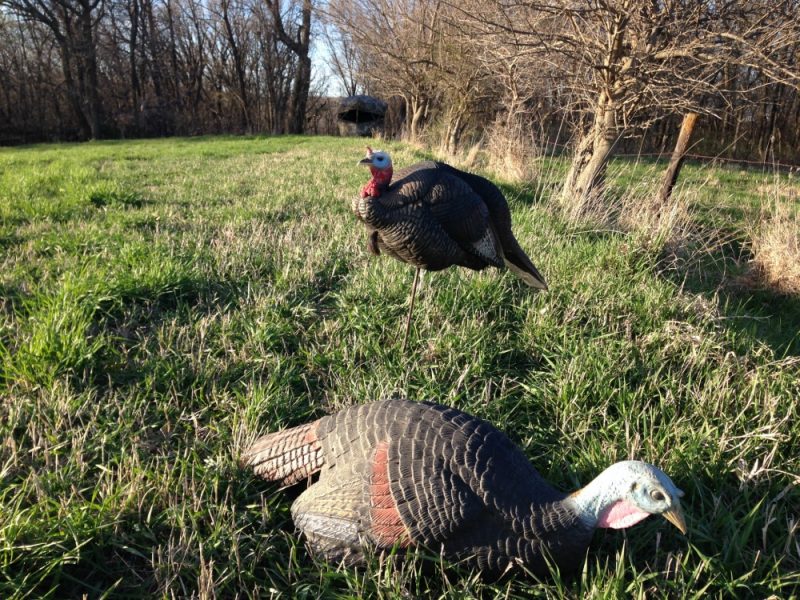 Let me tell you what really bugs me, especially as of late: The traditional hunters who think there’s some sort of imaginary, unfair advantage to killing a turkey from a ground blind.

In fact, many of these hunters who claim it’s cheating would rather eat a tag than kill a turkey from a blind. That’s straight hogwash.

Before I continue, let me be clear: If it’s a legal method of take, I’m not above hunting from a blind to be successful. I love the game that much, but it greatly irritates me to be judged based on one single strategy in a deep bag of tricks.

Over the years, I’ve talked with a number of hunters who claim they’d never kill a bird from a blind, but they’re mostly the same hunters who sit in some sort of shooting house to kill big whitetails over a hot food source during bitter cold winter weather.
What’s the difference?

Perhaps, these turkey hunters learned to hunt by running and gunning, which is a great time by the way, but when the vocalizations dry up and the birds are no longer responsive, do they just quit? Maybe. Or do they park their butts against a tree and do their best to wait turkeys out while their legs go numb and patience taps out?

Why not do the exact same thing from the comfort of a ground blind? Is it really that unfair?

Sure, it requires a bit more gear to haul, and it takes a dedicated level of patience and commitment, but don’t tell me it’s easy.

Killing turkeys from a blind requires a deep knowledge of the birds’ daily routine, how the terrain affects that movement, and understanding how important it is to set up where the birds want to be. And then there’s a level of calling skills that is hard to match – you literally must be able to “talk” a bird into coming to you, which is not the natural way of things.

I firmly believe that the better turkey hunter will find a way to kill a bird over the guy who is too stubborn to employ a tactic the thinks is below him. 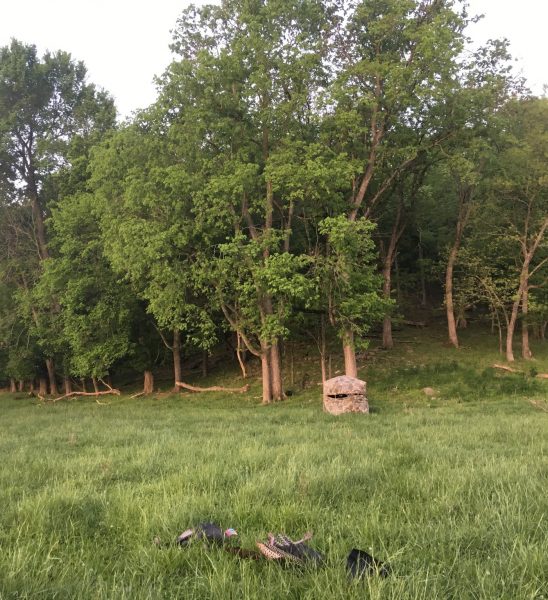 I’m tired of the debate, I’m tired of hearing turkey hunters who prefer to hunt one way criticize those who do it differently. Isn’t this game about making your heart pound in your ears? Isn’t this game about enjoying the great outdoors to the fullest extent, and sharing it with those you love? Who freaking cares if that’s from the base of an oak tree or from a foldout chair inside a Double Bull?
It’s not like shooting a bird from the limb before the sun ever rises. Now that’s cheating.

I just think the debate is more about tradition vs. new methods that have proven to be just as effective, and the old-school mentality is unwilling to accept or adapt to a new tactic. And you know what? That’s just fine! I’m happy that we’re able to do it how we like best.

I’ve heard this line more than I care to admit as well, and frankly it pisses me off: “Blind hunters have no woodsmanship.” I know lots of hunters who lack woodsmanship, who don’t hunt in a blind and still end up being successful year after year. But I don’t care! In fact, I’m happy for them, I’m happy that they, too, can be passionate about a sport that has shaped my life and career, whether they suck or not. It just makes me happy to see others enjoy turkey hunting.

Sure, I’ll agree that woodsmanship in general isn’t as common as it used to be, but don’t tell me an intimate understanding of the woods, the wild turkey in general and a deep respect for multifaceted strategy isn’t required to be successful from a blind. Because I’ll tell you straight up that it is.

To me, the hunter who consistently kills birds through a myriad of methods is the more accomplished outdoorsman. 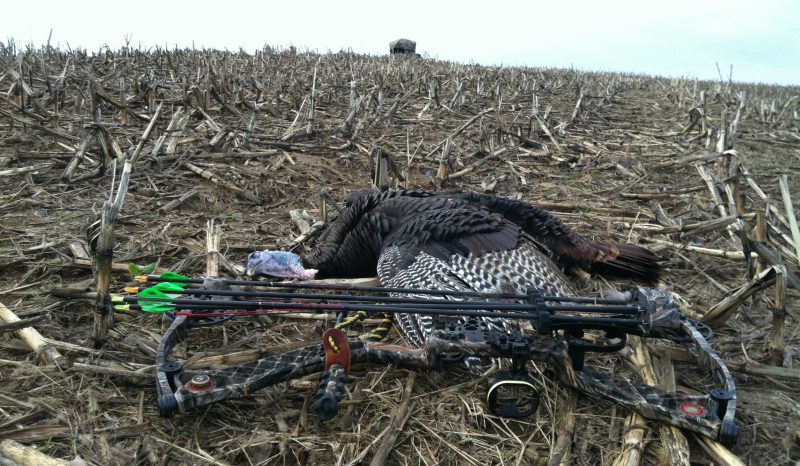 For a few years, I had limited access to private ground. One of those properties came with very little timber, in fact there were two small draws that poured into 150 acres of tillable dirt. However, the timber behind it was unavailable to me, and the deer and turkeys always ended up in the field.

The turkeys roosted along the edge and pitched into the field every morning, making it difficult and very risky to get in close. And if you did, they’d fly from their trees right into the field and out of shooting range.

What were my options? That was the only place I had to hunt turkeys for 2 years, and I managed to fill my resident tags both seasons on that property from inside a blind that was placed in the middle of the field. One of those birds was my largest ever: The gobbler sported 1 3/8-inch spurs, six beards and tipped the scales at 23 pounds.

Was I cheating? Hardly . . . I call that being resourceful.

I didn’t kill a single bird during the morning; they came during the afternoons after hours of waiting and back-and-forth calling. The birds would get close, then they’d retreat; back in close again – and like they hadn’t seen it before, they would suddenly realize there were a couple of decoys out there and come running in.

I’m guessing the hunters who won’t stoop so low as to use a blind simply don’t have the patience to wait them out.

There is a huge commitment factor to the blind approach, and it takes lots of scouting and preparation well in advance to understand when and where they were using the field, and exactly where the blind needed to be.

In fact, I’d argue that the hunter who sits in a blind needs to be more proficient at calling and decoy placement than the hunter who prefers to run and gun only. 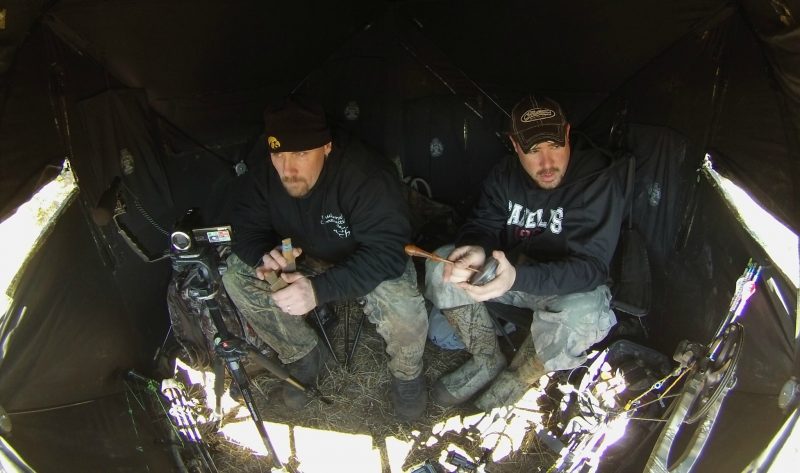 There’s no question that it takes an impressive amount of bulky gear, a willingness to haul that gear to where it’ll eventually be set up, and dealing with the fact that mobility has been sacrificed for this approach. But it works if you’re willing to put forth the effort. (At this point in the story, I’m beginning to realize there’s a need for a follow-up article that details how and where I use a blind. I’ll get on that.)

Blinds are a great option for beginning hunters of all ages, and if you love to film hunts like me, a blind is often the best method to set up the required camera gear, especially if you hunt by yourself. In fact, my favorite turkey hunt of all time was filming my young son kill his first bird in Minnesota from inside a blind.

There are plenty of benefits that I can continue to detail, but it may not be your cup of tea, and I can appreciate that. 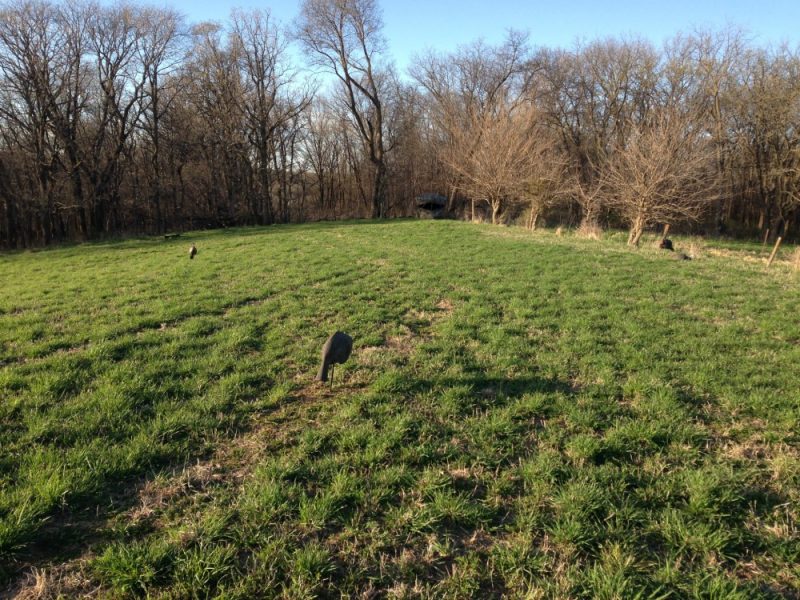 It’s time to quit complaining about how other hunters enjoy the sport. Turkey hunting is about connecting with creation and witnessing a spring morning unfold in all its glory. If that means your butt is in the dirt and back against a tree, great! But it can also be enjoyed to the same extent from inside a blind – if that’s your thing.

My point?  Pardon my clichés, but things change, and most of the time it’s for the better. You can’t fight change; the only thing that never changes is the fact that things always change – stated as a generality in life, love and other pursuits.

If you think turkey hunting from a blind is unsportsmanlike, you’re wrong.

If you think turkey hunting from a blind is cheating, you’re wrong.

If you think turkey hunting from a blind requires zero talent or woodsmanship, you’re wrong.

Maybe come join me sometime and let me prove it to you. But then again, I may have my back up against a tree, or trying to hide my butt behind a tail fan as I sneak in on one.

I just love hunting wild turkeys in the spring. I’m not sure there’s a more satisfying pursuit in the outdoors.

I just can’t get enough.