Alligator Gar of a Lifetime — with a Bow!

Alligator Gar of a Lifetime — with a Bow!

Bowfishing has been a passion of mine since I was a little girl. My brother and I used to spend our summer days down at the local river bowfishing carp every chance we got. The rule in our house was our list of chores had to be done, then we could hop on our bikes, ride to the river and bowfish until evening. Then, we just had to be back home in time to cook dinner before my parents got home from work. The amount of fun the carp and river offered could never be matched in my eyes.

As much as a still love to bowfish, I don’t exactly have the same amount of time or responsibilities that I once did as a young Minnesota girl in the summer. With that said, I try to use my time wisely, and after hearing about some of the big alligator gar Texas has to offer, I put that on my bucket list and waited for the right opportunity. 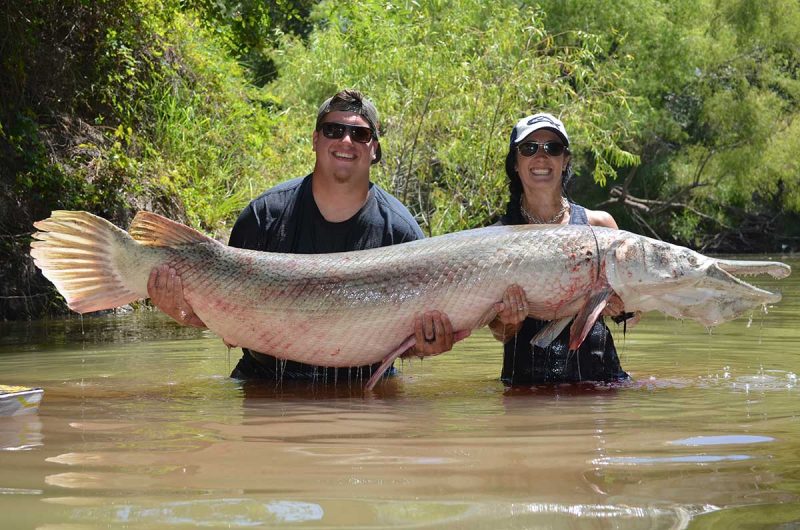 For years, I’ve been lucky enough to hunt with Britt and Martin Reina in Texas for deer, hogs, and axis deer, and they are truly some of the nicest people you can find. In the summer months, they would tell me stories of the big alligator gar they shot with their bows, and I finally decided I couldn’t wait any longer. I booked a trip for mid-July, and headed down for a weekend. Our plan was to bowfish both during the day and at night. With the hot temps, we decided to sleep during the peak midday heat and then do our best to hunt at night and during the early mornings.

As far as gear for this trip, I put a lot of time in getting everything prepared to ensure I had the correct setup. I was shooting my bright-pink Mathews Jewel. This is a bow I leave rigged just for bowfishing, and I absolutely love the color, too! The weight is set at 60 pounds; it doesn’t need to be that high, but I look at summer bowfishing as a great way to keep my strength up, and there’s no better way than to draw my bow over and over. Next, I have a muzzy Mantis Bowfishing Rest on, with a HHA Optimizer Lite adjustable bowsight. I run a Muzzy XD Pro Spin style reel with 200-pound-test line. This offers an easy way to shoot and also get reloaded quickly; it also has enough strength to pull in something as big as an alligator gar. Finally, I used a Muzzy Classic Fish Arrow with a Gar Point. 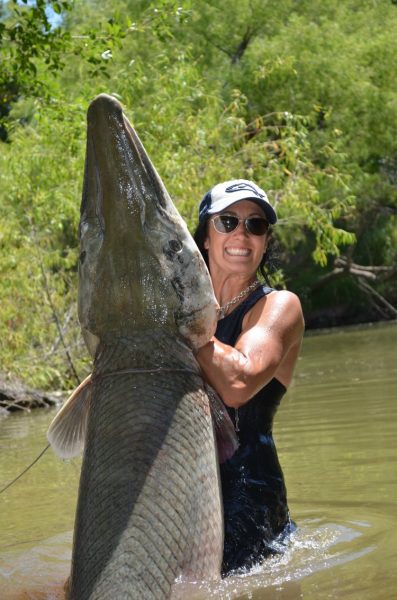 The first night out, we saw a lot of carp and smaller gar, but none of the big fish were up at the surface that we could find. We fished/hunted until 1 a.m., headed in and then went back at daybreak to try our luck at the morning fish. Of course, we were all tired, but the morning was beautiful and not yet too hot.

We were seeing a lot of small gar and then finally hit a strip of the river where the big gar were surfacing. The problem was they would surface as soon as our boat would go by! I was thinking we should have brought a kayak or raft to tie behind the boat because that would be where your best shots were, right after the big boat passed. During mid-morning we had a big gar surface by my side of the boat, and I missed it! I was so bummed out. This was my big shot, and there it went. Instead of getting down, I figured if it can happen once, it can happen twice.

As it was getting closer to noon, we were thinking about heading back when suddenly a monster gar surfaced right in front of us. The next thing I knew, we had three arrows in this beast, and the fight was on!

My dog, Pork Chop, was along on the boat, and I quickly realized this could get dangerous for her in a hurry! With the fish thrashing, I was worried she was going to try and get close and lick this big fish, like she always loves to do with carp. Trying my best to keep her back and get the fish in the boat, we finally got it all accomplished, and I could hardly believe my eyes. 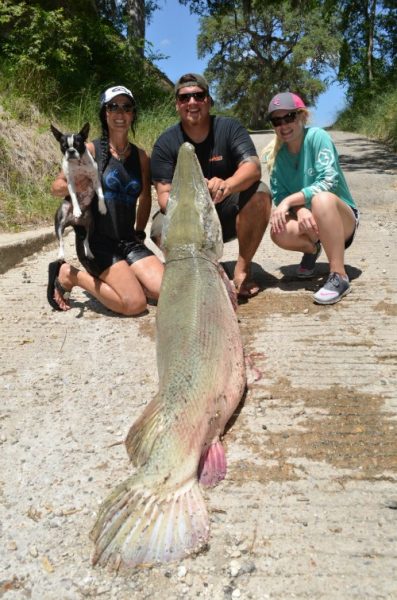 This was an absolute fish of a lifetime! Weighing in at over 200 pounds, this 7-footer was more than I could have ever hoped for! In the end, we had such a fun time out on the water, and this bowfishing trip will be a memory that I’ll never forget.

P.S. For those people who don’t think gar is good eating, it can be prepared numerous ways. You can grill it, smoke it or deep fry it. Trust me — it’s actually quite good.