Ling cod, eelpout, lota, lawyer, mud shark – these are all wonderful names associated with the ice belt’s most misunderstood fish, the burbot. Don’t let the goofy names or the stories of eelpout wrapping around your grandfather’s arm scare you – burbot are ferocious fighters and delicious table-fare.

My Love for Ling

I’ll never forget the day we met: My father had just cut the line after a great battle with another Lake of the Woods burbot. I was a young boy, and I didn’t understand why a grown man would be afraid of a fish, and why so many ling were lying about the ice. I eventually complained enough that my dad let us bring one into the house, where it proceeded to knock around everything we had on the floor, and eventually slithered its way back down one of the ice holes. That was my first face-to-face encounter with the slimy beast, and one I’ll never forget. 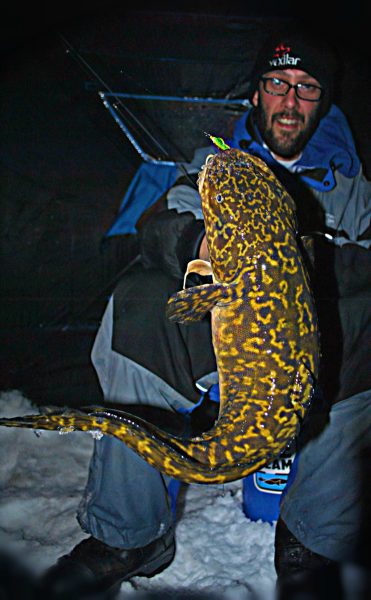 The Face Only a Mother Could Love

Color varies depending on water clarity, depth of the fish, and time of year. The main colors can be anything from tan to dark brown, usually with yellow blotches scattered about the body. I’ve seen burbot that were nearly colorless, with black spots all over the body. I’ve also seen them look so vibrant with yellow that they appeared to jump straight off a painter’s pallet. 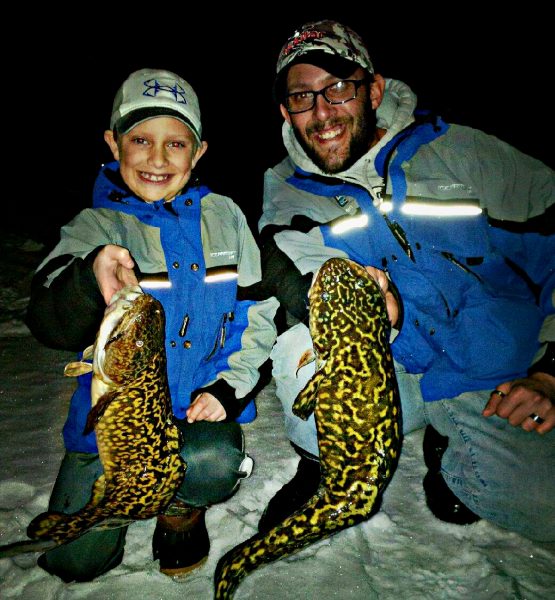 Burbot are the only member of the cod family to live in freshwater lakes and rivers. They like cool waters, and are most active in the winter. During late-February to mid-March, while ice still covers the lakes in the North, the burbot move up onto humps or shorelines in search of a good area to form their “spawning ball.” Picture this: Hundreds of burbot have been observed intertwined and curled into a single ball while spawning. A single female can lay up to 1 million eggs.

Like many fish, the burbot is an opportunistic feeder. They’ve been known to eat anything from small invertebrates to mice and shrews. Their main forage is fish, and the burbot is a ferocious feeder in the darkness. Like the walleye, the eelpout relates most often to the lake bottom, however, when chasing food the burbot often rides high in the water column, even breaking surface. Young-of-the-year perch, tullibees, crawfish and various baitfish are the primary forage for bloated bellied burbs. 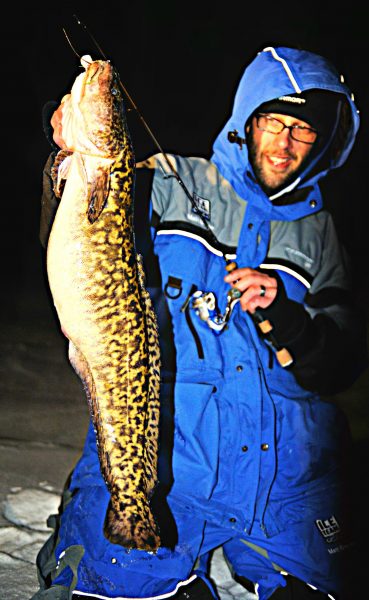 Since burbot are most active in the winter while packing on pounds, getting ready for spawn, this is also the most common time of year to catch the delicious urchins. Through the ice I’ve caught burbot in depths ranging from 2 feet all the way out to 60 feet. Researchers have found burbot as deep as 1,000 feet in the great lakes. Depth isn’t the key, structure is. Shallow flats or deep holes that hold large pods of bait during the day can be productive, while shallow bars, breaks or humps adjacent to deep water reign supreme after dark.

Simple walleye gear is sufficient for burbot. A 32- to 40-inch medium-powered ice rod teamed up with an ultra-light reel is perfect for the mid-winter beasts. For line, 6- to 8-pound-test monofilament is usually sufficient, but many hardcore burbot enthusiasts tie on braid and tip the setup with a swivel and some fluorocarbon. Large jigging baits such as the Salmo Chubby Darter or a Big-Nasty Trout & ‘Pout Spoon are great choices if you’re targeting them after dark. The amazing water-movement and vibration made by these big baits teamed with the weight to help stir the bottom is deadly. Adding the fact that you can get both baits in a mega glow color makes them even deadlier. Tipping your baits with shiner minnows on each treble is a proven tactic. Any extra scent you can get down to the bottom is a plus.

Electronics are a huge advantage when chasing ‘pout. While the majority of the eelpout you’re going to encounter are close to the bottom, some of the larger fish come through suspended. I don’t know how many times my Vexilar FLX-28 has shown me suspended ‘pout that I would’ve missed if I hadn’t been using electronics. The 28 is sensitive enough that it can aid you in telling when your bait comes dislodged from your hooks as well. 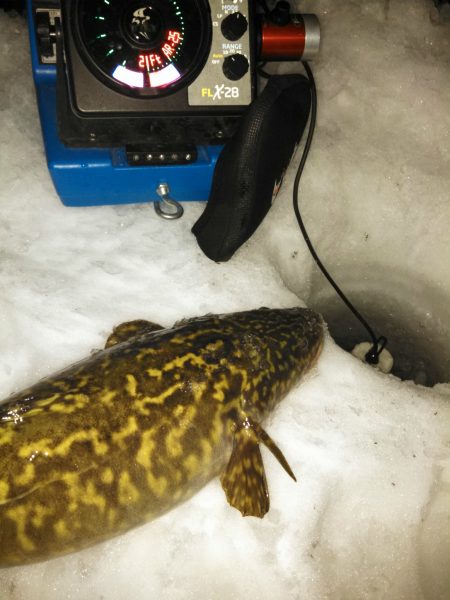 Jig often and be aggressive. Calling in one burbot with aggressive jigging often leads to small flurries. Banging the bottom to stir things up and make some noise is a good way to call their attention. When you mark a fish on your Vexilar, slowly lift your bait and keep it moving. Most of the ‘pout you mark are going to smack your bait, and when they do, hold on. Others may hit when you’re tapping bottom, and you won’t know you’ve hooked one until you start to jig and feel their mass. In other words, it’ll feel as if you’ve snagged the bottom.

After reading the description of an eelpout, I realize that you’re not jazzed about eating one. However, I assure you, they’re one of the tastiest fish swimming. They’re also one of the most nutritious!

Cutting out the backstraps of the ‘pout and boiling them in water and lobster boil is one of the easiest methods. For something different, boil them in a mix of water and Mtn. Dew or 7 Up. This is a great way to enjoy “poor man’s lobster.” Once boiled, you can dip the flaky white meat in sweet butter and enjoy. The tail-section is best when breaded and fried, sprinkled in lemon, and dipped in tartar.

The over-sized liver of the burbot contains huge amounts of vitamins A and D, however, I don’t have a recipe for you there . . . 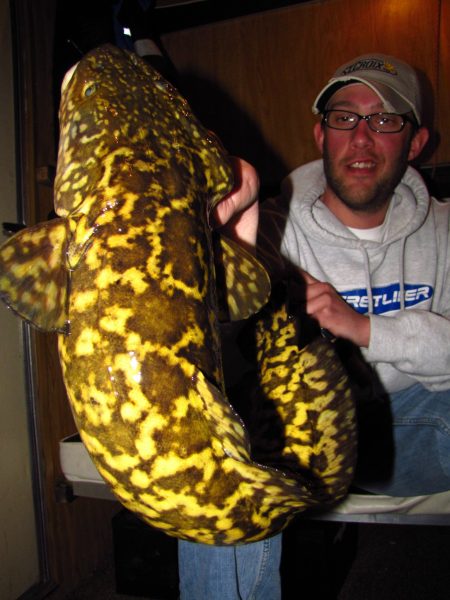 A good burbot population is the sign of a healthy fishery. Next time you’re on the lake and you hook into a “pesky” burbot, don’t throw it on the ice, throw it back for another angler to enjoy, or throw it in your bucket and give one of the aforementioned recipes a try.

Editor’s note: Check out the entertaining video below showing the author’s young son catching his first eelpout on a rattle reel. And click here to contact Matt to book your own burbot adventure; the fish are biting right now!