The transition from hand-to-hand combat to the use of primitive weapons happened roughly 5 million years ago. Rocks and sticks were used to give fighters an edge over their opponent. It allowed them to keep some distance, yet strike at will. In ice fishing, many weapons have made their way into ice anglers’ hands over the years, improving their catch rates and ability to find fish. One method of fish warfare that is often forgotten or overlooked is the tip-up, and even more overlooked are the upgrades in tip-ups and tip-up rigs.

It’s time to get caught up, so you can have that edge over your fishy opponent on the battlefield anglers call the ice sheet.

Almost every ice angler is familiar with the tip-up (below): a basic “t” with a built in spool, a triggering mechanism, and a flag. They come in wood or plastic, some are black, blue or orange, some have flags, and others have bells. 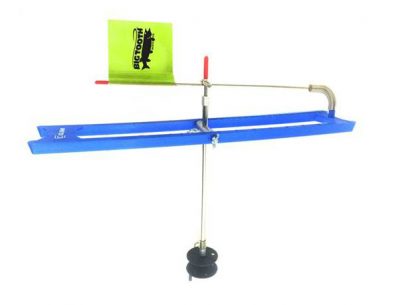 One thing they all have in common is that they are spooled with heavy line, and have to be “reeled in” hand over hand. I recall using old school tip-ups as a kid, and getting cuts or burns on my fingers from fish giving hard head-shakes or making big runs. I also recall having to clean up all of the tip-ups after a day of fishing. The lines were always a mess, tangled and mangled.

Then came along the tip-up that allows the use of a rod and reel. There are a lot of companies that make them, but I use the Arctic Warrior Tip-Up from Clam (below). You’ve still got the advantage of being able to set the rig a reasonable distance away, and watch for a flag to pop to let you know that you’ve got a fish on, but you get to grab the rod and fish the fish with modern gear. A simple attachment that can be connected to any rod and reel combo with velcro or tape is provided, and it provides the balance point in the simple-to-use system. 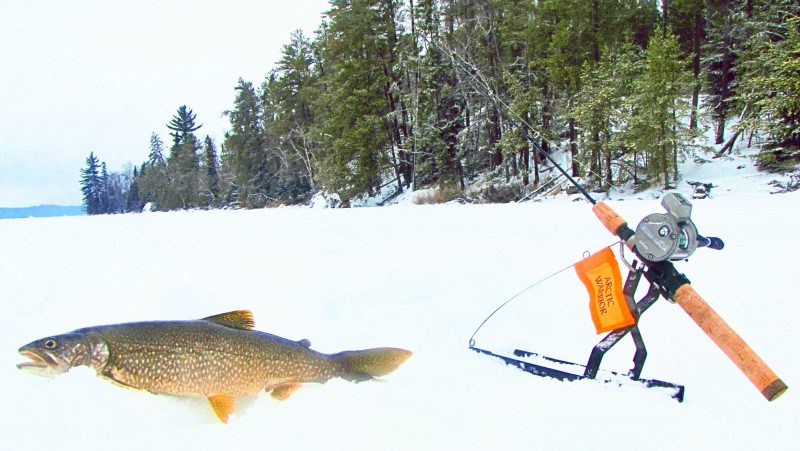 A person can simply open the bail of their reel, let the line down to the desired depth, set the line in a notch on the holder bar, and set the holder bar in a notch in the attachment. When a fish takes the line, the rod tips forward, releasing the holder bar, and setting off the flag to let you know you’ve got a bite. Then you simply walk up to the Arctic Warrior, take your rod/reel combo out, close the bail, and set the hook. Now you’re fighting and playing the fish with a reliable drag, and an appropriate action rod. No more cut fingers or dealing with a mess after a day of fishing.

Check out the video below to see the Arctic Warrior in action.

Zeroing in on the Toothy Ones

Bigtooth Tackle hit a home-run with the Zero Flouro Rig (below). When many people think about tip-up fishing with Bigtooth Tackle, they think northern pike. The Zero Rig comes in three sizes, and is great for anything from walleyes and trout up to northern pike and muskies. Their patent pending design allows you to rig a minnow so that it hangs perfectly horizontal, but when the fish eats the bait and you rip into the fish, the hooks slide toward each other. 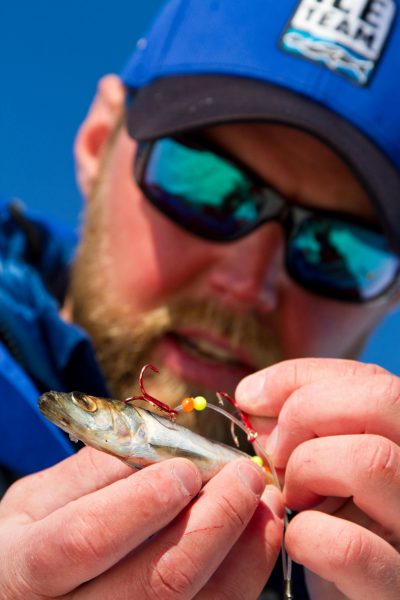 The less space between the two trebles while fighting the fish, the less chance of a hook catching on the bottom of the ice, and the better the chances of getting both hooks stuck into the fish. The fluorocarbon option (below) works very well for lake trout and walleyes, which are very visual predators, because flouro is virtually invisible under water.

The Zero Rig also comes in a wire version (below) for those big toothy pike. 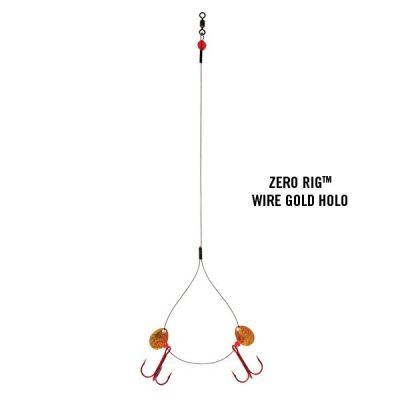 Here are a few really cool tips that will aid you in becoming a more proficient and better tip-up angler.

Tip-ups don’t take long to set up, and are very effective in fishing for anything from panfish to giant predators. Based on your state regulations, you should almost always have as many tip-ups out as your state allows along with your jigging rod to cover water.

While fishing at sunset, I’ll often set a tip-up much shallower than where I’m jigging. I know that when the tip-up starts to go off, it’s time to move in shallower with my jigging as well. They aren’t just for break lines – tip-ups can be used on weed edges or on flats, be it shallow bars or deep mud flats, having your setup spread out across the structure never hurts. Let your tip-up be your silent fishing partner. If you’re lucky, it might even out-fish you.