Kayser on Coyotes: Don’t Get Stuck in a Rut

Kayser on Coyotes: Don’t Get Stuck in a Rut

For hunters, the survey says that you and I rate the No. 1 problem with hunting as not having access to enough land. That can be an issue, especially when calling coyotes. Depending on where you live, coyotes might have a large home territory, like those dogs cruising west of the Mississippi, or a smaller home territory, like coyotes hunting for food east of the Mississippi. The latter – and even the former – could create issues if you have only that one property to visit to call coyotes.

Why? It takes only one bad setup for a coyote to get in downwind of you and smell a rat. So how do you combat the issue of hunting a single property or several small properties? You vary your strategies.

Begin by varying your visits. If you have more than one property to hunt, then set them up on a rotational schedule so you don’t call the same property on back-to-back days, or even on back-to-back weekends. Rotate visits to every other week and your staggered trips will likely not match up with where a coyote was the time before.

In the same spirit, vary your setup sites. Fluctuating winds will help you with this factor, but if your property sports a steady, prevailing wind, be sure to try different locations so any educated coyotes don’t turn tail when you turn on your caller.

Next on the list is to vary your calls. That’s easily done today by using the dozens of sounds found on digital callers. Go online to stores such as Cabela’s or others and peruse the variety of electronic callers, and the hundreds of sounds they store in their massive digital libraries.

Switching from a dying rabbit to squawking chicken, or from a fawn to a prairie dog in dire straits, ensures predators won’t zero-in on your regular visits. Plus, it aids in boosting a predator’s confidence if it was burned on an adjoining property by a novice caller. Don’t think coyotes don’t get around and feel the zip of a bullet over their back from the neighbors.

And don’t be afraid to add in animal sounds not found in your region. Predators don’t have access to the Animal Planet channels and have no clue if prairie dogs live in Florida, or if wild piglets have set up a domicile in upstate New York. If it sounds edible to them, they’ll make a reservation at your table regardless of the zip code.

In closing, you should also switch up your overall strategy, not just your calls. If you’ve never used your remote caller to remove yourself from the sound area, try it. If you’ve never included a decoy (prey or predator), add one to your trap. Maybe you have the option to spot and stalk, or even still-hunt. If conditions exist, then give those a try as well. Some areas are even conducive to whitetail-like ambushes. A dead cow or a predictable river crossing might lure coyotes right into a treestand ambush.

Doing the same thing over and over again soon will soon have coyotes avoiding you like the plague. Vary, switch and fluctuate to keep coyotes guessing. And the more they guess, the more you’ll press the trigger on your predator rifle. 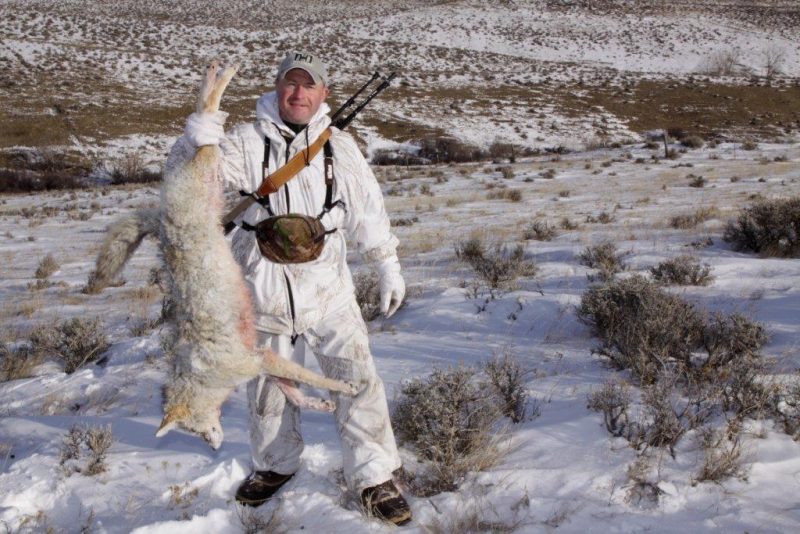 Above: The author recovers a coyote he shot after switching from prey-in-distress calls to straight coyote vocalizations on a property he hunts repeatedly during the fur season. His gear included a Bergara B-14 Hunter rifle in 6.5 Creedmoor and fueled with Hornady Superformance ammunition. Nikon optics helped in spotting, ranging and aiming. Mossy Oak Brush camo in a snow pattern aided in a successful ruse.