Urban Dictionary might provide a wealth of street smarts while navigating the concrete jungle, but when you step into the bush and take to the river, you might have to learn the lingo. Knowing which side is starboard and what side is port is easy (port and left are both four letter words). However, after you plug deep into the various dialects, it can bewilder the bilingual.

Without going overboard, here are 20 terms that will help keep you afloat:

“I couldn’t squeeze in anywhere; there were feather flickers taking so long to cast that the run will probably be over by the time they get in a decent drift or two!”

“He just landed a fish, so we figured we’d let him have that hole to himself, but when we tried to pass him that anchor yanker decided we should go down the next rapid side by side.”

“The rubber necker spent more time looking at us than his bobber. You’d think there was a checkered flag at the next ramp!”

“There are two tools in his boat: one is on the oars, and the other is the only tool in his tacklebox because he’s a one trick pony.”

“You can’t even get a decent drift in that hole anymore because the gear chuckers came through and filled it with lead, braid, and fish carcasses.”

“This googan was using a sturgeon rod for trout fishing, snagging bottom every other cast, and wading out in the water to stand on top of the fish. Whoever his mother is should be put on birth control!”

“The feather flickers were taking up so much space that the gear chuckers just started casting over their lines. There were googans everywhere, too; it was combat fishing at its worst!” 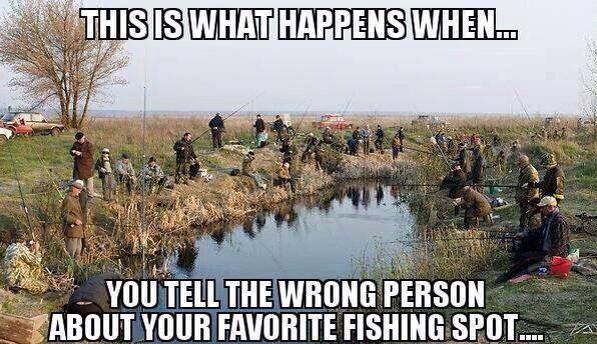 “We didn’t get a bite all day until Russell busted out the fish whistle, then it was fish on!”

“As if the combat fishing was bad enough, this Pilgrim walked right into the hole and started questioning how many, what drift, how deep, what color, and what pattern – like it was some kind of an interrogation.”

“I wanted to make a cast into that spot, but this googan had his line out across the river squirrel hunting.”

“There was a ton of fish being caught up by the deadline, but some googan posted about it on Facebook, so now it’s a zoo.”

“The best thing about fishing the tributaries is the lack of coasties acting like they own the river.”

“This spot used to be a well-kept secret; who told these flatlanders about it?”

“The damn thing was squirming all over the place until we gave it the ol’ wood shampoo!”

“It’s not like I’m going to sell all my line counters and trolling gear, I’m just a little fly-curious!”

“It’s pulling drag like a hawg! Oh man, look at that pig! Get the net, this thing is a toad!”

“Look at that scale spitter, she’s covered in sea lice!”

“Hey flatlander, are you going to tag that ol’ boot? Gross!”

“Look at that old zombie swimming along the bank; it’s only a matter of time before that thing is crawdad food!”

“Notellum Creek, the Upper Nunya and the Wishyanu River are where I’ve had the most success; good luck out there!”