Winter is a long season in Minnesota. Many of us go through a progression that begins with describing how beautiful the first snowfall is, and ends with a bonfire in the yard to celebrate the day it all finally melts. There are a lot of tough things to deal with for most Minnesotans: wind chills of 50 degrees below zero, icy roads that don’t get better until spring, going to work in the dark and coming home from work in the dark, and then there’s snow . . . piles and piles of snow.

However, every February for the last 38 years, roughly 10,000 people get their happy faces on and head to Walker, Minnesota, for the annual International Eelpout Festival.

If you’re on the fence about whether you should attend it this year with a group of friends, perhaps I can lend a bit of insight that will help you decide. In no particular order, here are 10 things you’re bound to see Feb. 22-25, 2018, at Pout Fest.

You cannot attend the Eelpout Festival without seeing an eelpout. What is an eelpout? It’s a long fish with a single barbell on its chin and a dorsal fin that runs back to its tail. Eelpout, also called burbot, are equal parts fat and muscle, and look a lot like a spotted salamander that bred with an exotic eel. For fishermen, they fight like the dickens, and for food connoisseur, they are elite table fare.

Seen by some (sadly) as trash fish, the eelpout is probably the most underrated fish in the sport of ice fishing. Eelpout are fish that love deep, dark water, and are rarely seen in the summer months. Come winter, the eelpout feeds with reckless abandon, and in late-February whilst preparing for their upcoming spawn, eelpout feed heavily, and anglers take note. And I almost forgot: If you attend the Festival, be prepared to kiss a pout! For tips on catching an eelpout, check out this article I wrote for OutdoorHub. 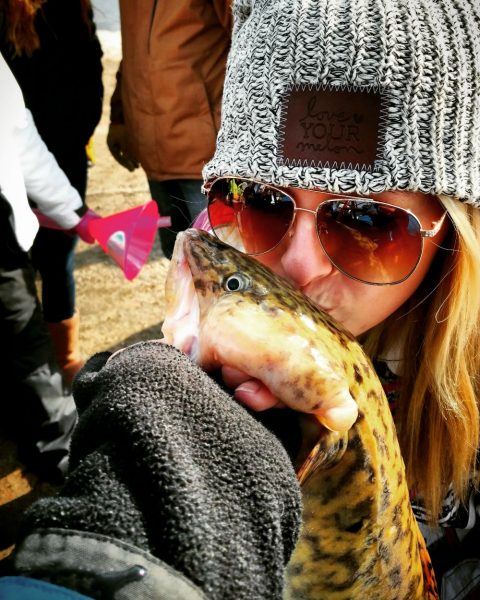 Because Minnesota’s weather is highly unpredictable, many people heading to the Eelpout Festival have trouble deciding what to wear. Well, the attendees at the Polar Pout Plunge have an even harder decision if they want to keep up with the plungers that have gone in before them. From Superman costumes to giant chicken suits, it’s getting tough to see any original outfits. Regardless of what the plungers wear, they get wet, and they get cold. 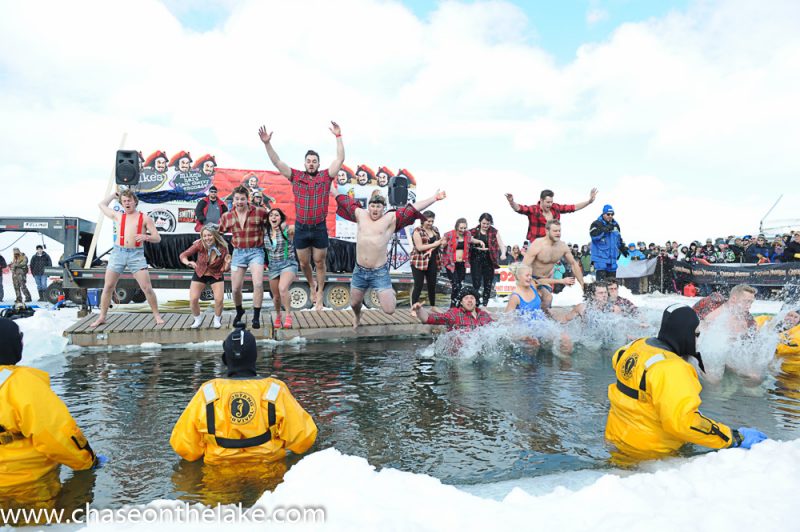 The frigid water is hardly holding above freezing. Every precaution is taken, and emergency staff is on-hand. Hot tubs are also readily accessible and using them is encouraged. 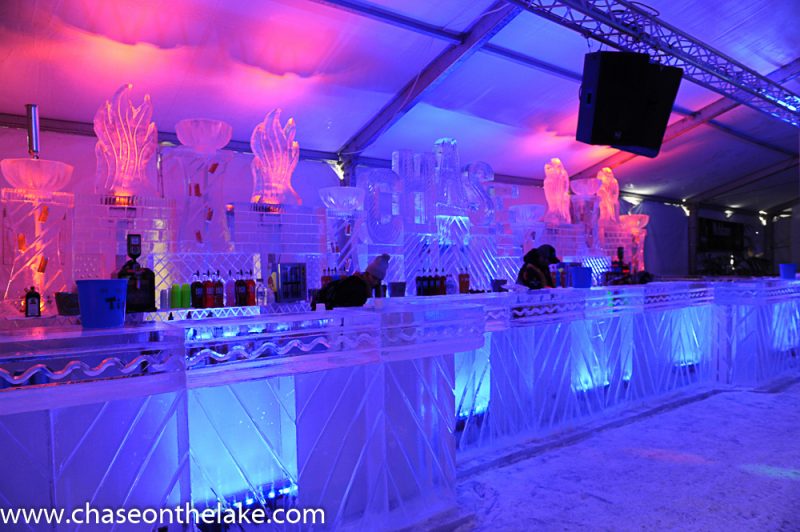 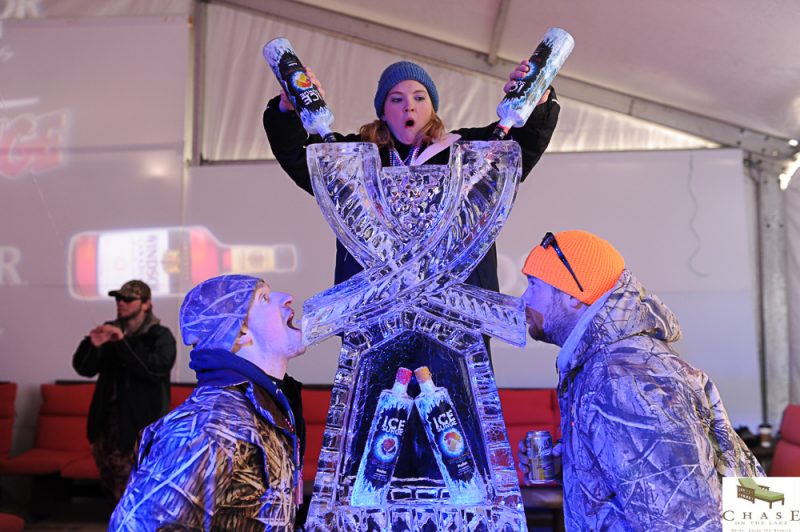 They even have shot troughs made of ice. If you’re lucky, you might even be offered to take a shot from an actual frozen eelpout.

That’s right, helicopter rides. Simply get in line at a heated shack on the ice, swipe your debit or credit card, and take flight with a friend above beautiful Leech Lake, and behold the crowd from the sky. You haven’t seen an ice festival until you’ve seen in from the air. 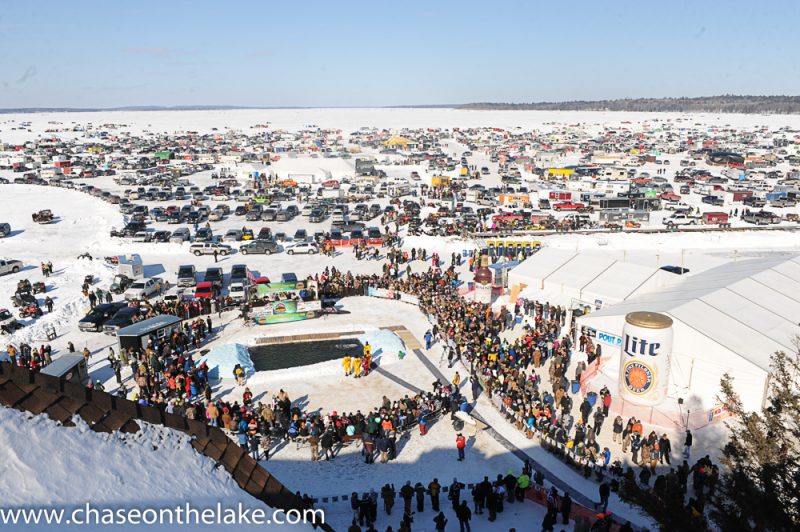 It’s incredible hearing from most of the riders that it’s the first time they’ve ever been in a helicopter. It may not be romantic, but it’s something special.

In northern Minnesota, kids are taught how to curl in gym class. For the rest of the country, they’ve only seen it played on television during the Olympics. Whether you’re an avid sweeper or haven’t seen a sheet of curling ice in your life, catching a few ends of pout curling (below) will blow your mind. Could it be the next Olympic event? Doubtful, but nothing’s impossible. 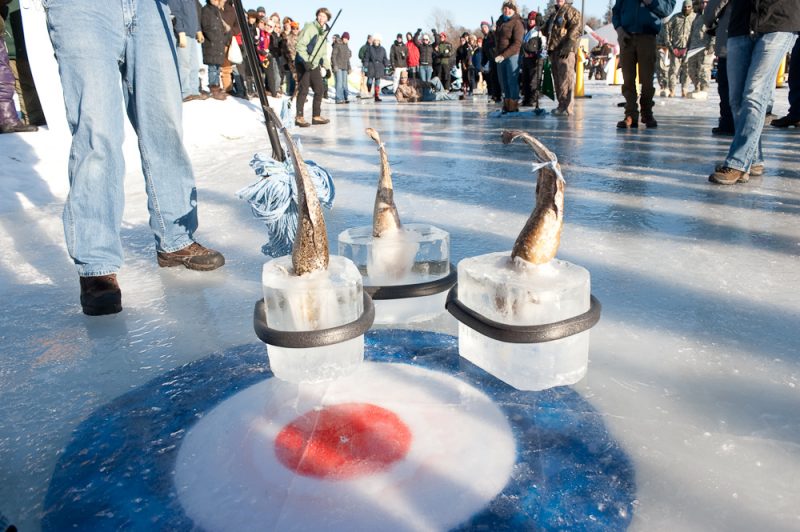 If you prefer games played indoors, try your hand at Hammerschlagen, a game where contestants take turns trying to drive nails into a log using the pointed end of a cross-peen hammer (below). 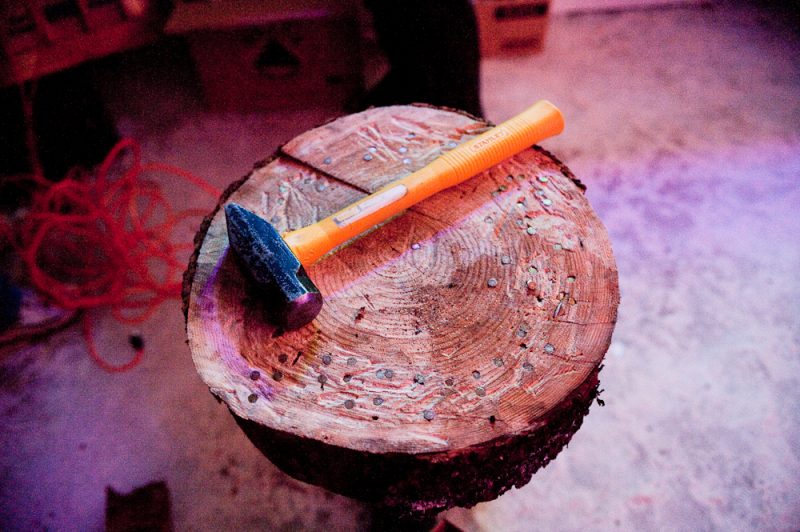 Interested in something a little more physically challenging? Enter the ring and try riding the bull. How many people can say, “I rode a mechanical bull on the ice last weekend?” 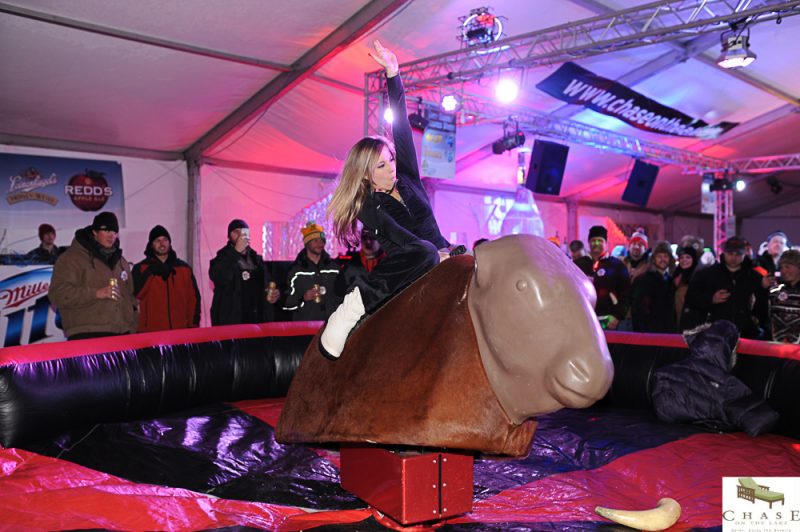 If the collegiate games are more your style, sign up for the Beer Pong tourney and try to keep yourself upright. 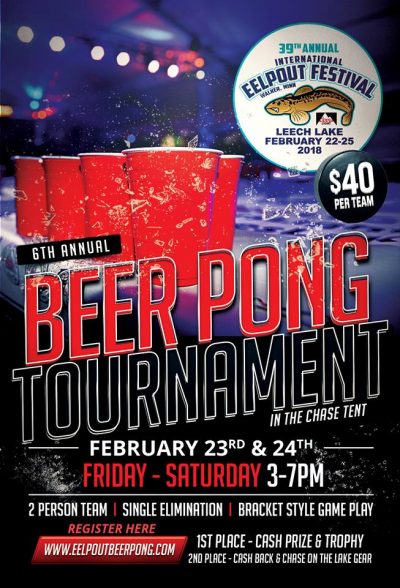 Beer helmets, fur hats made from every critter you can think of, dead fish, empty beer boxes, and dozens of other noggin huggers are a sure sight at Eelpout Fest. Every year I see something new and impressive.

With all the games and judging going on at the festival, I wouldn’t be surprised if a hat contest became a yearly tradition.

Amongst all the partying and craziness, many people forget that there’s an actual tournament going on. Prizes and trophies are awarded to anglers bringing in the smallest eelpout, largest eelpout, and there’s even an award for the group with the heaviest total catch dubbed the “team tonnage” award. Register any eelpout, and you’re name goes into a box and tons of prizes are given out near the end of the event with a random draw. 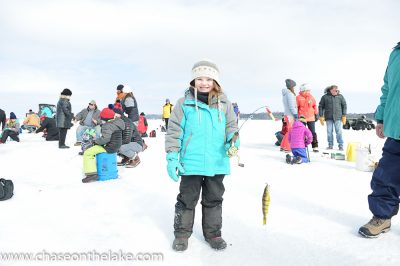 There’s even a perch jerk for the kids (above). Every participant gets a prize, and cash awards are given to some lucky young anglers.

I’ve been in or around Pout Fest for over half of my life, and I’ve seen some very cool and innovative “vehicles” or things pulled behind vehicles. Every year I see at least one picnic table behind an ATV, and at least three couches with skis being pulled behind old beater trucks or quads. 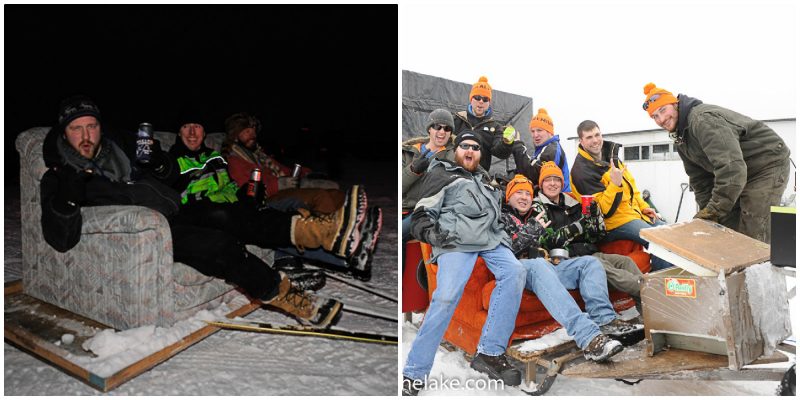 I’ve said hello to a man on a unicycle that was drinking a beer, and I’ve waved at a man and woman on a Harley riding down the strip on 30 inches of ice. About every third group you pass brings a smile to your face. At times, it feels like you’re at some sort of make-shift parade where people constructed floats out of junk cars. 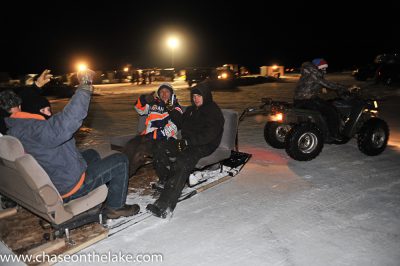 Not unlike any festival, carnival, or county fair, food is an important part of the event. You’ll find the usual event grub such as mini-donuts, brats, beer stands, pulled pork sandwiches and burgers. But, only at the Eelpout Festival will you find eelpout nuggets, and get a chance to attend the eelpout fish fry. Pout nuggets are absolutely delicious. Despite their ugly faces, eelpout are freshwater cod, and have a thick and flaky white meat. 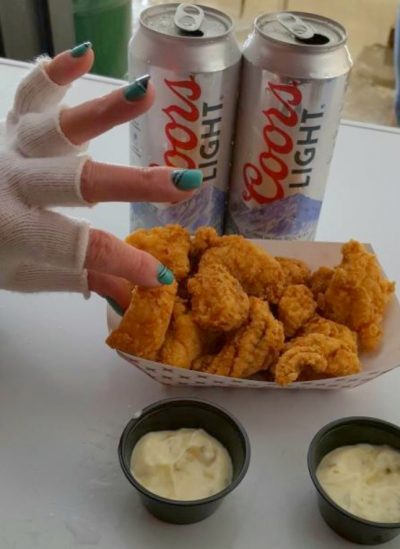 Eating a hot basket of deep-fried pout after being on the ice all day is heavenly. A few specialty food trucks show up as well, and there are some secret recipes that us yearly attendees would love to get our hands on. If you can find the baked beans, eat them.

Every type of fish house or shanty imaginable can be found at Eelpout Fest. From trailers of lumber that suddenly transform into cabins on ice, to 24-foot custom-built pull-behind fish houses. Villages go up on opening day, and some are packed together and have tarps or wood walls to make travel from each easier and warmer. Small villages with names like “Camp Y” are there yearly. Most of these villages have an opened door policy. When the light is on, visitors are welcome. 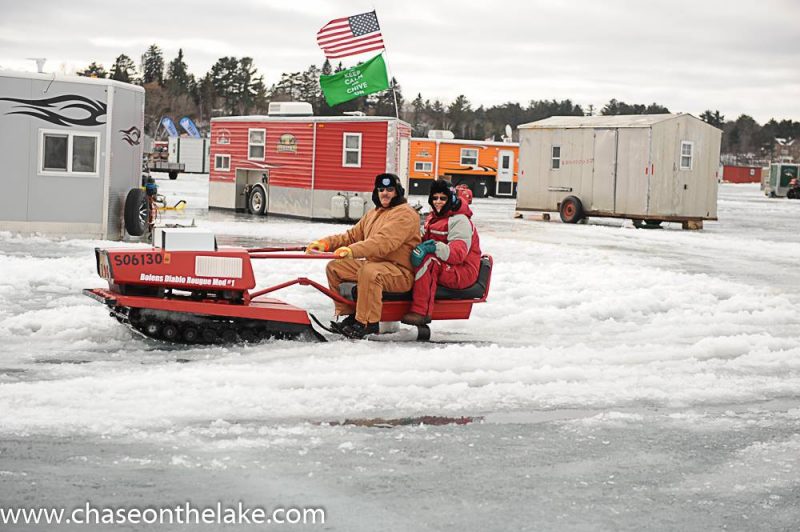 Part of the allure of Pout Fest is walking the strip, visiting fish houses and villages, and talking with all walks of people from all over the world. Yes, the world. Every year there are visitors from other countries taking part in the activities.

This year’s annual International Eelpout Festival will be No. 39, and it’s always held on the famed Leech Lake in Walker, Minnesota. The opening ceremony will commence on February 22 at 6:00pm, and the event will conclude on February 25.

Don’t think that the International Eelpout Festival is just a big party, because there’s literally something for everyone. If you choose to partake in the night life, so be it. If you just want to take in some people watching, this is your venue. If you’re into fishing and want a chance at some great prizes, sign up.

Check out all of the events, rules, schedules and buy your buttons at www.eelpoutfestival.com. I hope to see you all there . . . and remember to wear some funky headgear!