When it comes to protecting your home and your family, failure is simply not an option. Many of us try to plan for the worst by selecting the best tools for home defense and by being proficient with those tools. For most of us, the preferred tool for home defense is a firearm. There is endless debate over what is the absolute best firearm for home defense. For some, it is the handgun, while others prefer a rifle. Many of us, however, choose to have a shotgun handy for those moments we dearly hope never come. Let’s run through some of the basics regarding the best shotguns for home defense and what choices we would make for our own homes.

What are the Different Shotgun Action Types?

When it comes to shotguns, there are a multitude of action types (how the firearm operates) that you can choose from. From semi-automatic,  to single-shots, over and under’s and side-by-side double barrels, you definitely are not short on options when it comes to a home defense shotgun. The most popular choice, and our pick as the best shotgun action for home defense, is a pump action, like the Benelli Nova Tactical. There are three main reasons why we’d go for a pump over any other shotgun.

As criminals become more emboldened to commit heinous acts, they are utilizing the primitive survival tactic of strength in numbers. People will ring your doorbell late at night, for example, pleading a sob story of a broken down vehicle while more thugs are hiding in your bushes. For this reason, although none of us expect to get in a “shoot out,” it is best to have more ammunition available to you than less. With a tube-fed, or detachable-magazine pump, you have a considerable amount of rounds to defend your castle.

While inclement weather is not going to be detrimental to the reliability of your choice in a home defense shotgun, in the one-in-a-million chance your shotgun jams in the dark it is much easier to manually eject a bad round with a pump than to try and troubleshoot a jam with a semi-auto in the dark… And with an intruder in the house, it comes down to peace of mind. That reason alone makes us pick a pump shotgun over  a semi-auto for home defense. Check out the economical Steven’s 320 Security shotgun here.

What Type of Shotgun Ammo is Best for Home Defense?

There is also a lot of debate over what type of ammo is best for home defense. There is fine, or birdshot, heavy or buckshot and then slugs, which are solid chunks of lead/copper that were designed mostly for big game hunting. We’d have to say bird or buckshot is, by far, the better option. And even this is a huge debate. Check out some different options in shotgun ammo here.

Will a slug have more Foot-Lbs of energy? Yes, but there is a tremendous downside if you miss your mark. You could shoot through drywall or doors and potentially injure loved ones. There is also more felt recoil, which can throw you off your target in case you need a follow up shot. Buckshot or birdshot is a better option. At close range, both are going to put a serious hurting on anyone dumb enough to cause you to pull the trigger. If you want proof, take even a light birdshot load, like #8 shot, and fire it at a target from about 10-15 feet away. Buckshot, like #2, or 00, has a similar effect to being shot with a handgun 5-7 times all at once, but with more energy behind it. There are also some defensive .410 loads that use disk-shaped buckshot-style pellets. If you are going with a .410, take a look at them. They are crazy destructive.

Which is a better choice between buckshot or birdshot? Opinions vary, even here at our offices. Some of us have buckshot loaded in our shotguns, while others have birdshot. The new short shot shells, like the latest from Federal, give you more options and capacity, as you can stuff quite a few more into your shotgun magazine. Either type of shot will be highly effective, especially at close range.

If you want to know which choke tube to use, that is another area of mild debate. Don’t use a full choke. Instead we suggest an improved cylinder choke. It’s a little tighter than the open cylinder choke, so you have a little tighter spread. Modified can work too, but that’s as tight as you would want to go for buckshot or birdshot. You should really pattern your shotgun with your home defense ammo, too. It’s kind of like zeroing a rifle – you want to know where things are going once they leave the barrel.

Should I Add a Flashlight or Other Accessories to My Shotgun?

There are no shortages of accessories you can add to your home defense shotgun. There are replacement fore ends with tactical flashlights and laser sites that add an extra element to your home defense shotgun. You can add shell carriers that give you more ammo close at hand. A good one is the Monstrum Side Mount for the Mossberg 500/590 and Shockwave. It’s cheap, adds extra ammo close at hand and adds a picatinny rail for optics mounting. If space is a concern, you can often replace the buttstock with a pistol grip, too. The flashlight option is not only helps identify who is digging through your fridge at 3AM – an intruder or your drunk, but lovable neighbor – but it can also be a deterrent.

Not all crooks are brave. If they hear CLICK CLACK followed by a flashlight and/or laser sight beam coming down the hallway, there is a good chance they will bail out and run for the hills. Remember, the best resolution to any home invasion/conflict is prevention or de-escalation. No one wants to get hurt and discharging a firearm should be a last resort. Once you pull the trigger, everything changes.

The flashlight option can be good, especially when you have both hands on the shotgun, but there is a very serious downside. Whatever you’re pointing the flashlight at, you’re also pointing the barrel of a loaded gun at. What if it is that drunk neighbor? Or, your own child? One of the first and paramount rules of firearm safety is – Never point the muzzle at anything you’re unwilling to destroy. Most police officers we know say to skip the flashlight all together and not give away your position until you have a better handle on who/what you’re dealing with. It’s all a matter of personal choice, however, so add the accessories that you think will fit your home defense needs. 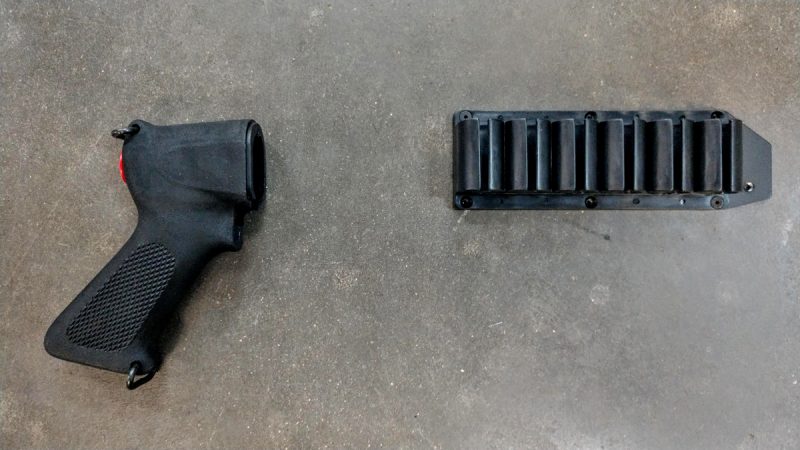 Which is the Best Gauge Shotgun for Home Defense?

Shotgun gauges range from .410 bore, all the way up to the mighty 10-gauge, although we wouldn’t recommend the later. A 10-gauge is going to be pretty brutal to handle in a defensive situation. If you want to know which we would recommend, the answer is – Whatever you feel comfortable shooting. And that applies to everyone, male and female alike. One of the things that really grates on us is when a woman goes gun shopping and get stereotyped by the salesman. “Here, let me show you something that’ll suit you, little lady.” Get some experience and try as many as you can before you decide. Check out a very cool .410 – the Henry Lever action .410 Shotgun here.

If you ask yourself, will a 12-gauge work for home defense, the answer is simple. The larger the gauge translates to more payload and more destructive energy being delivered to your target. This leads some to say that bigger is always better. But will a 20-gauge work for home defense? Certainly. The same can be said for a .410, too. The .410 has had a burst of popularity lately thanks to Taurus producing the Judge revolver that shoots .410 or .45 Long Colt. This has produced a large amount of development in .410 loads for home defense. Whatever you can comfortably shoot, and can shoot well, will work. Even the lightest .410 load will seriously make an intruder rethink his life plans, albeit however shorter they may be at that point.

What Shotgun Should I Buy for Home Defense?

You simply cannot go wrong with either a Remington 870 or Mossberg 500. These tried-and-true platforms have been in existence for decades and are easily the most popular pump-action shotguns. They are used by law enforcement and military forces around the world. Also, there is a never-ending supply of aftermarket components available to customize them to your liking and specific needs. Both of them are fairly affordable as well because they can be found starting for roughly $300 brand new and carry a Lifetime Warranty should anything ever happen to them. Both are available in every gauge and in right-handed and left-handed versions, so you can pick the one that suits you best.

There are other options available, too. Winchester and Browning both make great pump-action shotguns. Winchester makes some SXP models specifically for tactical or defensive situations. The Benelli Nova is a great shotgun, too, that also comes in a tactical model. There are a slew of lower-priced shotguns that can work, but remember that imported firearms may not have replacement parts available readily, and they may not work as well as more common shotguns. One good lower-priced option is Mossberg’s Maverick 88 line. These are based on the Model 500 and are decent shotguns, especially for home defensive purposes.

Some of the differences between standard hunting models and tactical models are that tactical shotguns often have higher shell capacity, shorter barrels and have wider ejection ports. Some have bigger, easier to find safeties too. You would definitely find those features on a semi-automatic shotgun, but the price will be much higher.

Hopefully none of us ever have to actually defend ourselves or family from a home invasion. However, it is one of those things where it is better to have and not need than need and not have. So as responsible citizens, we need to always be protected as is our right.

What do you think? What is your home defense firearm of choice? Do you have a shotgun for home defense? If so what do you use and what advice would you give? Let us know all of your thoughts in the Comments below.