In 1958, Savage introduced the Model 110 rifle. Of course they hoped for success, but I’m not sure that anyone expected that the 110 would be one of the best-known rifles some 60 years later. Not only has the Model 110 lasted, it’s improved and is better than ever. The Model 110 Storm is a great option for hunters and casual shooters alike, and is available in a plethora of calibers in right and left-handed configurations.

While the Model 110 has always been a favorite amongst hunters, it hasn’t always been the right fit for some. I’ve heard the phrase, “It just doesn’t shoulder well.” Like most mass-produced hunting rifles, fit hasn’t been something that’s been customizable. Well, in 2018 Savage tweaked their lineup and introduced the AccuFit system on all Model 110 guns. This instantly launched off-the-shelf hunting rifles up on to the same pedestal as some custom-fit rifles. Team that with the AccuStock and AccuTrigger, and the new Model 110s are hard not to love.

The Savage 110 Storm is available in a staggering 26 options, including left-hand models. For my test, I chose the trusty 30-06 Springfield. The first thing I noticed when unboxing the rifle was the upgraded look of the Model 110. Back in the day, the 110 wasn’t the sexiest of rifles, but it always got the job done. The new and improved look and ergonomically friendly design has serious appeal. With a gray synthetic stock and stainless barrel, the Storm seems as though it would handle any type of weather. The rifle comes drilled and tapped, which makes adding an optic a breeze. I had a Weaver base and a Bushnell XRS II on the shelf, which I added for the test. The matte-gray scope really made the whole package look good. 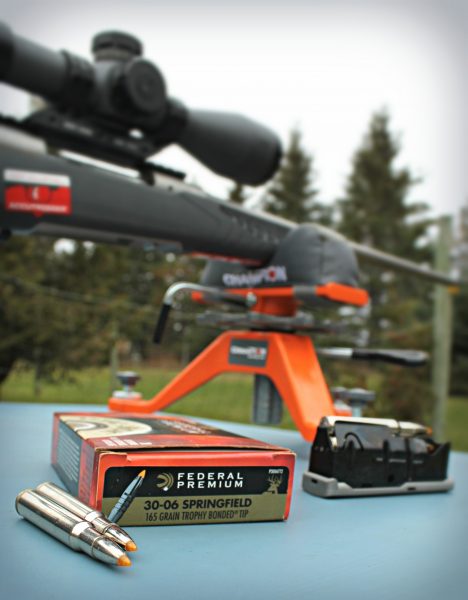 Everyone knows how important it is to have a good fitting stock. From comfort to accuracy, having a rifle with a stock that fits properly will always get the nod over one that doesn’t. Well, Savage’s AccuFit technology makes any of their stocks fit any individual that shoulders the gun. With a phillips-head screwdriver, adjustments can be made to the comb height and length-of-pull. It’s so simple, that the changes can be made in the field. Because everyone has different facial features and shapes, Savage’s new stock comes with five combs of different heights that are easily changed by removing the butt-pad. Heights, measured immediately behind the middle “leg” on the combs, are 1.2, 1.4, 1.6, 1.8 and 2.0 inches. This new stock also comes with four spacers to permit length-of-pull adjustment. Spacer widths, measured at the outer portion, are 0.25, 0.5, 0.7 and 1.0 inch. Proper stock length is important, especially if you have shorter hunters or growing hunters in your party. The gun can be adjusted as your children grow. One gun for all ages.

The AccuStock incorporates a full-length aluminum bedding chassis as part of the molding process. It runs from the rear action screw to just shy of the fore-end tip. This stability and rigidity translates to excellent accuracy, and is very lightweight. For example, the AccuStock on my 30-06 was just over two and a half pounds.

The AccuTrigger isn’t new, but it’s surely important to the Storm. Savage’s two-stage trigger has been around for many years, and has been copied over-and-over. When talking about a “two-stage” trigger, it’s simple to explain. The first stage is taking up the slack before hitting the breaking wall. The second stage is a crisp break that fires the rifle.

The AccuTrigger is fully adjustable, too. You, the shooter, can adjust the weight of the trigger pull. You can make it easier or harder to pull the trigger, which allows you to customize it to your needs. The 30-06 I tested had a trigger pull of just shy of 3 pounds, out of the box.

Have you ever shot a rifle, and weren’t exactly sure when it was going to fire? When this happens, you subconsciously anticipate the rifle going off, which can cause you to flinch, and shoot less accurately. With an AccuTrigger, this is completely eliminated.

I chose to test the Storm using the same ammo that I shoot out of my personal 30-06; 165 grain Trophy Bonded Tip from Federal Premium. The nickel-plated TBTs are accurate and deadly. I’ve had nothing but good luck on medium to large sized game, and have been very impressed with the consistent accuracy. The 110 Storm seemed to like them, as I shot through several boxes, and didn’t have any issues.

I’ve shot a lot of Savage rifles, and it’s no surprise when one performs well. The Model 110 Storm was no exception. While testing hunting rifles, I no longer measure MOA, as I’m looking at offhand accuracy, and groups at 100 and 200 yards were all sub-minute of vitals without much effort. I can comfortably say that the 110 Storm in 30-06 will not only put down any medium or large game animal in your sights, it’ll fit you perfectly while doing so.

You can find more information on the 100 Storm at Savage’s website.