Starting our series on the FN 509 review, we are bringing you our review of the FN 509 Midsize.

FN firearms have been in wide use by the United States Military, as well as other US government agencies, for quite a while. In fact, if you’ve served in the Army or Marine Corps in the last few decades, it is very likely that your issued weapon was an FN product.

I’m sure most of you are familiar with the M249 SAW and the M240 series of machine guns, as well as the Mk19, Mk46/48, all of which are made by FN. There is a soft place in my heart reserved for FN products (specifically the M249 PARA) but I’ve never owned one for myself, nor have I spent a lot of time with FN hardware outside of the military.

In addition to fire-breathing, lead-spraying, death-dealing machine guns and rifles, FN also makes a number of pistols you may be familiar with such as the FNX series, FN Five-seveN, and FNS pistols. In April of 2017, FN released the FN 509 series of striker fired 9mm pistols as an upgrade from their FNS series. The 509 pistols are only offered in 9mm (obviously) and come in a variety of sizes and configurations: midsize, standard, and tactical. 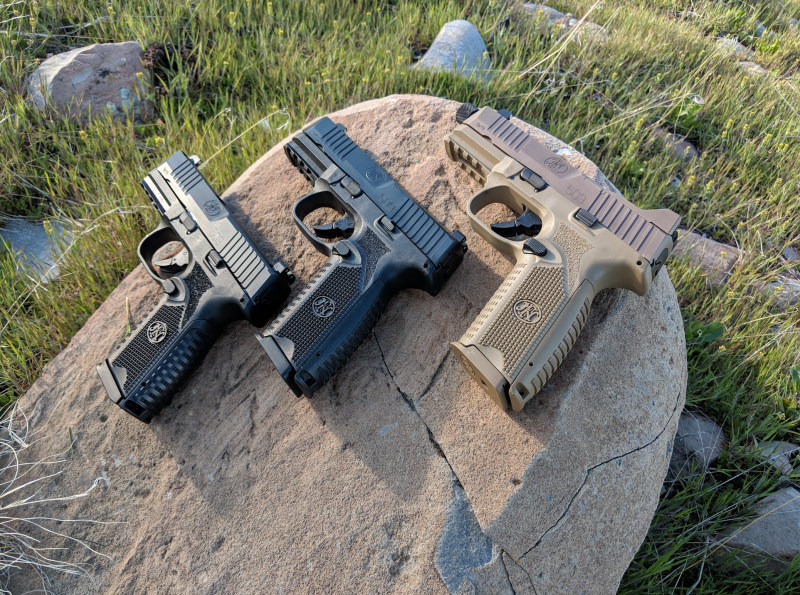 In this series of reviews, I will discuss each of the 509 series offerings having subjected them to an identical round count, of identical ammo, running identical drills. I’ll start with the 509 Midsize and work my way up to the 509 Tactical.

For those who are unfamiliar, below are the specs for the 509 Midsize according to FN:

In addition to the above specs, FN 509 Midsize also features all ambidextrous controls, which isn’t just nice for all those left-handed weirdos, but also nice for me when shooting one handed left hand. Producing fully ambidextrous firearms, especially pistols, is the direction most manufacturers are going, and I see it as a very good thing. Now if they could only figure out how to make an ambidextrous bolt gun… 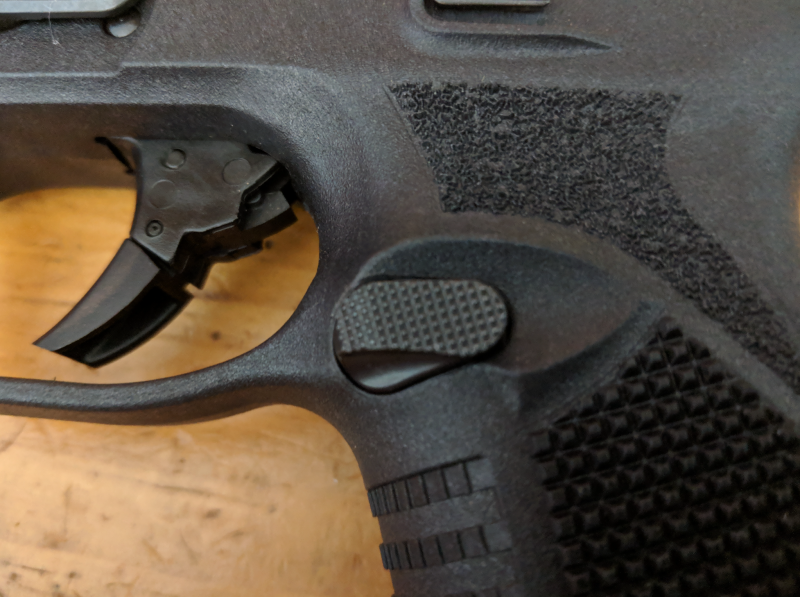 Other features of the 509 Midsize include: luminescent sights (standard in most pistols, but LE guns come with tritium sights), front and rear cocking serrations, mil standard 1913 rail for accessories, and a “technically” double action trigger. FN lists an MSRP of $649, and I’ve found them retailing for about $100 less.

I’ve been a Glock shooter for quite a few years and have grown used to a blockier, somewhat less intuitively ergonomic platform. When picking up the FN 509 Midsize, my mind went immediately to a Glock 19 (similar grip length) but without the “harsh” Glock grip angle. The grip angle on the 509 Midsize is similar to what you would find on most modern pistols, and upon presentation, the sights align with a neutral wrist attitude. FN also includes the option of interchangeable back straps, which is a feature that is nearing an industry standard.

The magazine release was easily activated without having to adjust my right hand, and so was the slide release. After a few dry reps on my strong side, I decided to try the same thing weak side, to see if the 509 Midsize favored one over the other. With little surprise, I found the pistol just as easy to operate left-handed as I did right-handed; both the magazine release and slide release offered nearly identical force to operate. This isn’t a trivial examination for those shooters who are left handed, as there are plenty of “ambidextrous” firearms out there which clearly favor a right-handed shooter in spite of left-hand friendly controls. 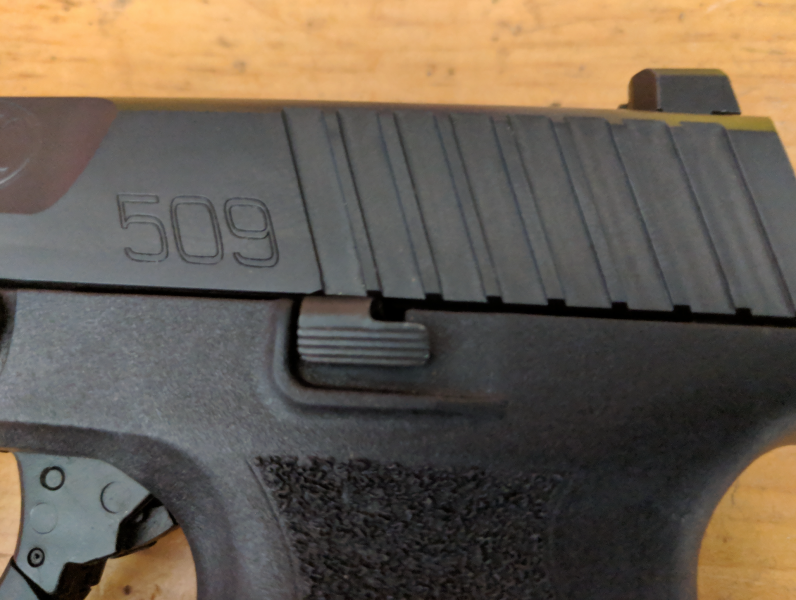 The sights are a pretty typical and unremarkable 3 dot “luminescent” configuration. The rear sight offers a nice shelf for one handed charging. There are also plenty of aftermarket sight options if the factory offerings don’t agree with your tastes. I think the sights are just fine. The only change I would make is to either get a blacked out rear sight, or more than likely, since I’m cheap and lazy, simply paint the rear sightblack. I usually carry a flashlight on all my pistols (both to reduce recoil and to see what I’m shooting at) so I’m not super concerned about having tritium sights, and feel the factory front sight would suit my needs nicely. 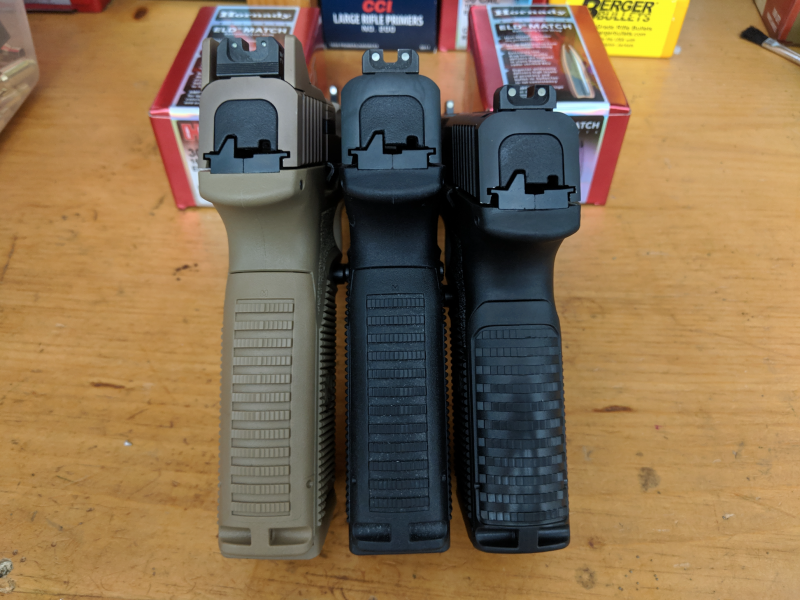 The trigger is one area I think could use some work. It’s a bit drawn out, and heavier than I’d like even considering it’s a factory trigger. I didn’t feel like it affected my slow fire very much, but I certainly noticed it when I was trying to shoot quick. Luckily there are a number of aftermarket trigger upgrades available for the 509 series of pistols.

As stated above, I did the exact same drills with the exact same round count with all the guns in the 509 series. To be clear, this wasn’t intended to be a torture test, nor was it intended to find the point of failure of these pistols (I think their reliability is pretty well established) but to test their “shootability”. Can these pistols perform to an acceptable accuracy, rate of fire, and general usability standard?

I did a walk back drill with the 509 Midsize starting at 25 yards, with a goal of making it to 50 yards without missing a C-Zone steel target. I’m pleased to say the Midsize passed with flying colors. I didn’t miss a single time during the walk back, and went 5 for 5 at 50. I’d say this is more than adequate for a pistol intended to be used for concealed carry. Strong work, FN.

After the walk back drill, I did a number of higher volume, faster cadence drills which culminated in the Bill Drill. It took a few reps to really nail down my grip, and the difference of how to drive this gun under recoil compared to my Glock, but I think I got it figured out. The 509 Midsize felt a bit unruly when shooting at a quick cadence and requires more from the shooter to achieve acceptable accuracy with low splits. Although it took a bit more effort for me to shoot this gun quick, I would say that it was an issue that could be entirely resolved with a bit more time on the gun and some minor adjustments to the trigger and sights.

This is one area where I did want to test the system’s reliability a bit in addition to ease of use. I fully loaded two of the 15 round magazines and shot one round, dumped the mag, and inserted another, then shot one round. I repeated this until both magazines were empty. I didn’t experience any malfunctions due to the somewhat harsh treatment of dropping fully loaded magazines onto the hard rock covered ground. I also didn’t have any issues with the ergonomics of quickly dropping the magazine or inserting one.

Overall, I’d say the FN 509 Midsize is an excellent option for those who want a good compromise between a single stack, sub-compact gun and a full-size gun. Because of its more neutral grip angle, I believe it’ll be easier for newer shooters to get a hold of, and be comfortable with, than a Glock 19 (which is my favorite concealed carry option by the way). I would feel comfortable suggesting this to friends and family for self-protection, and it may even find itself somewhere in my safe.

Check back tomorrow for Part 2: the Standard size FN 509

Interested in a 509 Midsize? You can buy yours HERE.

You can also read part 2 in this series here