This is part 3 in my series exploring the FN 509 lineup of pistols. So far, I have covered the FN 509 Midsize and the Standard. This article will discuss the largest (but not by much) of the pistols in the FN 509 series – the FN 509 Tactical.

Though the following paragraph appears in the previous two articles, I believe it bears repeating here for those readers who are only interested in this particular pistol: FN firearms have been in wide use by the United States Military, as well as other government agencies, for quite a while. In fact, if you’ve served in the Army or Marine Corps in the last few decades, it is very likely that your issued weapon was an FN product. They have made historically made cutting edge and reliable firearms, and continue to do so. 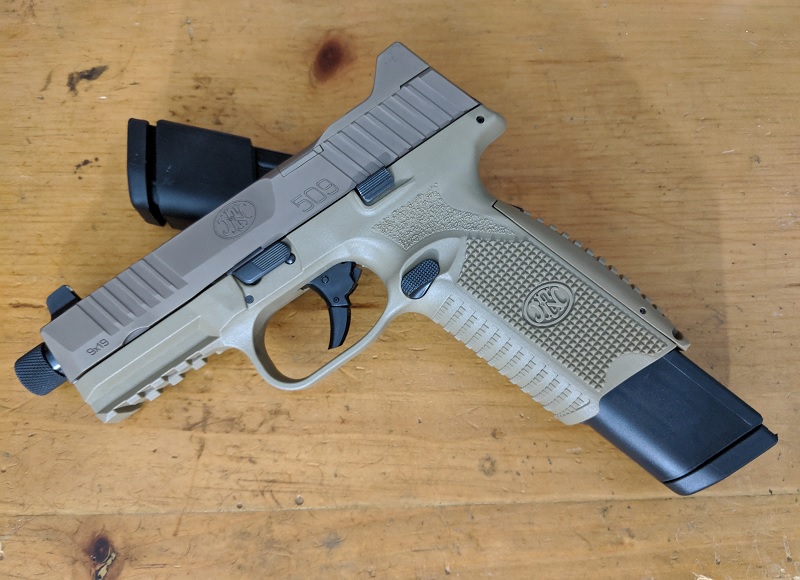 I have listed the specs of the FN 509 Tactical below as stated by FN:

If you have read the previous articles you’ll notice that, again, the 509 Tactical shares a great deal in common with the Standard and Midsize models: same sight radius, trigger, and nearly identical weight. The main differences being barrel length (0.5” longer as it is threaded) sighting options (includes optics cut), as well as the sights themselves, color options, and the most noticeable difference being the MSRP ($1049).

Some readers may note that I omitted mentioning the difference in magazine capacity, which is true. I omitted mentioning magazine capacity because the same 17 and 24 round magazines can be used in any of the 509 series pistols. I would consider the inclusion of the magazines to be more of a accessory difference than a performance difference, and anyone so inclined could buy a Midsize or Standard 509 model, and a grip of 24 round magazines, for less than the cost of a 509 Tactical.

Upon first grasp, the 509 Tactical felt very similar to the 509 Standard. The trigger is the same between all 509 models, the slide release is the same, and the grip has the same back strap modularity. After doing a bit of dry fire a few days before the range session, I noticed that for some reason it was a bit easier to activate the magazine release with the 509 Tactical as compared to the Standard or Midsize pistols. 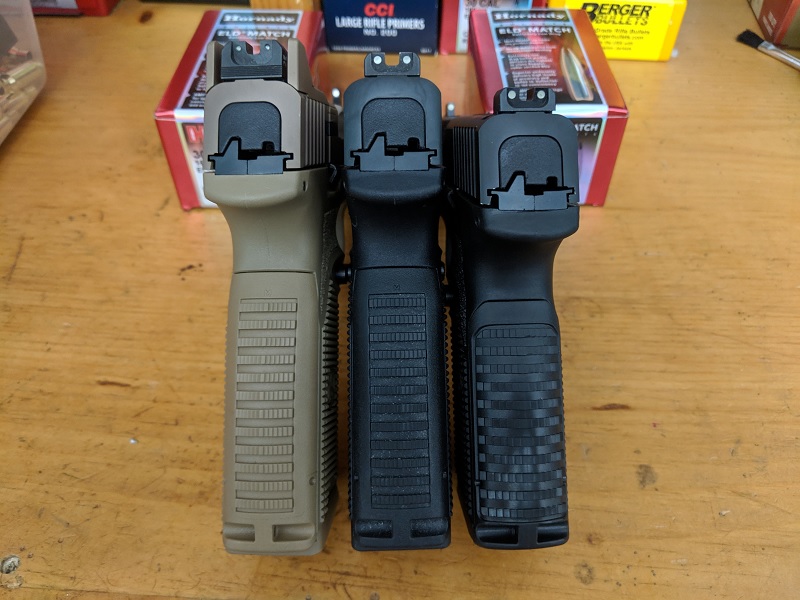 At first, I thought that maybe I had simply become accustomed to the placement, size, and shape of the 509 magazine release. It wasn’t until after my range session that I discover there was an actual physical difference in the magazine releases, although a very small one. When I got home from the range I got out my calipers and measured the protrusion of the magazine release on each pistol. The 509 Midsize and Standard measured the same, but the Tactical had about 0.035” greater protrusion on each side. I’m not sure why this is the case, whether intentional or not, but it did make the 509 Tactical easier to operate in that capacity.

The sights on the 509 Tactical were great. The rear sight includes tritium inserts surrounded by all black, and a nice “shield” protecting it from side blows. The shield is an integral part of the optics cut cap, and is therefore removed when an optic is mounted. There is no white on the rear sight, or any other color, to distract the shooter’s eye from the bright white front sight, which also includes a tritium insert. In my opinion, the sights on the 509 Tactical were much nicer to look at than the sights of the other 509 models. The sight difference manifest itself more clearly during lower light shooting, and fast cadence shooting, where I was better able to keep track of the front sight during recoil. 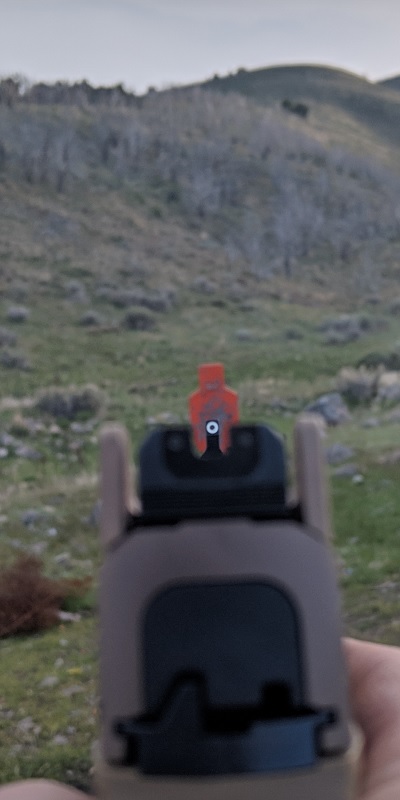 There have been a lot of advancements in small arms over the last decade, and particularly in the last 5 years or so. One significant advancement, and a rather positive one in my opinion, is the broad acceptance of red dot optics on pistols. A large number of tactical pistols, and some standard models as well, have included an optics mounting option. The FN 509 Tactical includes an optics cut as a standard feature, which makes a lot of sense given its intended application. 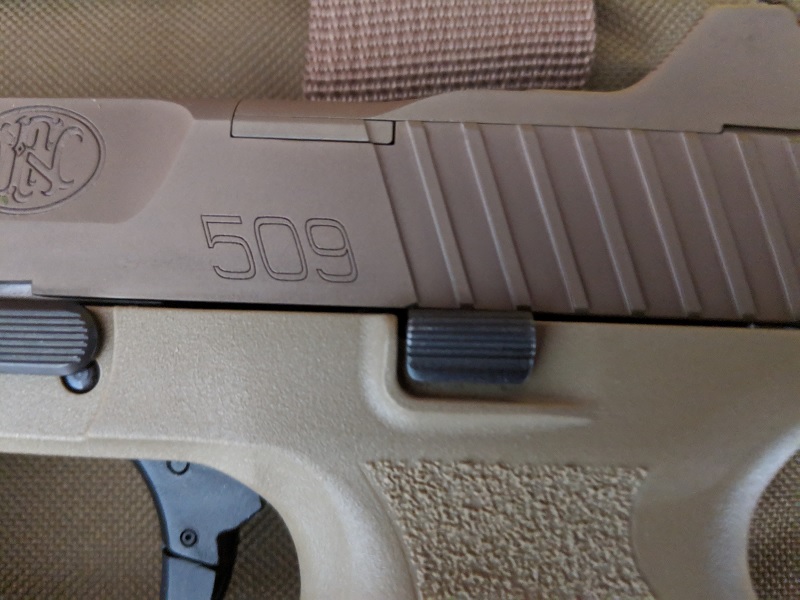 I would think that with an additional $400 in MSRP that FN would have included a premium, or at the very least, somewhat of a more refined trigger in the 509 Tactical. No such luck. The trigger in the Tactical model is the same as the others in the 509 series, but more disappointing because of the price of the gun.

The walk back drill with the 509 Tactical went very well. For some reason, maybe because I had quite a bit of time on the 509 series guns by this point, or because of the better sights on the Tactical, I found it easier to engage the C-Zone target at all distances out to my final distance at 50 yards.

The feel of shooting the 509 Tactical at speed was exactly the same as the 509 Standard, since they are nearly identical in the parts of the gun that make contact with shooter’s hands. The most significant difference being the sights. I found it easier to keep track of the bright white front sight during recoil and I noticed that I sent each shot down range with greater confidence because of it.

In order to keep the round count consistent between the pistols, I only loaded the 24 round magazines with 17 rounds. I then repeated the same drill as with the other two pistols: shoot one round, dump the mag, insert the other magazine, then shoot one round. I repeated this drill until both magazines were empty. As expected, there were no functional issues with the magazines. 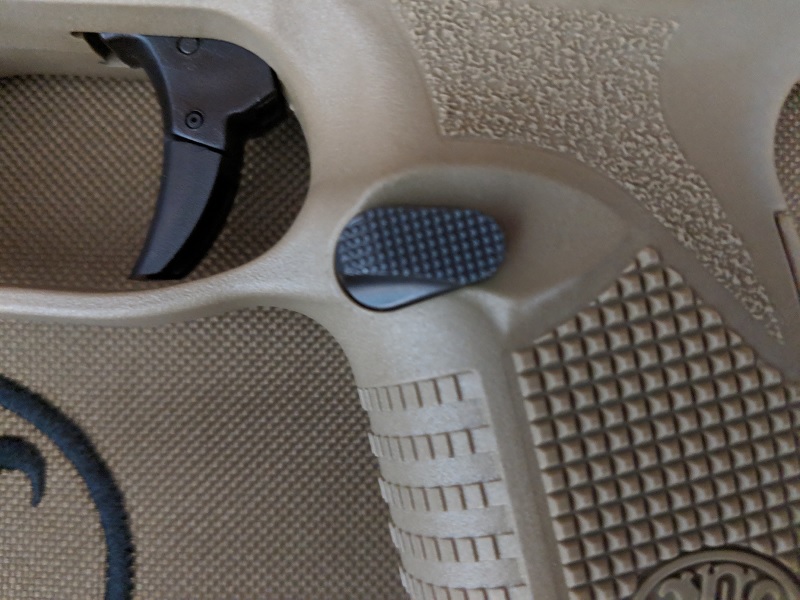 Because of the greater protrusion of the magazine release, and the fact that the sleeve over the base of the larger magazines made for a more ergonomic transition from the toe to the body of the magazine, mag changes were quite a bit smoother and easier to execute.

Overall, I really enjoyed shooting these three pistols. Although they have far more similarities than differences, I think that they each fit a different application well: The Midsize makes a very nice conceal carry piece, the Standard makes a smart all around duty or home protection pistol, and the Tactical does well as a cutting edge, high speed tactical pistol (with a trigger upgrade, that is). I would be able to sleep soundly at night knowing that if I had any one of these three pistols in my safe, and I needed a firearm to protect my family, I would have a reliable, accurate and deadly tool at my disposal.

I like all of these pistols, and if I could only have one, I would choose the Midsize. Although I really like the 509 Tactical, and think that it is a well thought out, smartly designed pistol, I would have a hard time digesting another $150 – $200 on an upgraded trigger that should have been included with the gun in the first place. All things considered, though, I would like to congratulate FN on producing a very high quality, accurate, and reliable line of pistols that fit well among other contemporary offerings, which would be a sound choice for most any shooter.