Imagine for a moment that you are only allowed to own one rifle…for the rest of your life. What caliber would you choose? You can have any make, model or action type, as long as you only have one rifle, in one caliber. The choices are almost endless but I’m fairly certain of the one caliber that I could endure with for the rest of my life: the .30-06.

There is little doubt the “aught six” as it is sometimes referred to, has stood the test of time. The cartridge was also called “30 Govt’ 06” by Winchester and was adopted by the US Army in 1906, hence the 06 designation. The “thirty- oh-six” has been in use by the US Military from 1906 to present day. 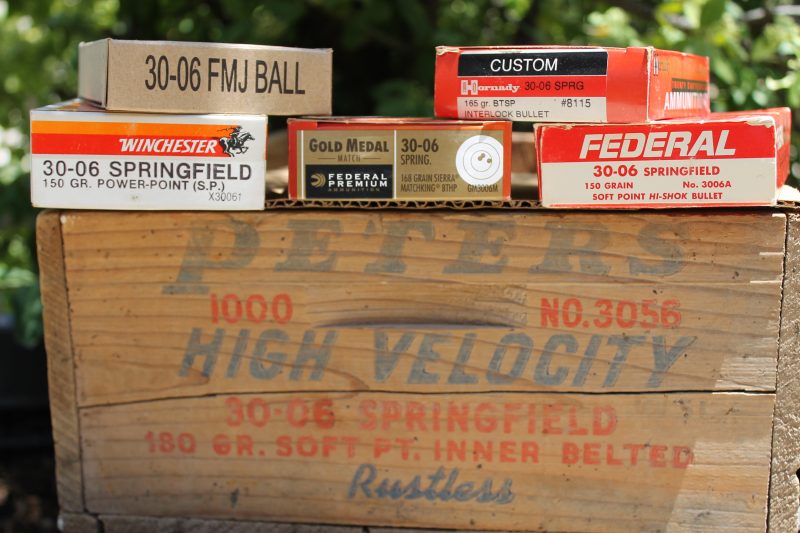 For every person reading this, their needs for a rifle and individual preferences will vary greatly. Aside from the ever common rimfire cartridges, I personally have utilized calibers from .222 Remington to the .458 Winchester Magnum for everything from plinking, to hunting, to competition, and law enforcement. There are of course many rifle calibers I have no experience with. So why would I choose the .30-06 for my one rifle caliber? Understand that I am also very familiar with many of the more “modern” cartridges and that many folks will disagree that the .30-06 is deserving of adoration when so many other choices abound.  My reasons are outlined below.

My most extensive experience with this cartridge comes from hunting. I’ve no doubt the .30-06 can take any game anywhere on the planet. Would it be my first choice for say elephant or buffalo in Africa? Probably not, but I’ve personally seen Cape buffalo harvested with this cartridge. In addition, personal acquaintances of mine who serve as game rangers in Zambia have utilized the .30-06 for elephant on occasion. It goes without saying, shot placement is critical no matter what caliber you are shooting. Having taken a variety of big game in both the US and Africa with this long-standing cartridge, I need little convincing of its ability.

It is well known the military has and continues to use the “aught six.”    Starting in World War I with the M1903 Springfield and then with the M1917 Enfield, M1941 Johnson semiauto, and of course, the M1 Garand semiauto during WWII and beyond. Numerous machine guns have also utilized this caliber. Although the .30-06 has seen diminished use in the US military today, it most likely remains in the military arsenal as a sniper cartridge or other specific needs.

Suffice it to say that American law enforcement has utilized the .30-06 over the years from agencies such as the FBI, US Border Patrol and dozens of state and local departments. While it is not likely to be at the top of the list today, it has earned its place over many years of law enforcement service.

I could go on and on talking about the legacy of the .30-06 in rifle shooting competitions such as the well-known Camp Perry National Matches and the wide selection of rifle action types, ammo choices, and ammunition availability both far and near. A wide offering of factory ammunition choices for various needs continue to be available with bullet weights from 110 grain up to 220 grain.

Aside from the absolute fact that the .30-06 has been and is still in use around the world for over 100 years, ammunition for this chambering can be found far and wide, a critical factor in my estimation. There are indeed flatter shooting cartridges with less recoil and better ballistics today, but the .30-06 can hold its own against the more modern era cartridges.

I recently read an article where a misguided author bashed the ole .30-06 proclaiming that it “sucked.” Aside from the preceding points and my personal experience, a real-world story that convinces me that more modern is not always better is as follows–

In 1985 while on a tour of Zambia with personal friends who worked with Zambia Parks and Wildlife I found myself in the wonderful position to do some hunting to provide food rations for park staff. Two rifles and a shotgun were provided for this endeavor. The rifles were a Winchester Model 70 chambered in .458 Win Mag and a Model 70 in .30-06. One small problem, only a handful of cartridges were available from parks and wildlife for the .30-06. A half-day drive to several hunting camps in the area produced 30 to 40 rounds of .30-06 ammo for my use. End result, the park staff was well supplied with meat for quite some time. Aside from some express magnum calibers that safari camps were not willing to part with, none of these camps had excess ammunition available except in .30-06. As stated, this cartridge can still be found around the world today.

Back to the crux of this article, if I had to live with one rifle caliber for the rest of my life I know I could get by very adequately with the old 30-06. I could harvest any game in the world, have a more than adequate precision distance capability and come closer to finding ammo in trying times than “more modern” rifle calibers. While I enjoy many of today’s newer calibers, I will never give up on what has been time-tested and proven over generations of time. Perhaps neither should you!