Either way, here are three reasons why you need a CRKT M21 O2G as part of your EDC kit:

This falls into the category of..  DUH! But, think about it for a moment. Some threatening encounters happen when you “can’t carry” a pistol or they happen in extremely close combat type situations. In those moments, having an EDC pocket knife such as the CRKT M21 O2G is your fastest, most efficient, most effective weapon.

Since your first intention is to use the CRKT M21 O2G as an EDC weapon, you need to train with it. No, don’t go around stabbing and slicing your friends up. But, practice pulling it out and engaging with it. You train with your other weapons, so why not train with this too?

First aid situations never occur at the “right time”, but you can be prepared for it with a CRKT M21 O2G. Sometimes you simply need to get a splinter out, or cut away a little skintag. Other times, you may have to cut clothing off of a badly injured buddy/family member. And if you are prepared, you’ll be working against time.

Imagine you came up on a car wreck and the occupant was trapped inside by their seatbelt. What would you/should you do? If you have a CRKT M21 O2G on you, you would cut the seatbelt and remove them from the scene. If you weren’t carrying a CRKT M21 O2G (or another type of EDC pocket knife), they may not survive before help arrives. 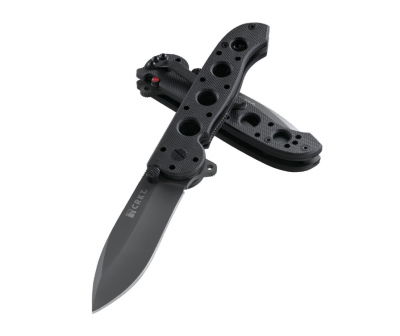 And finally, and this is the “big” one, you need to carry a CRKT M21 O2G so you can open packages. Okay, so we’re being a little sarcastic here, but it does help.

When your wife is on here 15th package from Amazon this week, it’ll be a whole lot easier cutting into the box with a CRKT M21 O2G pocket knife. And since you already have it on you (part of your EDC kit), you’ll be the hero she wants and needs.

With the cost of a CRKT M21 O2G being so relatively inexpensive versus what you get, there’s no reason why this shouldn’t be part of your EDC arsenal. Even if you carry another type of EDC pocket knife, you can never have too many pocket knives.