Tips for Calling Squirrels to Enhance Hunting Fun and Success

Tips for Calling Squirrels to Enhance Hunting Fun and Success

Hunting is a lot of fun and a great way to spend time outdoors. It is also a great way to get kids outside and away from the digital universe we all deal with on a daily basis. The use of game calls adds a new element to hunting. It makes it more active and brings the challenge of communication to the hunt. Much like waterfowl or elk hunting, squirrels can be called in. Calling squirrels is more challenging than you might think and is a great thing to teach yourself or a young hunter. Here are some tips for calling squirrels to enhance hunting fun and success. How Can I Call Squirrels When Hunting?

There are quite a few commercially available squirrel calls on the market, but don’t be confused or discouraged. Here some things to keep in mind when taking on the “art” of squirrel calling:

Calling squirrels is no different than calling other game animals. It doesn’t work 100 percent of the time, but more often than not it will give you an edge. Don’t expect miracles and employ patience and you’ll find calling a great tool in your squirrel hunting arsenal.

What Do A Squirrel’s Calls Mean?

The three varieties of squirrels found in North America are the red squirrel, the fox squirrel and the grey squirrel, which is commonly found in both grey and black color phases depending on where you are. All of these squirrels make the same basic vocalizations.

There are five basic sounds a squirrel makes that you can imitate. You don’t have to master all of them, and each sound is relatively easy to reproduce. And above all, remember that you don’t have to be perfect.

What Types of Squirrel Calls Can I Get? 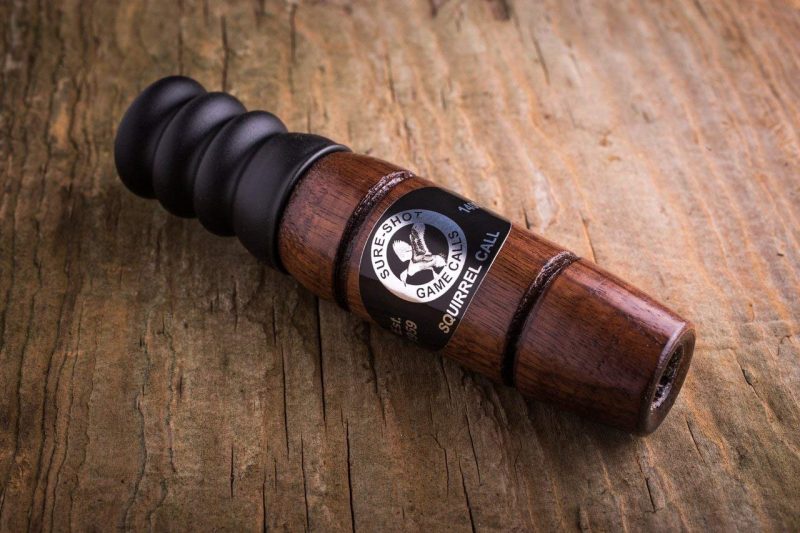 Most squirrel calls on the market, like the Sure-Shot Game Calls Squirrel Call, are bellows-type calls that generate a bark, excited chatter, and perhaps a distress call. The Sure-Shot call is made from dark walnut with a traditional bellows actuator. As an added bonus for deer hunters, this type of call is the perfect thing to have with you in the deer stand. If you make an unexpected noise, you can often cover your tracks, so to speak, by tapping out a couple of quick squirrel barks.

For cutting, I use an old Lohman’s Game Calls cutter made of a threaded plastic bolt with a plastic paddle scraper. You might choose to make your own cutting call from a variety of materials. Use a seven-inch coarse-thread bolt and washer (or rub the edges of two quarters together) to emulate cutting.

A young squirrel distress call is usually made with a whistle-type call, like a Faulk’s Game Calls Squirrel Distress Call, in conjunction with a small, leafy branch. The call emulates a hawk going after a small squirrel. The squirrel whistle creates the distress while the branch flapped on the ground imitates the sound of the predator’s wings as it tries to capture the squirrel.

Do I Need to Use a Squirrel Call?

No, you can squirrel hunt without using a call. However, squirrel calls and using them while hunting is a great teaching opportunity for you and a younger hunter. It helps kids understand the animal more if he or she learns the different vocalizations and it adds a depth to the hunt by making it more proactive. You and your young hunter aren’t just sitting there, hoping a squirrel happens by, although that is a pretty decent way to spend a few hours. An inexpensive squirrel call, an orange hat and a small caliber rifle, air rifle or small shotgun, and you’re all set.