In this day and age, people think that technology will solve all their problems. Technology may light up your home, give you some entertainment, and even save your life. However, technology doesn’t quite solve everything! When you are lost in the woods while hunting, hiking, or camping and you have no cell phone service, technology ain’t going to do much for you. Henceforth, learning basic survival skills is a must! If you are an outdoorsman, such as I, you may want to learn some basic survival skills. Even though the outdoors is a place of wonder and enjoyment, it can also be a place of danger. Basic survival skills such as water collecting, shelter making, fire starting, and trapping are very helpful. For it may save your life! When you are stuck in the wild, these skills will be very handy.


This being said, calories are very important in a survival situation. Without food you simply cannot get the calories you need. The average calories we burn a day is about 1620. When we are in the wild, we tend it burn more than just 1620 calories. Food is critical to stay alive in the woods. How can you get food in the wild? It is simple. You must trap for your life.

The basic tools you need to build every trap in this list are:

The Basic Snare is the most simple survival trap. 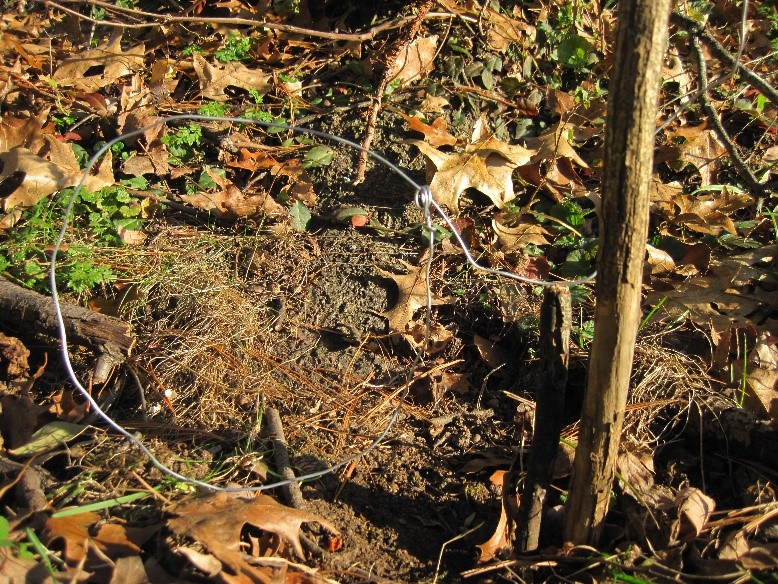 It is constructed from one stick and some snare wire. You simply tie the snare onto the stick. The animal walks through the snare (noose) and it tightens around him. It is ideal to trap chipmunks, squirrels, and rabbits. Setting the trap in game trails or nests are the best areas to set this snare.

The Run Through Snare is very similar to the basic snare. 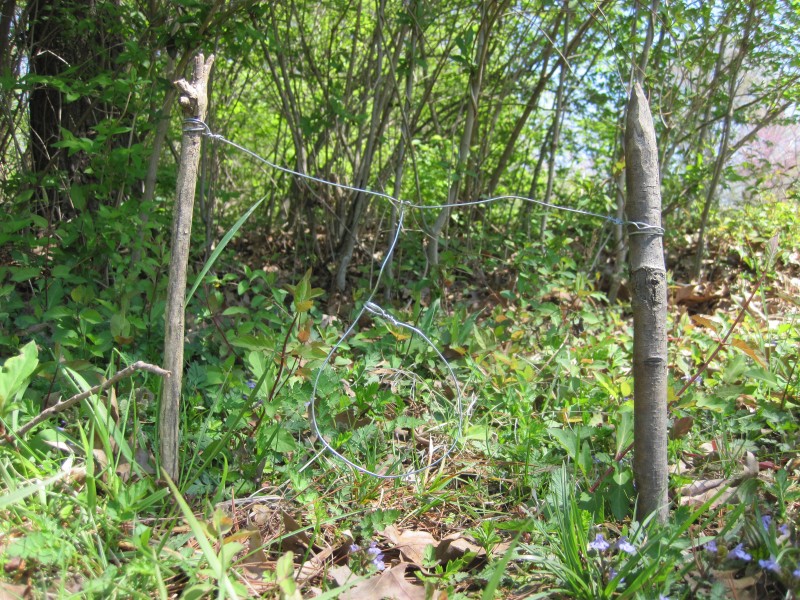 The animal is trapped the same way as the basic snare. It is constructed of two sticks, some wire, and the snare wire. This snare is ideal from trapping chipmunks, squirrels, rabbits, and groundhogs. Setting this trap in game trails is ideal.

The Lift Pole Snare is a snare that triggers when the animal enters the snare’s noose. The pole gets lifted up into the air once triggered, trapping the animal. This snare is constructed from an “Y” stick, an “L” stick, a long sturdy stick, a rock, some string or duct tape, and the snare wire. The snare is circled red in the image. This snare is ideal for trapping chipmunks, squirrels, and birds.

The Squirrel Snare is a snare attached to a long branch (or a squirrel’s ramp, as it is known by) that is leaning against a tree. When the squirrel travels down the tree it will see the “ramp” and travel down the ramp instead. It then traps itself in the snare. This trap is designed only to trap squirrels, hence the name. Placing this trap against an oak tree that bares nuts is ideal.

The Pencil Snare is a snare that triggers once the animal enters the snare’s noose. 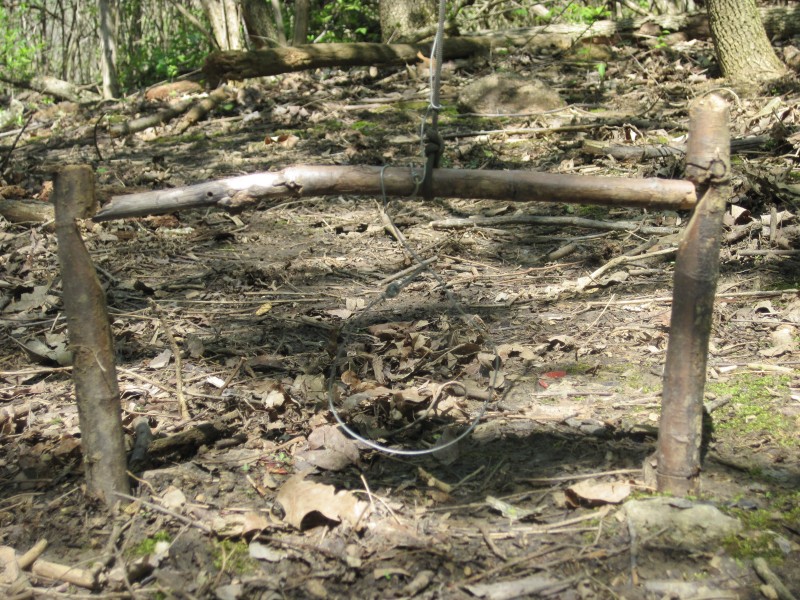 The snare is attached to a stick called the pencil. The pencil stick is set in place by two sticks. The sticks have two carved grooves to keep the pencil in place. A flexible sapling has paracord or bank line tied onto it so it pulls force on the pencil.  The snare triggers by an animal pushing the pencil out of place causing it to fly up in the air. This trap is recommend for squirrels, rabbits, and small opossums.

The Trigger Snare is also a snare that triggers when the animal enters the snare’s noose. This snare is similar to the pencil snare, but is used to trap larger animals. This trap is constructed from two sticks, some paracord, and snare wire. One stick is anchored into the ground while the other stick latches onto the anchored stick to keep the trap in place. The snare and the paracord, which is attached to a flexible sapling, is connected to the latching stick. When the animal walks through the snare, the latching stick comes out of the groove in the anchored stick. It then releases the trigger, and it traps the animal. This trap is ideal for trapping opossums, groundhogs, raccoons, and foxes.

The Spring Snare is nearly the same trap as the trigger snare. 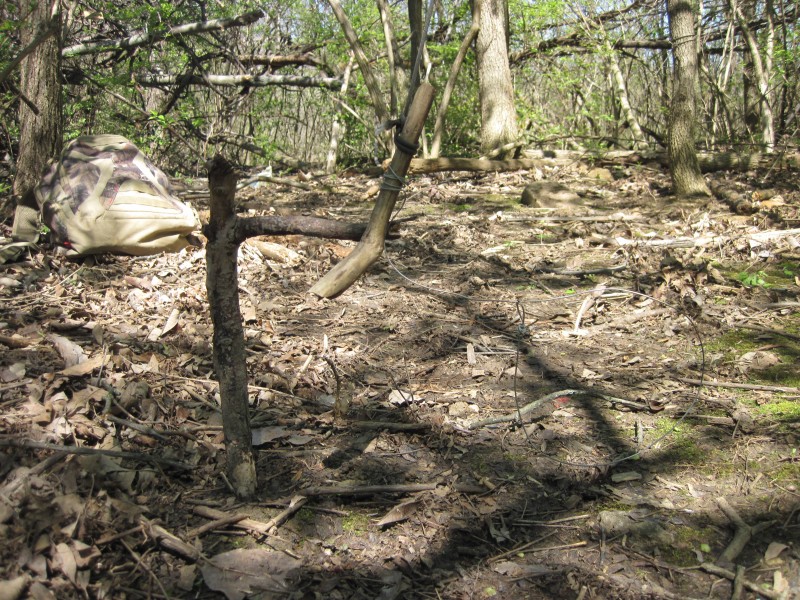 The only difference is that the sticks already can naturally attach onto one another. Cutting a groove into the stick is unnecessary. It is construct from an “L” stick, a latching stick, paracord, and some snare wire. The animal walks through the snare’s noose and pushes the sticks off each other, releasing the “spring” and trapping the animal.

The Basic Deadfall is a trap that falls on to the animal once triggered. The Two Stick Deadfall is a trap that also crushes the animal once the trap is triggered. The Paiute Deadfall is one of the most used survival traps. These ten traps will help you trap for your life! They are great traps to use in a survival situation. For all snare traps I recommend using 18 (ideal for raccoon) to 24 (ideal for chipmunk) gauge wire for the snare itself. Try building all ten traps and find which traps work best for you. Remember, there are laws regarding trapping.