Do you want to increase your coyote count? There are a variety of locations, tactics and gear you can put into play, but let’s go straight to the Staples “Easy” button: Stay longer on your stands and your coyote count will increase.

I have good friends who hunt coyote meccas such as the Nebraska Sandhills, South Texas and New Mexico deserts. They don’t waste time on stands and tell me so when I extend my stay more than 15 minutes. But many of the locations I hike are not coyote paradises and reflect those places you likely have access to while hunting. Those areas are defined by heavy hunting pressure, repeated calling visits, and even competition from subsidized hunters who use the aerial advantage to decrease predator numbers.

Short-duration setups have been a predator hunting tradition for years. Spend your 15 minutes on a stand and if nothing shows, then move on to the next location. I agree, but only if you live in a coyote-rich environment and have ample locations to visit. Then by all means don’t waste your time. Now for the rest of you, here’s why spending more than 15 minutes makes sense.

First, with the advancements in volume and quality sound from today’s new digital callers, your invitation reaches farther than ever before. Coyotes could come from more than a mile away to investigate. If the terrain is craggy, that could slow a coyote down even more, and it might be arriving just as you are leaving.

Second, coyotes respond with different vigor depending on their personality, message you delivered, and their paranoia level at the moment. That means they could run in faster than Usain Bolt if they anticipate a great meal or territorial intruders. On the other hand, they might not be in a hurry, especially if your message was invitational in nature. They could walk in like a bored school kid kicking rocks along a sidewalk on his way home from school. And if they have an “everybody is out to get me” attitude, it could slow them down further with only peeks to see what’s up.

So how long should you wait?  That depends on your patience level, location, call message and coyote density. From years of eyes-on observation in open-country settings, I can tell you with extreme confidence that coyotes educated at the school of hard knocks can take 20 to 45 minutes to reach shooting range. Deep snow and rough terrain also slows coyotes. If their hunting has been lean due to low prey densities or winter’s wrath, then they might beat the 15-minute mark, but I routinely kill more coyotes at the 30-minute mark than earlier.

The last coyote I killed came in after more than 40 minutes of waiting. My coyote dog, Sage, was above me and on watch when I heard a subtle growl from her. I did a quick scan and saw the reason for her growl: a coyote. Sage shot past me ready to engage, but I whistled to stop her as the coyote was already within shooting range. Seconds later, Sage was tearing into a dead coyote that the average hunter would never have seen if they walked away at the 15-minute mark. Stay longer and get more coyotes. 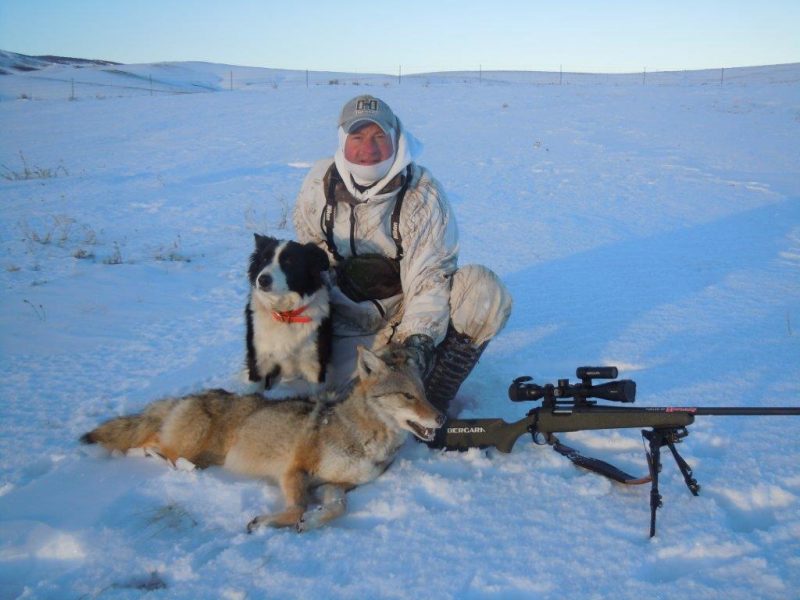 The author shot this coyote after nearly 45 minutes on stand. His gear included a Bergara B-14 Hunter rifle in 6.5 Creedmoor and fueled with Hornady Superformance ammunition. Nikon optics helped in spotting, ranging and aiming. Mossy Oak Brush camo in a snow pattern and his decoy dog, Sage, aided in a successful ruse.

Editor’s note: Be sure to check out CarbonTV for free, on-demand predator content such as “Coyote Country.” Watch and enjoy!