A couple Februaries ago I harvested my first and (to date) only wild boar. My primary motivation was a desire to put organic meat in the freezer and create recipes. And while the smaller good-eating wild hogs typically don’t produce American-style “streaky” bacon due to anatomy and the absence of belly fat, I was able to craft a beautiful Irish-style bacon using the eye of the loin and a wet Wiltshire-style cure.

Making home-crafted, or artisanal small batch back-bacon and other wild charcuterie is easy, and the results are mouthwatering. It’s a matter of four very simple steps – two, if you elect non-smoked meat.

Loosely, Wiltshire-style is a wet-cure developed in England in the 18th century. Prior to the Wiltshire method, a slaughtered animal would be hung in a damp basement and then dry-cured with lots of salt to preserve it over the winter. Health regulations outlawed that practice around 1870. It was about that time the Harris family in Wiltshire County, England, discovered that you could use much less salt if the meat was kept wet and chilled.

What is Wild Boar Irish Bacon?  Essentially, it is the same as Canadian or British-style bacon. Geography tends to dictate what you call it, and there are slight variations as to what part of the middle-meat you actually use, but all of the three come from the back, and specifically a part of the loin. (Also known as the backstrap.) All are considered back-bacon.

1:  Start with a trimmed eye of the loin and submerge in a wet-cure (cure recipe below). Store covered in the refrigerator for at least 48 hours and up to 4 days.

2:  Pull the loin out of the brine and set on a drying rack. Set the drying rack on a cookie sheet and put it back in the fridge. Do not cover. You want to air-dry the loin for 2-3 days to allow the sugar and salt to make a nice thin crust. Make sure to rotate a few times so even the rack marks get a chance to dry. This thin, dry skin layer, known as the pellicle, will coax a smoky crust of deliciousness once the loin is put into the smoker. If you don’t want to smoke your Irish bacon, then you can stop right here. Slice it thin, fry it up in pan, and dream about your next hog hunt. But, if you like it smoked, then keep reading.

3:  Fire-up your smoker, and put in your loin. For wood, this recipe used hickory, but you can use pecan, apple-wood, alder, whatever you prefer. Depending on the size of your wild loin, smoke for 2-3 hours, or maybe more if you have a beast. My loin took only a couple of hours because it was small.

4: Once the bacon is out of the smoker and has a chance to cool a bit, drizzle it lightly with Courvoisier, bourbon, or whatever you want. Historically, a fortified wine, or Irish whiskey, would have been used as an antiseptic to preserve the meat for eating at a later time. In this case, we sliced up the warm loin, and drizzled more Courvoisier on the rashers because it tasted so good. Typically, rashers (bacon slices) should be lightly drizzled, not doused, as it would overpower the flavor of the cure and the smoke. You can easily omit the alcohol if you wish.

All there is to do now is load up a moist and tender slice of warm bread with a hunk of sweet creamery butter, rustic artisanal mustard, a smoky and savory rasher of crusty drunken Irish bacon goodness, top it with the tang of a dill, and revel in a bite of unsurpassed wild hog heavenliness.

I kid you not! This was worth every mile driven, and every day hunted. But be warned, once you set this out for your guests, it will disappear faster than a hog running for the mesquite underbrush.

Recipe: Half-Gallon of Juniper Infused Brine (may be halved for small loins)

To make the herbal infusion, or tea that will flavor the brine:

In a small saucepan combine:

Heat the tea to a boil and then simmer 5-10 minutes.

While the infusion is simmering, add ½ Tablespoon of pink sodium nitrite #1 to the reserved water. Nitrite makes meat less prone to bacteria and enhances color. (Nitrite #1 is for fast release and short cure times. It is used in brining, smoking, and canning. Nitrite #2 is slow release and suited for dry cured meats like salami, prosciutto, etc., that require aging.) For more on sodium nitrite and its use in curing meat, please see the fact sheet at The Meat Institute.

Remove the tea from the stove and pour into the reserved water.

Drop in the wild boar loin. Cover and refrigerate for 48 hours. Once the wet cure is complete, both the ham and the loin will be ready for the smoker.

About the Author: Raised a Minnesota farm-girl in a hunting family, Krissie Mason (below) is an outdoorswoman, food enthusiast, and has been reconnecting with her culinary country roots and family hunting traditions of late. She is the brains and brawn behind Scratch + Holler media, and a regular contributor to several outdoor websites. Krissie fully supports a field-to-fork wild food chain, and especially enjoys expanding pantries and stretching wild game palates with her ambitious and delicious wild game recipes. 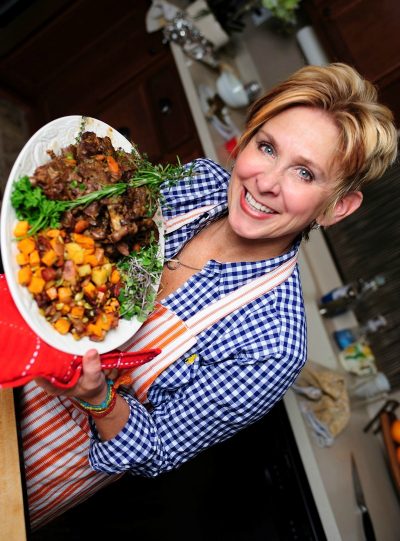