For me and many avid hunters across the United States, spring means turkey hunting. However, even though I can’t pursue whitetails until September, my mind never wonders far from deer. That means during the next week or two here in the Midwest, I’ll be frost-seeding clover. And then in late May, I’ll take a break for an hour or two from turkey hunting to control weeds in a few existing clover plots. Here’s the reality: Just a little bit of food plot work this spring can make a big difference this fall for deer hunting.

There’s nothing complicated about frost-seeding clover, and you don’t need large and expensive farm implements or even an ATV. In fact, as the frost comes out of the ground, the soil is often too soft to work with a compact tractor without getting stuck and messing up the field.

All you need is a simple broadcast spreader and a bag of clover. Ideally, you’ll have an existing clover plot that was looking a bit sparse last fall, or a soybean or brassica field that was eaten to the ground by whitetails. The key is the presence of exposed soil – even if that dirt is under a couple inches of snow.

The idea behind frost-seeding is taking advantage of melting snow, late-winter and early-spring rains, and the freeze/thaw cycle common during March and April. But you don’t need all three of these components to have a successful frost-seeding experience. In fact, my experience has taught me that frost-seeding works well without snow, and even without the freeze/thaw cycle. During those snow-free springs when I was a bit late to the game and didn’t get clover broadcasted while the evening temperatures dipped below 32 degrees, the spring rains still worked their magic and the result was a decent clover field.

One more thing – you might be asking yourself, “But don’t I need to conduct a soil test, then spread lime and fertilizer to have a decent food plot?” Yes and no.

As we’ll cover in later articles, these steps are important to producing top-notch food plots in some parts of the country. However, when it comes to food plots, I believe that doing something is better than doing nothing at all. If you don’t have the time or money to go the soil test/lime/fertilizer route, then it’s better to broadcast clover – now! – than throw in the towel and do nothing.

And this is an important point, too: If you wait for the fields to dry out enough so you can drive on them with a compact tractor or ATV with a disk, then work the soil to perfection with a disk before broadcasting clover, all you’re really doing is bringing dormant weed seeds to the surface (not good!) and missing out on timely spring rains and existing soil moisture. I’ll say it again: Don’t wait! 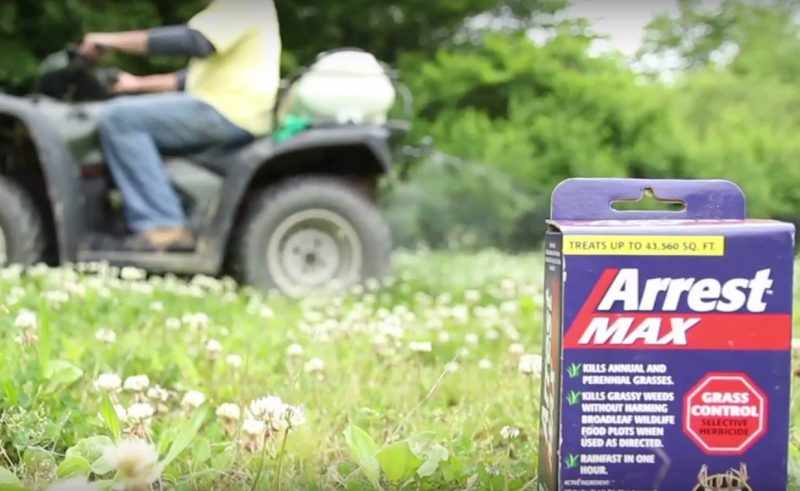 Existing clover plots ­– those planted last spring or a few years ago – will probably need some love to ensure they produce the most forage for deer this summer and fall. The easiest way to maintain existing clover fields is by regular mowing and applications of herbicides to control weeds. I’ve had outstanding results with two products from The Whitetail Institute: Arrest Max, which controls grasses, and Slay, which controls broadleaf weeds. (Note: Slay must be mixed with a surfactant or oil additive, such as Sure-Fire Crop Oil Plus.) Check out the how-to video below for more information on using Arrest Max and Slay to maintain existing clover plots.

Good luck this spring on turkeys, but don’t forget about your deer. Spend an hour frost-seeding fields now and then another couple of hours spraying for weeds in late May and you’ll have fantastic food plots fields – and great deer hunting! – this fall.