Much of a wild tom’s time is spent trying to establish dominance on his home ground, especially early in the spring, which means he’s in a nearly constant state of agitation. Throughout the turkey season, hunters can use the birds’ natural aggression to their advantage. By making a strutting tom, along with a gobbler call, part of their decoy strategy, they can likely raise the ire of any hormone-fueled tom within hearing distance.

While there are a number of full-body strutting decoys available today, GHG Decoy Systems put a different spin on things with its new Jekyll and Hyde Tom Turkey Decoy ($79.99; below)—a strutter with a split personality. Its unique back-to-back design features an amped-up tom with a vivid red head on one side, and the pale blue head of a passive gobbler on the other. 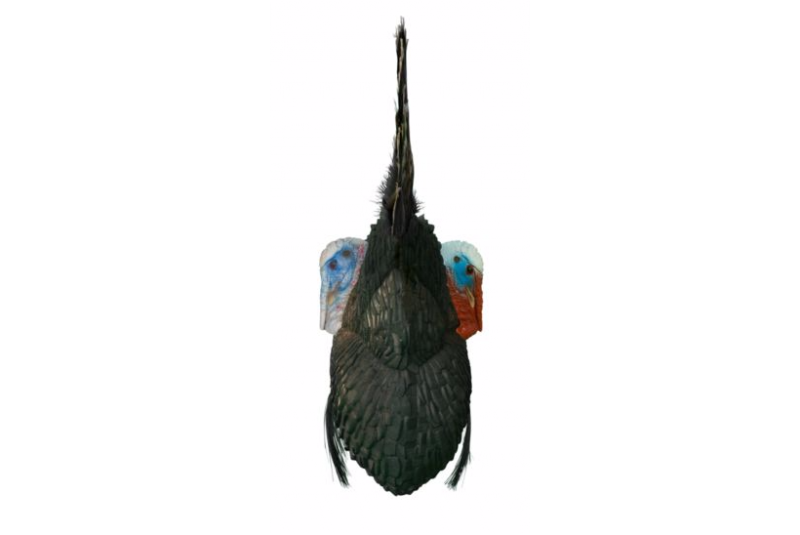 It has enough body mass to give the package some three-dimensional depth, and a fabric fan that adds realism when viewed from either side. Unconventional, for sure, but gobblers in the mood for a scrap don’t take notice—and it keeps them guessing all the way into shotgun or bow range.

When using any tom decoy, a gobbler call is a must, and the Primos Double Gobble Turkey Call ($19.99; below) is a great choice. Just pump or shake this call to produce the full-throated tone of a tom looking for love, or a fight—whichever comes first. Plus, a handy silencer cap eliminates accidental noise when a hunter is on the move.

Even during the peak of the early gobbling period, however, when toms are trying to dominate the neighborhood, a hunter can run into a wily old bird that hangs up the second he sees anything out of sorts. In that case, a full-strut decoy that appears to move naturally can often seal the deal. The key being natural and controlled movement.

Avian-X has a new piece of gear that does just that. Called the Lifeline 360 ($24.99; below), it’s basically a ground stake equipped with a pulley system and 90 feet of para-cord, that allows the hunter to remotely rotate his favorite decoy to face a challenging interloper—just as a real turkey would do, and that’s a move even a smart old tom can seldom let slide. 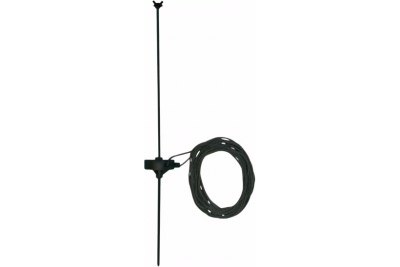 When actual mating activity commences, noted by the absence of gobbling throughout the day, it’s time to swap gears with decoys. By this time a pecking order among the males has been fairly sorted out, and fighting isn’t at the top of their to-do list anymore. Depending on a property’s size and terrain, it will probably hold a small number of true boss gobblers, a larger number of submissive toms that have already taken a few butt-whoopings, and any number of jakes in an area.

None of them are really looking for a fight, but they’ll all take advantage of an opportunity to breed a hen if there isn’t a bigger, tougher male in the vicinity. Even a boss tom thinks more about love than war now. A single-hen set is often all that’s needed to lure in a tom, but sometimes more is better. A gobbler that stands off and demands the hen come to him, for example, might have had an unpleasant experience around a decoy in the past, or it might just be his nature. Either way, it’s a missed opportunity for the hunter. 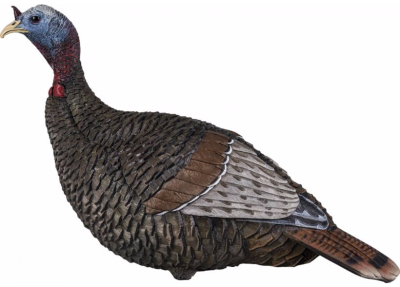 Add a jake to the set, though, and the tom’s drive to eliminate competition often overrides his instinct for self preservation, and he’ll rush the decoys with fury in his eyes. Put a realistic looking jake decoy, such as Flextone’s new ¼-Strut Thunder Jake (49.99; above), or the new LCD ½-Strut Jake ($119.99; below) from Avian-X, near a hen decoy and there’s sure to be fireworks when Mr. Big shows up. 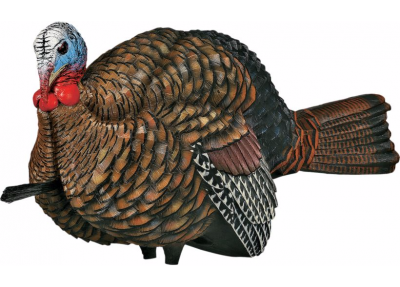 More often than not, simply setting the hen and jake decoys where they can both be seen is enough to light a gobbler’s fuse. One strategy, however, is to set a partial-strut jake decoy behind one or two hen decoys, as if he’s trailing them. That often seems to heighten a tom’s sense of urgency.

One rule about using jake decoys, though—don’t set more than one. In the real turkey world, a gang of three or four delinquent teenagers will send even a battle-wise longbeard running over the hill. And the sight of a pair of young bullies harassing a hen might make him think twice about approaching the set.

Arguably the most productive set during this period is a jake decoy tending a receptive hen laying belly-to-grass. A gobbler must see the situation as a sure thing, but one that requires immediate action. All he has to do is push the lone young lothario aside and step in, and if things go right, that’s what he’ll do.

Avian-X packaged its ½-Strut Jake/Laydown Hen Combo ($149.99; below) exclusively for Cabela’s this season. The decoys are perfectly paired, in both body position and head posture, making it difficult for even the human eye to tell them from the real thing. Immaculate attention paid to head and feather detail in the manufacture of these decoys makes them look all the better.

Fanning is a tactic that is far from new, but has gained a lot of traction among hunters over the past few years. They typically reserve it for a gobbler that, no matter how exquisite the decoy set, or how sweet the calling, just won’t come into range. A perfect example is a tom with a small harem of hens that hangs out in a pasture all day long. A hunter can guild the invitation a dozen ways, but the bird won’t accept.

Belly crawling behind the expanded fan of a previously harvested turkey until in range is about the only way a hunter can bag one of these birds. The idea is to use the terrain to approach the flock unseen, then begin closing the distance using the tailfan as cover and a lure at the same time. Just don’t get too close to start with. A hunter who waits until he’s in the tom’s lap before popping the fan will likely as not scare it into the next county.

Instead, show the fan about a hundred yards out and make a slow stalk, giving the gobbler time to work himself into a state over the approaching trespasser. When he senses that his personal space has been invaded, he’ll rush the fan. That’s when a smart hunter gets ready to shoot because he’ll usually be within range in a matter of seconds.

Fanning traditionally meant scooting the shotgun forward, then crawling a couple of feet—all while holding the fan upright in the other hand. Mojo Outdoors simplified things with a series of products designed for scoot-and-shoot type hunting. They incorporated a clamp-on bi-pod that held the shotgun in shooting position and a hub that secured a fabric tailfan. 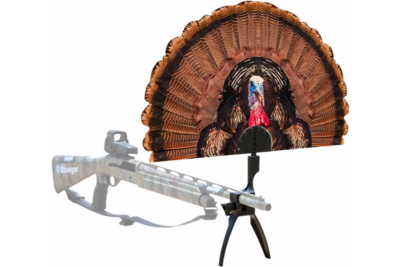 The Tail Chaser MAX ($39.99; above) is this year’s new and improved version. The bi-pod is basically the same, but the fabric fan is larger, for better concealment, and it sports a painted turkey head for a more realistic look. The unit’s hub was also designed to accept a real tailfan, if the hunter chooses to go that route. Either way, the advantages are obvious—the shotgun is always in the ready position; there’s little chance of debris entering the muzzle during the stalk; and the sightline to the quarry is unobstructed.

Fanning is an exciting way to hunt wild turkeys, but it comes with responsibilities. First, make sure it’s legal where you hunt; in some places stalking a turkey is prohibited. Second, do it ONLY in wide-open spaces where your shot won’t endanger other people, livestock or property—and more importantly, where you’ll be far out of range of any type of cover than might conceal another hunter. Never EVER attempt to fan a turkey in woods or brush, or the hunt might wind up being your last. 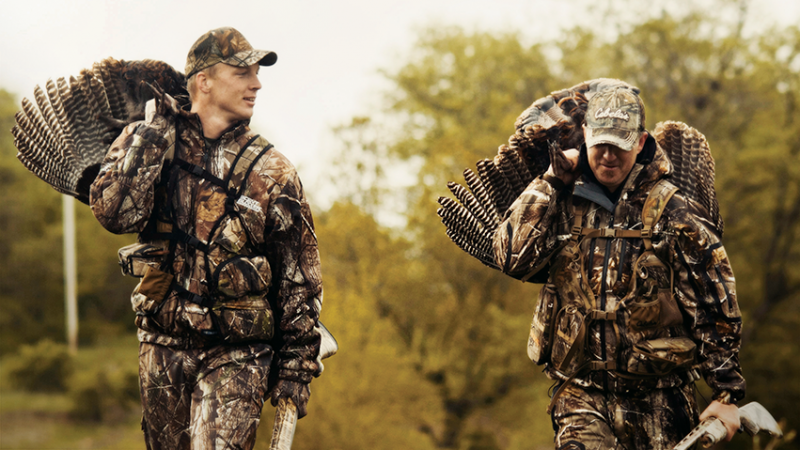 Consider the tactics and gear outlined here before you head out after your gobbler this season; they might just make achieving your goal a little easier. Good luck and be safe.