Be it pheasant, wild turkey, steak and kidney, crow (yes, crow!) or leftover waterfowl from the freezer, meat pie happens when pastry meets filling. This huntsman’s delight on a plate can be open, closed, small or large, but almost always savory.

In An A-Z of Food and Drink, John Ayto wrote: “The idea of enclosing meat inside a sort of pastry made from flour and oil originated in ancient Rome, but it was the northern European use of lard and butter to make a pastry shell that could be rolled out and moulded that led to the advent of true pie.”

The ancient Egyptians first published a recipe featuring a decadent rye dough filled with goat’s cheese and honey. Now, doesn’t that sound scrumptious for ancient Roman food? I think it’s a certain shoe-in over locusts any day of the week.

Over the course of time and geography, pies evolved into simple, portable pockets designed for individual consumption. Recipes, cooking techniques, meal presence and presentations varied according to culture and cuisine. (This was all “b.s.” of course; “b”efore “s”andwich.) The need for nutritious, long-lasting food that was easy to store and carry seemed be a driving force. Think pierogi, calzones, pasties or turnovers.

In stark contrast to Roman honey pie is Umble pie, which is made from chopped or minced deer innards. “Umble” is an etymological derivative of “numbles,” meaning the heart, lungs, liver and other wobbly bits of a deer. In turn, “numbles” is taken from the Old French word “nombles,” the plural of “nomble,” meaning thigh muscle of deer. Tracing even further back on the linguistic timeline, “nombles” comes from the Latin “lumulus,” meaning loin. Somewhere along the way, an “H” was added to “Umble” to indicate the Humble pie was made of insignificant, or inferior parts; what we would now consider offal, or awful, depending on your point of view.

While I haven’t made Umble (or Humble) pie, I have made pie from crow breasts, and so I have quite literally eaten crow! To my surprise, the meat was quite tender; similar in flavor and physical properties to beef when prepared as a Yankee Pot Roast. The wild crow wasn’t gamey, nor chewy, owing to a hard cider brining in advance, and a slow braise in silky vegetables while nested inside the sealed flaky golden crust. Eating crow had never been so satisfying!

If you’re a culinary braveheart, here is a recipe for an Old World game meat pie suitable for turkey, various upland birds, waterfowl, crow or even deer innards. Bon Appetit!

Cut the leek in half lengthwise, then 1/4s, then 1/8s and dice. Slice mushrooms, dice carrots and peas, chop parsley, strip thyme sprigs and rough cut. Dice potatoes, core and dice one apple.

Heat 12-inch cast iron skillet over medium heat, add butter, (or bacon grease if you have it), then sauté leeks and mushrooms for 2-3 minutes to cook off the water in the vegetables.  Add carrots and more fat as needed. Add about 1/4 teaspoon salt and cook another 5 minutes.

Next, throw in the peas, and potatoes and mix.

Hit with 1/4  teaspoon of salt, and about 2 tablespoons of flour and mix. If you (or someone in the kitchen) didn’t drink the remaining hard cider leftover from the gamebird breast brine, now is the time to add to the pan. Or, pop another, and add approximately 10 fluid ounces. Add the parsley and thyme now, too, and mix.

As the mixture simmers, slowly add some chicken stock in 1/3-1/2 cup increments. You are looking to thicken the mixture to a gravy-like consistency. You kind of have to feel your way through this step. Just think Grandma’s Thanksgiving turkey gravy. This step will take about 30-45 minutes.

Once the mixture has reached its silky thickened state of deliciousness, add the brined gamebird breasts to the pan. Basically, you’re going to poach the breasts for a little bit in the vegetable sauce to partially cook. At this time, also add the diced apple to hit the meat and vegetable pie with a hint of sweetness.

Once the bird/meat is partially cooked, remove the cast iron pan from the stovetop, and remove the breasts/meats to a cutting board. Dice the meat and add a little salt, too.

Now, back into the pan with the veggies. Turn out the whole works into a bowl to cool while you prepare the crust.

Turn on the oven, preheating to 350 degrees.

Into a pre-chilled 8- or 9-inch cast iron skillet, brush butter and then sprinkle lightly with a little salt. This keeps the piecrust from adversely interacting with the cast iron.

Put in your first piecrust and gently mold to shape. You want a generous amount of crust hanging over the edge. (Pre-made is fine, but if you want to mix up your own dough, it’s easy and the result is a much flakier crust than what you’ll get from store bought.)

Once your base crust is in the pan, let it sit there for 5 minutes to stretch and relax. While the crust is settling into the pan, roll out your second crust. Put an “x” in the middle to create a small opening for the pie bird/vent. The old-fashioned pie bird the will let out steam as the savory breast/meat bakes in the oven.

Now it’s time to add the cooled mixture into to the skillet. Set the meat in the middle, top with second crust, fold under and pinch the edges however you want. Just be sure to seal the crusts to one another, and pinch the dough to ceramic pie bird to seal there, as well. You want as tight a package as possible before putting in the oven.

Beat the egg and liberally brush onto the crust. Pop the pie onto the lower rack in the oven and bake for 45 minutes to an hour. Time can vary depending on how thick you made the crust, the size of your skillet, and the accuracy of your oven, so keep an eye on things and adjust as you go. If your crust is brown before the veggies are done, cover loosely with aluminum foil to protect from burning.

When the ringer dings, remove the pie and let rest a good 30 minutes or more, allowing the hot ingredients to firm up and pull together. Don’t be surprised when your family and friends flock to the table to devour this savory Wild Game Pie.

About the Author: Raised a Minnesota farm-girl in a hunting family, Krissie Mason (below) is an outdoorswoman, food enthusiast, and has been reconnecting with her culinary country roots and family hunting traditions of late. She is the brains and brawn behind Scratch + Holler media, and a regular contributor to several outdoor websites. Krissie fully supports a field-to-fork wild food chain, and especially enjoys expanding pantries and stretching wild game palates with her ambitious and delicious wild game recipes. 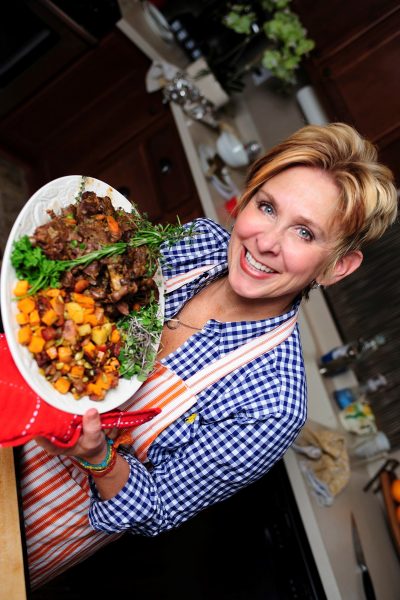