Early Season Panfish Problems – The Right Line for the Job

Early Season Panfish Problems – The Right Line for the Job

While most anglers don’t give second-thought to the panfish line they’re using, there are quite a few of us that have stumbled onto an open-water secret of sorts; braided fishing line can be superior for crappies and bluegills too, especially early on in the season.

Springtime panfishing can be as good as it gets. Active fish in the shallows play ball long before many larger gamefish are ready and willing, or are legal to pursue. With fish piling out of the depths and closer to shore in preparation for spawning, there are a few challenges for bluegill and crappie anglers alike.

First and foremost, anything shallow typically involves cover, which is especially true for crappies that prefer bulrushes, brushpiles, and other woody cover. Gills too can favor heavy cover, and are often found in and around lily pads and their maze of tangled roots. Pair tiny panfish jigs and light mono varieties with whippy rods and heavy cover, and you’ve got a recipe for frustration. Moreover, you’ll be replacing jigs by the minute, or fishing tentatively toward the outside and edges, which many days simply leads to less success. Strength and durability in a fishing line then are incredibly important to the shallow-water angler.

Another primary issue with fishing shallow involves keen sets of fish-eyes that can be boat-shy, especially in pressured waters. Clear water obviously exacerbates the effect, and with colder water temps long before the algal and vegetative blooms of mid-summer, we see some of the clearest water conditions of the year during this calendar period. Thus, long bomb-casts are the norm on lakes like these if you hope to stay ahead of the fish, but that can be difficult with memory-ridden coils of traditional mono.

Spring weather patterns can also be notorious for blustery conditions for days on end, making for difficulties with both line management and casting distance. I have a farmer buddy and fellow panfish fanatic in Wisconsin that fishes more days a year than most guides, but he won’t fish in wind. Cold fronts, barometer swings, and unstable weather are no problem for him, but high winds kill the ability to detect strikes and fish effectively when using mono or fluorocarbon. 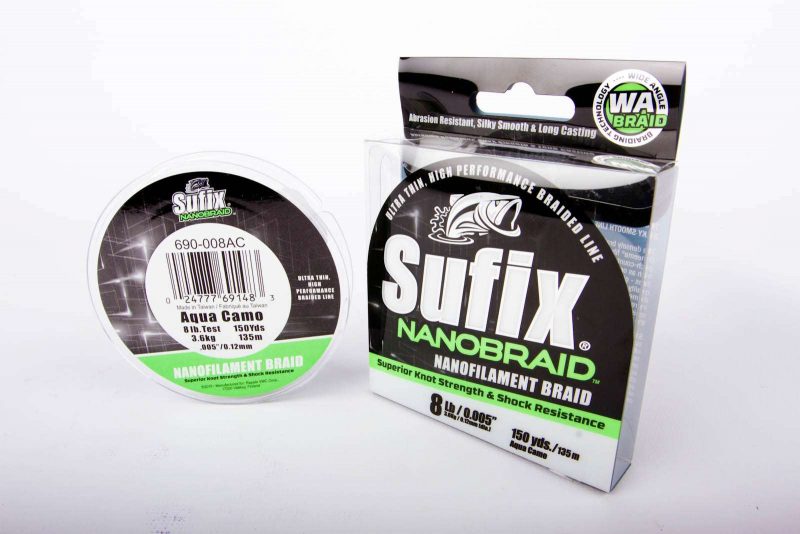 Braid solves the bulk of these issues, but not just any braid. If the most desirable traits in an early season panfish line are strength, durability, suppleness and casting distance, the newer Dyneema offerings such as Sufix NanoBraid are a no-brainer. But what about the visibility of braid and casting to line-shy fish in clear water?

“It just hasn’t been an issue for me,” said long-time Lindner Media guru, Angling Edge TV host, and fellow panfish nerd Jeremy Smith (below). Smith says that especially for active fish in the shallows, while a boat may spook them, direct tying NanoBraid to jigs hasn’t had a negative effect on his catch rate. Maybe it’s because he can present baits into cover you normally wouldn’t dream of casting to, as he readily admits: “The stuff cuts through lily pad stems, and you can always just straighten hooks on anything more solid you hook into. I can fish the same jig all season without losing it.”  Try that on your average 4-pound-test mono.

Toughness is the easy part, as all braids stand up well to abuse. The casting distance is what has really impressed me, and I first noticed that virtue when throwing light hair jigs in the fall to Mississippi River walleyes. Those fish are positioned just off the rocks, as they crash schools of shad and push them up against the bank. Fish too heavy a jig and you’re snagged before you can flip the bail back over. Too light, and you simply can’t cast it. That’s where the silky-smooth nature and tight weave of the NanoBraid comes into play. The stuff slips through the rod guides with far less resistance, and I found myself overcasting and snagging on shore before getting accustomed to how well it peels off the reel.

Sensitivity is just as you’d expect with any hard line, which really aids in bite detection, especially in windy conditions and a bow in your line. While there is no stretch or shock absorption, I’ve simply gone to adjusting which rods I use to compensate for the effect. My favorite is a longer rod such as the 7-foot light, xtra-fast St. Croix Panfish Series offering. It’s long without being overly flimsy, and offers some extreme casting distance due to that length. In heavier panfish cover, I’ve been using light walleye gear for years, and a great pick is the St. Croix Avid 6-foot 6-inch Medium-Light action rod. Truthfully, any rod over 6 feet with a medium-light action, and a fast or xtra-fast end section, will offer the casting distance, forgiving tip and backbone to straighten hooks or cut through vegetation.

I still have mono on a few panfish setups, especially bobber rods, but I find myself much more likely to grab a braid rod when casting. Equipped with these setups, you’ll find yourself slinging baits without fear into some really nasty stuff, and hauling out more panfish as the reward. You’ll also find yourself wondering why you hadn’t done it sooner.