Weed-bound walleyes are a worthy adversary given the traditional means we often use to pursue that species. A few hours of playing in the weeds sends most anglers to the relatively snag-free depths, where the worst hang-ups are caused by snail-shells or clams. Rocks at least stay put, and typically come up only a few feet off bottom. For these reasons and others, many anglers — myself included — have a hard time switching to weed bites. It’s seemingly so much simpler to fish bare hooks, keep your sinker off bottom, and stay away from the stringy stuff that can plague your tackle. 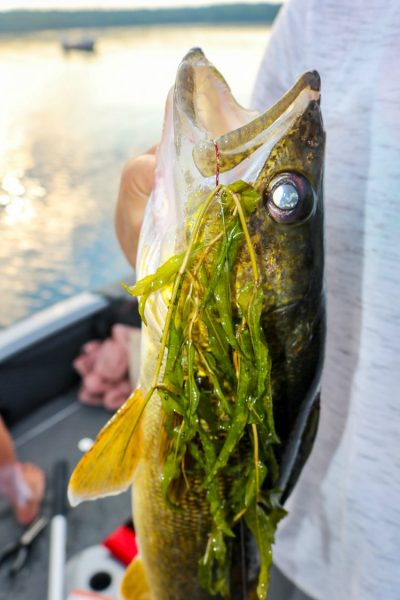 Ignoring weedy walleyes, however, is a mistake I’ve learned to correct over time, especially when there’s a good wind headed for well-developed patches of the walleye-favored cabbage (above). Coontail beds are a close second, with both weed species holding resident walleyes nearly year-round. When the wind kicks up, walleyes get the best of all circumstances in being shallow with more meal choices, along with the competitive predatory advantage of reduced light levels and mixing water. 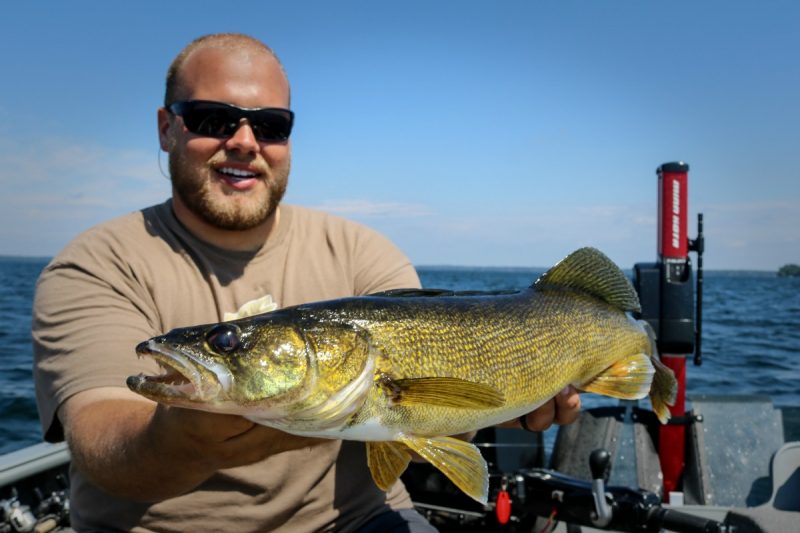 Always curious on how other anglers tackle weedy ‘eyes, I recently chatted up Brett McComas (above), editor of Target Walleye and competitive walleye angler in his own right. We traded a few nuggets, as he detailed his favorite weedy walleye bite that’s put him at the top of the heap in a few recent events. The beauty of it is the simplicity, and similarity to how so many live-bait rigging fans prefer to chase walleyes already. 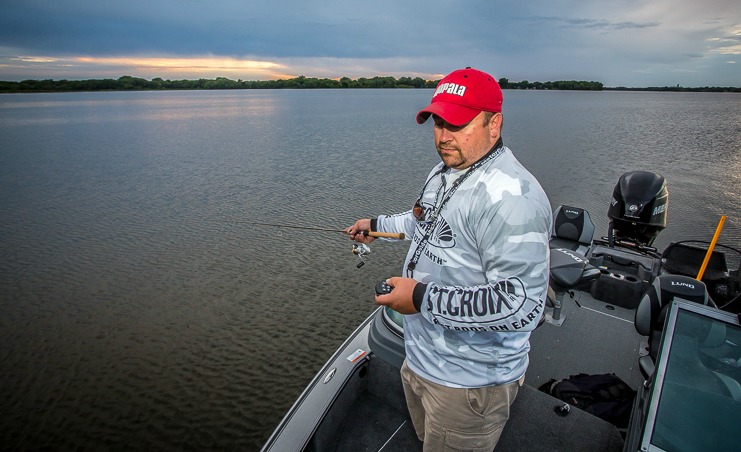 Brett mentioned a few keys to the weed bite, and the first starts with location. “This is a shallower pattern, usually anywhere from 9 to 14 feet, with emergent or barely submerged cabbage beds all around and shallower,” he said. “You’re looking for a complex of weeds that hold bait and inactive walleyes, but also for the areas just off the ‘wall’ where cabbage comes up 6 to 8 feet below the surface.” These areas hold fish that are actively eating, and maybe hiding just below the tops of those weeds.

Brett also highlights the other major component to the tactic, which is a good wind. Shallow fish present an interesting opportunity in that they’re typically more willing to eat than be resting, especially with a bit of wind. That said, cabbage thrives in relatively clear water lakes, and walleyes directly under-boat will spook without that very wind that both kicks the bite in gear and helps to hide your craft. McComas said, “One way to get away with borderline conditions is to simply let out more line and put your presentation further from the boat. It requires a bit more finesse to keep from tangling and snagging, but gives you the best opportunity to put your bait in front of fish that haven’t been pushed around.”

Ultimately, this technique is all about rigging. Start with a 1/8-ounce bass-style bullet-nose sinker (1/4 ounce if really windy), then a bead, tied off to the smallest swivel you can find (above). A tungsten sinker is preferred if you have one, mostly because of how small and unobtrusive it is in those sizes. “This sounds ultra-light, but remember that this is a shallow-water deal, so you’ll need plenty of line out behind the boat to keep from spooking fish,” cautioned McComas. “A thin, braided mainline lets me snap the rig out of cabbage leaves if it gets stuck, and feel bites with lots of line out. If your hook snags the stalk of the weed, you’ll likely have to pluck the whole thing out of the bottom.”

McComas continued, “This is one of the few techniques where I think it’s important to use a monofilament leader instead of fluorocarbon, simply because fluoro sinks and I don’t want my bait dragging on bottom if I drop down to super-slow speeds. I like using a 48-inch leader (usually 10-pound test, not less), as anything longer seems to get wrapped up in the cabbage stalks too often.” 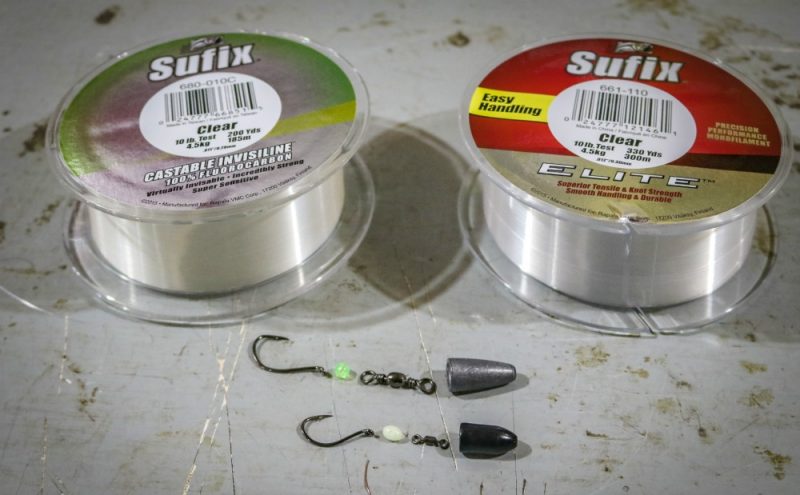 As for hooks, it’s time to downsize a bit. “I drop down to a #6 or #4 Octopus Hook,” he said, “or a #8 or #6 Walleye Wide-Gap Hook for the great hook-up ratios, yet streamlined shape that pulls through the weeds better than you might expect.”

As for the business-end of the rig, McComas favors live leeches because they’re cleaner compared to crawlers and can be rigged more quickly. But he also mentions that “a worm-blower enhanced ‘crawler usually gets more bites.” The beauty of this technique is that when soft plastics become necessary due to bait-stealing-bluegills, the lifelike leech and nightcrawler imitations are just as, if not more, productive than their real-life counterparts. “You almost have to fish them in areas with lots of ‘gills,” said McComas, adding that “they work just as well if the speed is bumped up a bit.” 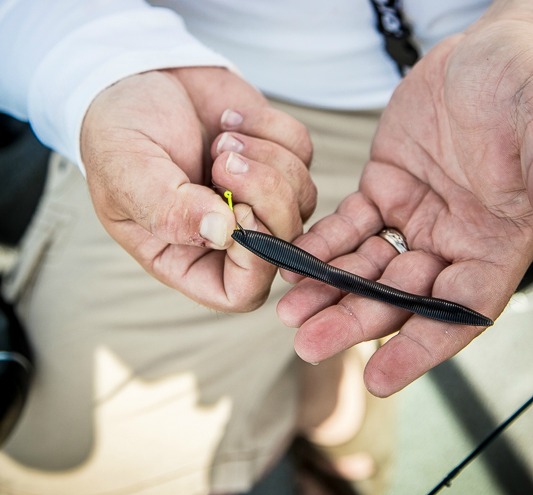 Soft-plastic leeches (above) and crawlers can also be rigged in a variety of ways, from nearly weedless Texas-rigging options to slow-death styles that cause the bait to spin seductively in the water. Whether you use live bait or the next best (often better) thing, this is a pattern that’s prime time right now during summer, but as McComas said, “targets a certain population of fish that will be in the cabbage all year-round, which are usually your better fish in the lake.”