Mourning Dove: A Game Bird that was ‘Born to be Eaten’

Mourning Dove: A Game Bird that was ‘Born to be Eaten’

The international symbol of peace just happens to be one of America’s most abundant game birds. Fish and Wildlife Service data estimates that over the past 2 years, hunters harvested nearly 10 million mourning doves in the eastern United States alone. In spite of those harvest numbers, these bird populations remain resilient, mostly because of their prolific reproduction methods. They’re basically flying rabbits.

While commonly producing only a pair of eggs for each nest, a mating pair will produce up to five broods of young annually, nesting from March until November. Eggs take just 2 weeks of incubation to hatch. Once they hatch, their parents work together to feed their offspring “crop milk.” (Doves have an enlarged esophagus, known as a “crop,” which allows them to hoard additional seed for digesting later) The lining of the crop produces a secretion that is rich in protein and fat; it resembles cottage cheese. The young are quickly weaned within a few days, and begin eating seeds themselves, becoming fledged within a few weeks.

“Their ecological role is to be prey,” said Phillip Dickerson, a biologist for the Texas Parks and Wildlife Department. “They are born to be eaten, and humans are just one of their predators. Hunting has not caused any decline in the various dove species.” Dickerson adds that some gradual historical declines are the result of large scale changes in existing habitat, and loss of habitat due to agriculture and human developments.

Dickerson also told the Sibley Nature Center that Eurasian collared doves might be competing with the mourning doves for resources. While checking traps, he noticed that the two species seem to utilize different feeding times to utilize the bait as an artificial food source. “I have not witnessed any physical battles between the species here, but folks have told me they have seen whitewings chase mourning doves away from food at backyard feeding stations. With the increase in Eurasians, maybe the mourning doves’ access to food and water is being limited.”

From Field to Plate

Either way, they are both tasty species, and although dove hunting and harvest has actually been on a historical decline, the tradition of these hunts as community gatherings and a wild game food resource remains alive. Fields are planted with seed-rich plants such as sorghum and millet, and the hunts are meticulously scheduled and arranged to place hunters where even missed shots will send the doves flying in a circle to the next hunter. Being small morsels, it takes a few birds to make a meal, and a little work to prepare them for the kitchen.

From Field to Plate wild game chef Jeremiah Doughty recommends bleeding out your birds in the field to remove the “gamey” taste from the meat. Removing the head quickly after the bird is taken down will drain the blood from the chest cavity, producing a visible difference in the breast that will also leave a recognizable change in the flavor of the table fare. Doughty also says that over-cooking the meat dries it out, adding to the gamey flavor.

Breasting out the birds and making dove poppers are the most common and popular way of cooking them. The breast is placed on top of a halved and de-seeded jalapeno pepper with cream cheese, then wrapped in bacon and placed on the grill. Don’t get me wrong, dove poppers are a delicious way to eat these birds, but Doughty prefers to think outside the box when it comes to culinary creativity. 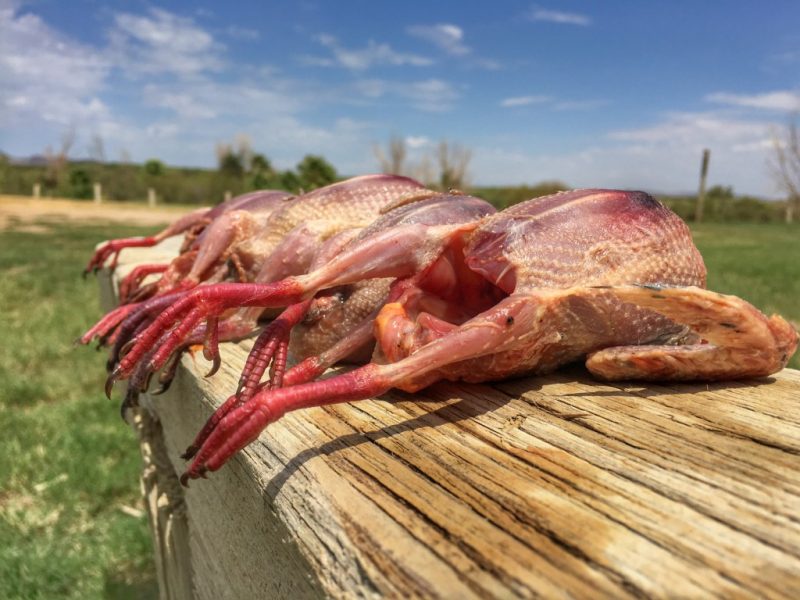 While it seems tedious and messy, plucking (pic above) makes the juice worth the squeeze. You can cook the birds whole, place them in a crockpot until the meat falls off the bone, or cut the meat free from the bones and then grind it, using the remaining meat and bone to create a broth. Either way, utilizing the full extent of the meat from each bird will allow you to branch out and try some new dishes.

“5 (dove) Recipes to Impress Your Friends and Family that don’t Include Bacon” is an excellent how-to guide for preparing your doves From Field to Plate. If you’re still hellbent upon your love for the traditional dove popper, I also highly recommend checking out Doughty’s recipe for “Dove Popper Meatball Subs.”

While emphasizing the importance of maintaining hunting traditions and the community “dove shoot,” it’s worth the effort to branch out sometimes, remembering that this wild food resource is as versatile as it is abundant.