1. A Long-Range Shot is anything after about 300 yards, depending on caliber.

Most modern rifle cartridges perform predictably out to 300 yards, give or take. At these shorter ranges, the bullet isn’t in flight long enough for gravity to have a major influence, so you can aim where you want the bullet to impact.

2. You must match the right equipment with ballistic science.

What’s really different is the importance of matching equipment like scopes, turrets and reticles with ballistic science.

3. Use ballistic charts and calculators to compensate for forgotten factors.

Gravity and the wind are the biggest variables, but other things come into play at longer ranges, too.

For example, the Coriolis Effect makes bullets drop or rise depending on whether you are shooting toward the east or west because of the rotation of the earth. It’s not significant until you’re shooting 1,000 yards or more, but it’s real.

Fortunately, by using ballistic charts and calculators, shooters can predict the influence of these factors. As long as they estimate wind speed and direction accurately along the flight path, long-range hits are obtainable.

Gravity is a big deal, but thankfully it’s also easy to predict.

Gravity always wins, so the speed of a bullet doesn’t make it any less subject to the laws of physics. That said, a faster bullet gets to a target in less time, so it’s not subjected to gravity as long as a slower bullet. That’s why faster bullets appear to “defy gravity” more than slower ones.

Tactical turrets are great when time is available. When quick shots are required, graduated reticles fit the bill. Reticles such as the SCR Mil reticle have fine graduations calibrated using milliradians.

The longer a bullet is in flight, the more it can be moved by the wind.

The most important piece of gear is an accurate rifle chambered in a caliber suitable for long range. Calibers with small and light bullets, such as 223 Remington, are great for up to 500 yards or so, but those light bullets don’t do so well at 1,000 yards.

There are dozens of great calibers good for long-range shooting, and you’ll find many of them are in the 6mm, 6.5mm, 7mm, and .30 caliber range.

With enough bullet mass and case capacity to generate velocity, they have the basic elements needed for predictable long-range performance.

Shooters often talk about flat-shooting high-velocity calibers, but whether a bullet “shoots flat” or not isn’t a big deal. Gravity is constant and predictable, so whether a bullet drops 5 or 7 feet at some distance doesn’t really matter. What is much harder to predict is the impact of wind. Some calibers, such as 6.5 Creedmoor, fire streamlined and aerodynamic bullets that aren’t pushed around by the wind nearly as much. Therefore, they’re more forgiving when it comes to estimating the impact of the wind on a long shot.

The dials, known as turrets, on a scope, adjust an internal tube which moves the reticle (crosshairs) relative to the bore of the rifle. The concept is just like a quarterback looking right at the receiver, even though he lobs the football high enough in the air to reach his target down the field. 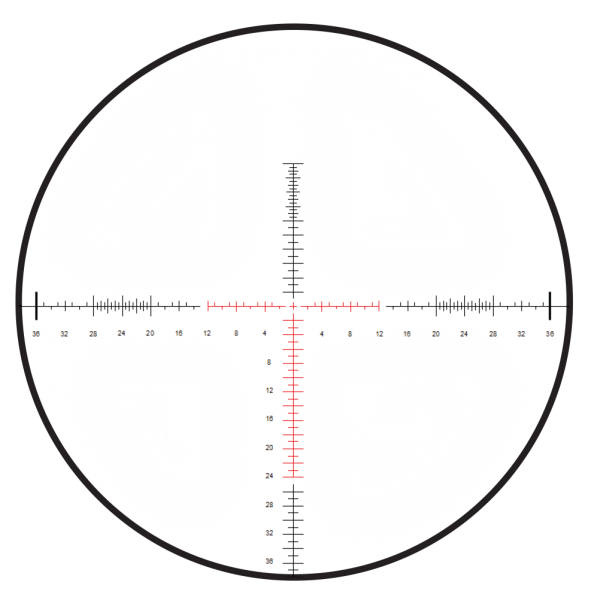 Many scopes, like the Burris XTR II model 201043 have 1/4 MOA adjustments, so a single click adjusts the bullet’s point-of-impact 1/4 inch at 100 yards; four clicks equals 1 inch at 100 yards. Understanding MOA and knowing the adjustment calibration of your scope dial allows you to get on target quickly.

Some militaries use different milliradian scales. The U.S. Army says there are 6,400 mils in a circle, while the Russians use a figure of 6,000. Just because.

Some scopes, like most of the Burris XTR II scope models, use .1 milliradian click adjustments on the turrets. Each click will move bullet impact .36 inches at a range of 100 yards.

12. A Good Scope and Reticle Will Help You Estimate Range

One of the original reasons for the invention of the milliradian system was to determine the range of targets optically. Since the measurements are angular, the shooter can use the milliradian marks in the reticle to observe a distance object of known size. A simple equation provides the distance.

This is exactly why the Burris SCR Mil reticle features ranging sections calibrated by tenth mils on the vertical and horizontal crosshairs. That makes it easy to measure the milliradian size of objects precisely.

Spotters play an important role in long-range shooting. They can observe variables like wind and target movement while the shooter is focusing on setting up the shot. Spotters are also able to track the results of the shot by watching impact or even the “trace” in the air created by disturbance of the bullet’s forward motion and rotation through a high-quality spotting scope. If their spotting scope uses a matching setup to the riflescope, they can call out specific adjustments to the shooter. For example, the Burris Signature HD Spotting Scope has an optional eyepiece with the SCR Mil reticle. That allows the spotter to make corrective calls like “adjust 1.1 mils up, and .6 left.”

Many local clubs are investing in longer rifle ranges, so be sure to check those in your area. Because of the knowledge required to shoot safely at long range, you might need to become a member or even pass a certification to make sure you know how to keep all fired rounds within the confines of the backstop.

Taking a class is a great idea. If your local club doesn’t have any available, consider visiting Gunsite Academy or the NRA Outdoors Long-Range Shooting School Course. Here, you’ll learn a wide range of long-range skills including correct shooting form, ballistics, minute-of-angle and milliradian calibration, and wind and range estimation.

This infographic was produced in cooperation with Burris Optics.