Dogs and Deer: The Rise of Blood Tracking

Dogs and Deer: The Rise of Blood Tracking

An eagerness to please is a trait that has made a dog man’s best friend, but its nose is the thing that makes a canine a great ally to the hunter. Those two in combination have created a bond between man and dog for hunting everything from birds to bears. The incredible explosion in the use of dogs for blood tracking deer is just one more way the dog has endeared itself to hunters.

Jeremy Moore (below) of Pulaski, Wisconsin, was an early adopter, and he now owns a business that trains dogs for blood tracking and shed hunting, along with providing supplies for training (www.dogbonehunter.com). He’s watched the growth and seen the increase in credibility of using dogs to recover deer that can’t be found by the hunter. He’s a strong proponent of using dogs to recover deer. He explains how a blood-tracking dog sorts out the clues. 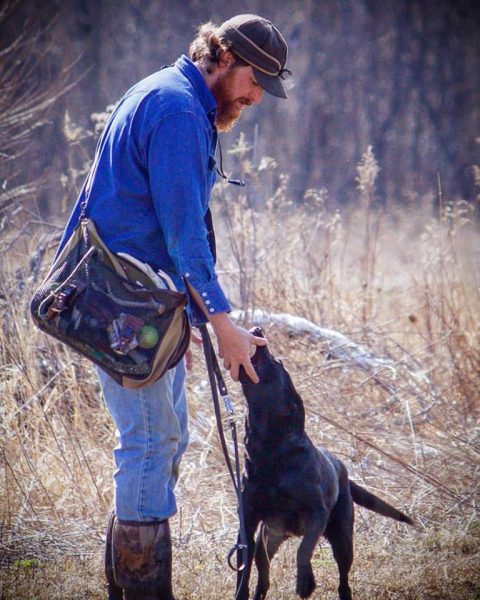 “Blood tracking dogs use a variety of scents to trail the deer, but the actual drops of blood are one of the first pieces of the puzzle,” he said. “Once you have lost the blood trail, it’s best to back right out, avoid stomping around the area and likely spreading scent and blood that you cannot see. Once you put the dog on the end of a blood trail, it can easily smell drops of blood and will take up the trail.

“The dog adds pieces of the puzzle as it goes along. Each deer has a signature smell, so the dog is building a profile of sorts of the deer’s individual smells. If the blood trail stops altogether, or the deer goes into an area with lots of sign — say a bedding area, for example — the dog can then stay on the scent of that individual deer until it comes across the animal.”

He says a dog owner can learn to read a dog quite easily. Each dog gives off clues as it trails that helps the owner to determine when the dog is on the track. Some might be the cadence of tail movements, a little hunch of the back, the position of its ears. Training a dog yourself helps you learn its body language, because you know where the trail is (you laid it out) and you learn how to read the dog when it is on or off the trail.

Any dog can be trained to be a blood tracker, and just about every variety is represented from the dachshund to the Labrador. In many states, laws require the tracking dog to be on a leash, but in all cases, the dogs are close. This is good because when you get close to a deer that’s been lying dead a few hours, the potential to run into coyotes grows. Smaller dogs in the woods often fall prey to coyotes, but since a handler is nearby, this is rare in blood tracking.

Dogs track the best in wet weather. A light rain, or foggy, misty weather creates ideal scent-tracking conditions. The smells are magnified to the dog. According to Jeremy, it takes a pretty heavy shower to obliterate a blood trail. He’d rather track a deer in a rain than during dry, dusty weather. For that reason, it’s best to wait until there is dew on the ground to track. That might be during the night, or it might be better to put the dog on the trail first thing in the morning.

What if the dog comes across the deer and it hasn’t expired? The dog and owner can search the area for clues, then back out for a few more hours before taking up the trail again. Jeremy says the dog will find the deer’s bed and there can often be great clues to the condition of the deer by examining the bed. When the deer dies, the dog will find it. It’s rare for a well-trained dog to come up empty if the shot was fatal.

If you have a deer you can’t find, a call to a blood tracker will often put that deer in the back of your truck when all else fails. The website www.unitedbloodtrackers.org has loads of information and a database of contact information for blood trackers in your area. It also has a map of the states that allow blood tracking and those that do not.

Surprisingly, blood tracking of deer is somewhat controversial and not legal in all states. Many people have a negative view of dogs running deer, and they’re confused by the actual methods used by blood trackers. The website of the United Blood Trackers has a map of the states where it’s legal, and resources for those who would like to press for making it legal in states where it’s currently not allowed.

When you call a blood tracker to bring out a dog, you’ll be asked a lot of questions about the shot, the trail and how you handled the situation before you made the call. They’re gauging the potential of finding the deer, and determining their odds of finding it based on an educated guess.

You should ask questions as well, and one of the main ones is how they are compensated. Each of the persons doing this are hobbyists; there is no standard fee. Some will charge you to come out and look, some will charge you if they find your deer, and some will ask you to pay for both. Others will do it for nothing because they love working their dogs and helping people out, but won’t turn down some gas money. Ask ahead of time so you aren’t surprised when standing over your deer and facing an open palm.

No matter what game a dog is pursuing, there’s a pleasure in watching a good dog do its job well. Blood tracking is one more way man’s best friend can benefit the hunter and recover an animal that might otherwise go to waste.