“Canadian Whitetail” posted these trailcam pictures, and they are garnering a lot of attention.

The beautiful thing about trail cameras is they catch everything you want/need to see in the woods all season long.

With that being said, trail cams also capture more gruesome scenes sometimes. It’s nothing any hunter ever wants to see, but it is eye opening, and gives you a behind-the-scenes look at how tough Mother Nature is.

Take a look at this amazing series of photos taken on a StealthCam, which shows a mature Canadian whitetail being hunted by a pack of hungry coyotes: 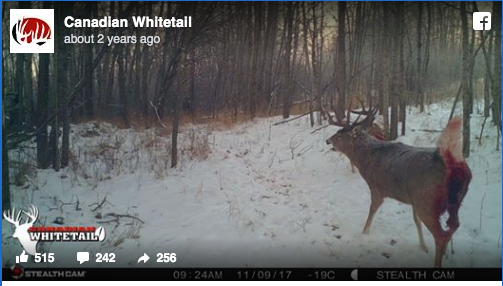 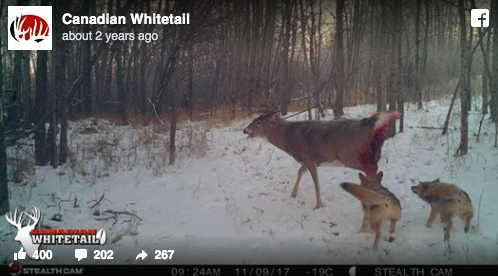 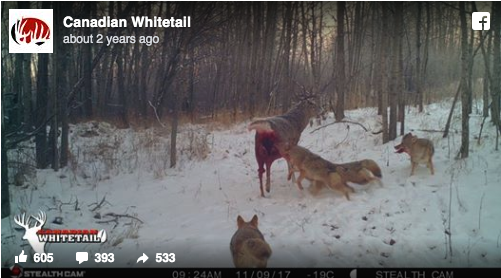 The post also included photos of the buck from late-summer when he was still cruising around in velvet, and then a hard antlered pic, followed by the bloody winter scene:

“This graphic series of photo’s show a buck being killed by multiple coyotes. Justin has several years history with this deer and had called him “Browser”. The buck has also been featured on the show in the past and it is actually a deer that we had filmed while hunting in Alberta just this September. Dead is dead, and this is just nature doing its thing, but this is much more tragic for the deer than the quick zip of an arrow or bullet. Something to show the next person you run into who thinks the forest is just a bunch of fuzzy animals all frolicking around together as friends having tea parties and that feels that hunting is wrong…

It’s hard to imagine that the coyotes can bring down a big mature buck like this in the prime of his life, but we see it all the time. Just think, if they can do this, what chance does a fawn have? Unfortunately we will not see what potential Browser had.

Predator control is one of the best methods of deer management, we shoot coyotes all year round, and trap through the winter. I believe it saves alot of deer.”