Waters in the continental United States that offer ice anglers a genuine shot at truly huge predator fish are few and far between; but make a quick skip across the border into Manitoba and the opportunities to target hulking walleyes, massive pike or titanic lake trout are seemingly limitless. Anglers need only take their pick.

Winnipeg — the gateway to the province’s boundless wilderness and bountiful lakes and rivers — is easy to reach. Drive time from Minneapolis, Minnesota, is just 7 hours, or anglers can get there in roughly 90 minutes by air. Add an hour flight time nonstop from Chicago. From here, the adventure can go anywhere you wish.

For example, if your bucket-list item, “Ice a 12-plus walleye,” remains unchecked, head to Manitoba and world-famous Lake Winnipeg. There’s simply no other place where you’re more likely to realize that dream.

From the middle of December through March, Lake Winnipeg gives up more 12- to 15-pound walleyes than any other body of water on the planet. These greenbacks, as they’re called due to their beautiful emerald hue resulting from the lake’s limestone substrate, grow to incredible size because the water body is so huge, more than 9,000 square miles of surface area. And since it drains a landmass that’s about the size of a small country, the water is highly fertile, which means it can support vast populations of the forage fish upon which walleyes grow fat. With an average depth of less than 40 feet, Lake Winnipeg is also very shallow for its size, yet another hallmark of prime walleye water. 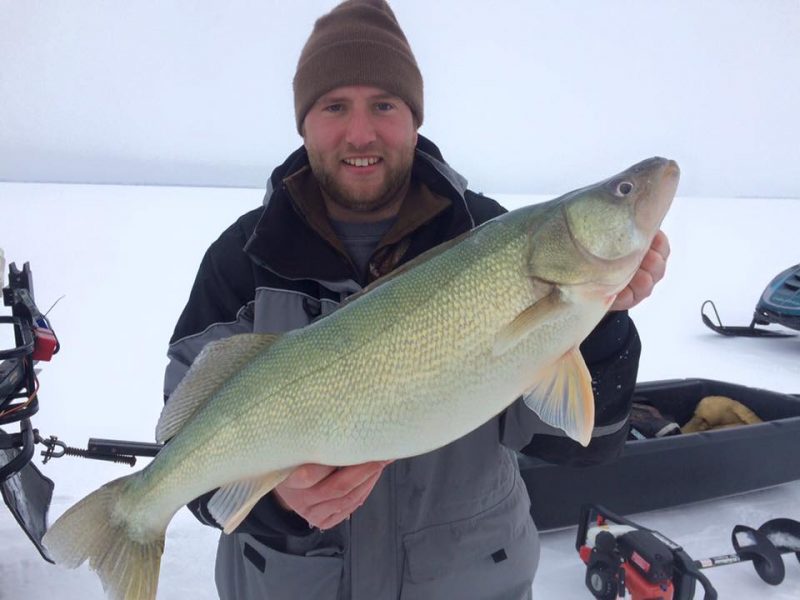 Most of the ice fishing takes place at the lake’s southern end on a small percentage of its total surface. Still, the fishing area is immense and the bottom is nearly featureless, stretching for miles without a significant change in depth. In other words, it’s the ultimate scenario for fish that rarely stay in one place for any length of time. 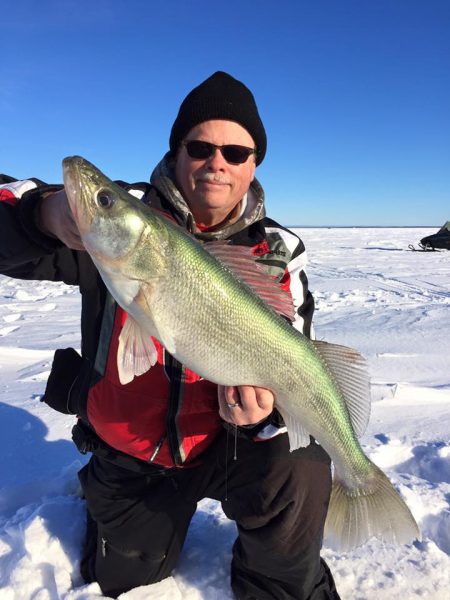 Anglers new to Lake Winnipeg are smart to hire a reliable guide who has an understanding of where the fish have been located recently, and where they’ll likely be found tomorrow. Donovan Pearase (below) of Blackwater Cats-Ice Eyes Guide Service is among those pros who spends nearly every waking hour tracking winter walleyes on the lake so clients don’t have to burn their weekend, or whole vacation, looking for fish. 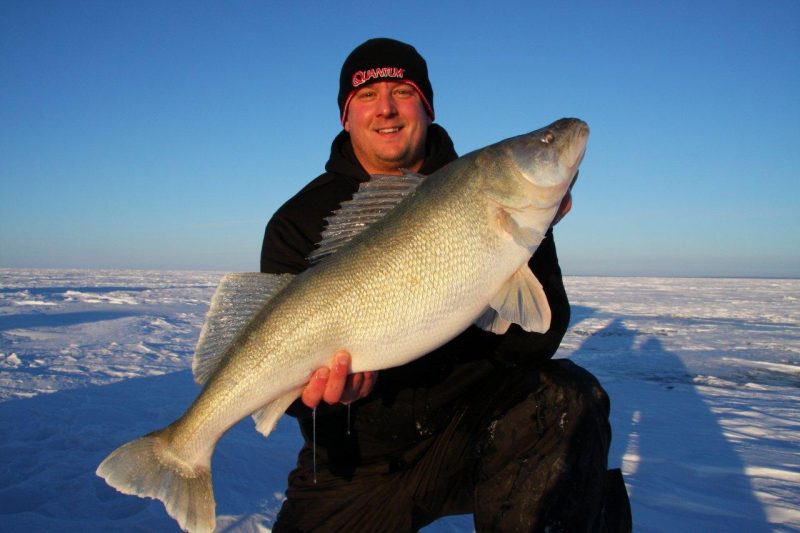 For a little cash outlay, anglers can have all tackle, equipment, shelters etc. provided for a day on the ice, or they can bring their own gear. Either way, it’s a solid strategy for getting on roaming greenbacks quickly.

While Lake Winnipeg is known for its greenback walleyes, Manitoba also offers traditional golden-colored walleyes, too. The province is dotted with literally thousands of lakes containing these fun-to-catch — and delicious — fish, but if you want to land a trophy golden walleye, then check out Wekusko Falls Lodge. 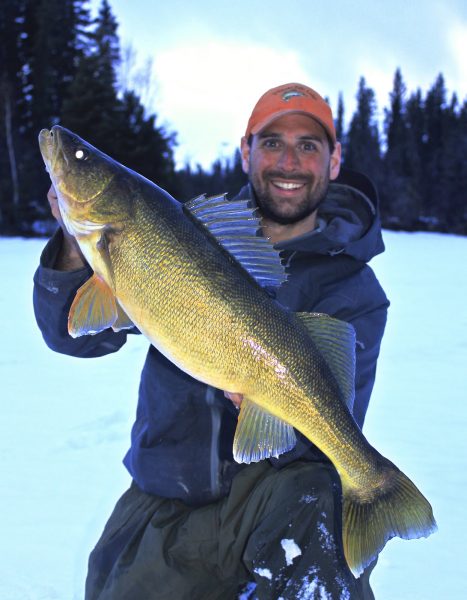 Located 425 miles north of Winnipeg on Provincial Road No. 392, Wekusko Falls Lodge sits on the banks of the Grass River, adjacent to Wekusko Falls Provincial Park. Owner Bryan Bogdan (above) and his wife Elissa bought the lodge in 2010, and since then he’s been marking his GPS during the open-water season to pinpoint likely hotspots on Wekusko Lake for ice anglers.

“During most winters, our good ice doesn’t really get going until early December,” he said. “Of course, every year is different, and safety is always priority No. 1. Safe ice often stays on Wekusko until the third week of April.” 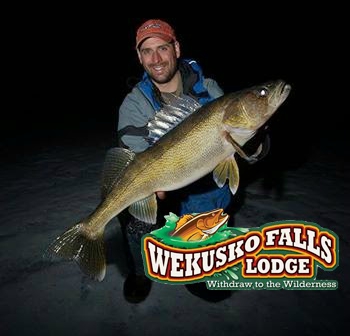 Bogdan has several lakes in the area that are loaded with walleyes, as well as pike, lakers, rainbow trout and eelpout (burbot), but it’s the walleyes — the golden walleyes — that are often at the top of his ice fishing clients’ wish lists. And while some of the smaller area lakes produce good numbers of ‘eyes with the occasional big fish, Wekusko Lake, which measures approximately 15 miles long by 5 miles wide, is the top destination for trophies.

“We have several groups come up and stay at the lodge in March and April,” Bogdan said. “Every group heads for home very happy, having had some excellent days of ice fishing. If you want to try something different this year, and possible land your biggest walleye ever, think about coming up in late-winter to catch one of the monarchs right below you.”

This is not a misprint: Groups led by Bogdan and his knowledgeable guides have experienced some incredible hard-water bites. During a recent March outing, a group landed 36 walleyes in 90 minutes in one spot; eight of those fish measured over 26 inches, with one 28-incher. Wekusko kicks out numbers of 30-inch walleyes during the open-water season, and several anglers have netted golden giants measuring 32 and 33 inches. Think about how a walleye that size would look coming up through the hole!

Anglers across the U.S. ice belt spend days tending tip-ups, hovering over quick-strike rigs or jigging flashy metal, all in hopes of connecting with a trophy-class northern pike. In the course of a season, however, they may ice one, or maybe a few, big predators among the dozens of hammer-handles that hit their baits.

Winter fishermen who absolutely live for the thrill of battling a pike that makes them worry whether the hole in the ice is actually large enough should do one thing — go to where giant fish swim by the thousands. Manitoba is such a place. 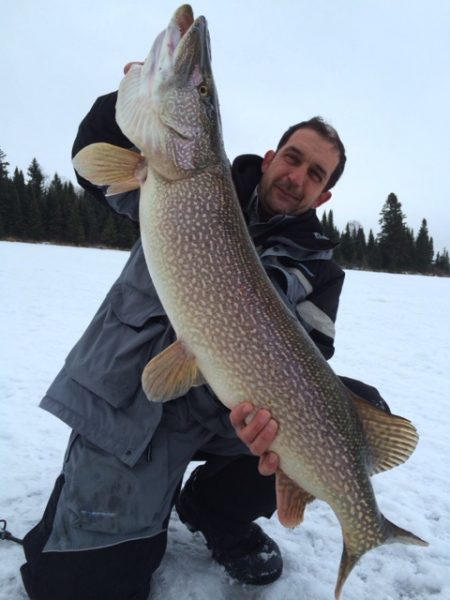 Manitoba’s Master Angler Program record book is littered with pike that measured over the minimum qualifying length of 41 inches. And due to a strong catch-and-release ethic and mandated use of barbless hooks, that outstanding level of success is sure to continue for a long time to come.

When talking giant pike through the ice, the Winnipeg River and Trail End Camp & Outfitters is a stand-out destination. An easy 2-hour drive from Winnipeg on hard-topped roads puts anglers on the beautiful upper reaches of the river. Once there, it seems as remote and isolated as any fly-in camp. 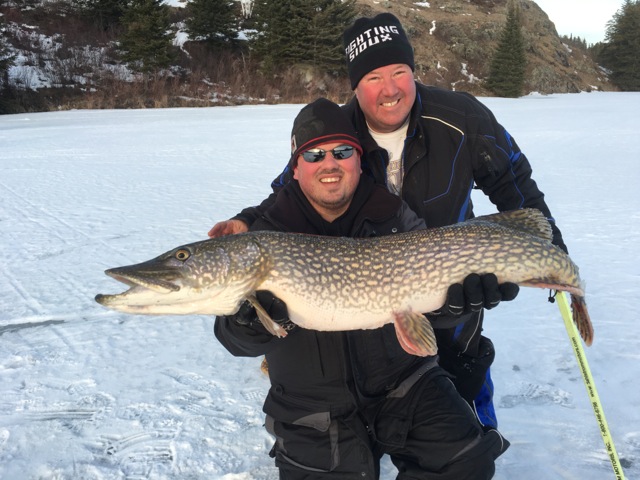 Late February through March is prime time for monster ice pike, and camp operator Vance Hrechkosy schedules fishing packages to coincide. “Our efforts target the large northern pike that cruise the mouths of the bays looking for an easy meal,” he explained.

Two-day (three night), or one-and-a-half-day (two night) fishing packages are available for groups of four to eight anglers, and include accommodations, guided transportation on the ice via track machine and custom trailer, tackle, bait and lunch. For day-trippers, he offers packages that includes transportation, gear and snacks.

Lake trout fishing through the ice is an adventure anywhere, but when a DIY approach is combined with the chance to ice a fish of a lifetime, it makes the experience even more memorable. 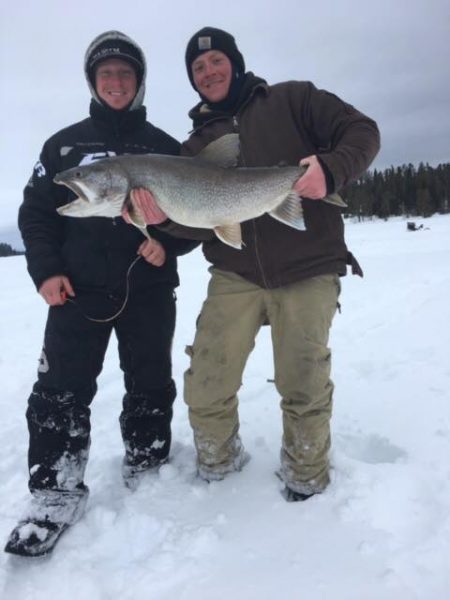 In the last few years, however, more and more lodge and camp operators in Manitoba and across Canada have discovered that catering to winter anglers is a profitable proposition as well.

Winter anglers who visit Kenanow Lodge bring their own tackle, electronics, gear and snow machines to the lake and make day trips onto the ice from the lodge. Accommodations are in the form of a bunkhouse that has seven two-bed rooms, two communal bathrooms and a sitting/TV room. And the cost is less than what you’d expect to pay for a night at an average chain motel. Groups can arrange to have meals prepared for a negotiated price, or anglers can choose to cook for themselves.

Look for lake trout in the typical spots. Deep structure that steps down into deeper water is a prime area for numbers of fish. Deep-water troughs between basins are another solid option. And while a large white tube lure is a still a go-to, many anglers are finding that smaller baits —flutter spoons, jigs and ripping shad lures sized more for walleyes — are as, if not more, effective than the typical lake trout fare.

The exception here is a dead-bait rig on a second line. Rig a large (10 or 12 inches isn’t too big) cisco on a quick-strike set-up under a tip-up or on a set line, and let it fish while you actively search and jig with a hand-held rod. 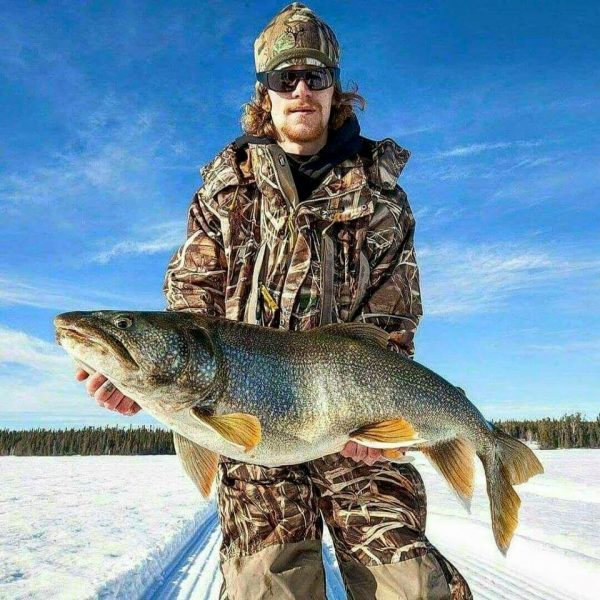 Some anglers also spend more time fishing shallow water than they do probing the depths — portions of points or shelves that are in 35 to sometimes less than 20 feet of water. Bites usually come less frequently, but the fish that do bite tend to be bigger.

Ice fishing local waters might be easy, convenient and fun. But when that itch to catch a walleye, pike or lake trout that dwarfs anything you can find around home, there’s just one thing to do: Head to Manitoba!