An angler, even a dedicated pike fisherman, could spend a lifetime on U.S. waters without connecting with a true trophy-class fish — one of those gape-jawed, 20-plus pounders that can down a duckling as easily as you swallow an aspirin. The reason is simple: There are few lake systems in the Lower 48 that have the habitat and forage base required to grow gargantuan ’gators in appreciable numbers.

For a nearly guaranteed opportunity to feel the raw power of a giant pike on the end of the line, you need only to travel north — specifically, north to Saskatchewan, Canada — where the cool waters, an abundance of forage, and limited fishing pressure at remote, fly-in destinations allow brutes like these to thrive. 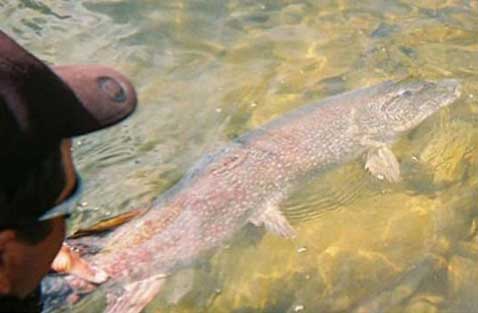 The provincial record, 10 years old now, is a 55.5-inch, 47.5-pound monster. Certainly, topping that mark would take some skill and a bucketful of luck, but we’re not talking about setting a new record. We’re talking about pursuing a life altering experience like the one OutdoorHub writer Kurt Beckstrom had on Reindeer Lake where he caught seven fish topping 20 pounds in less than 25 minutes! All seven giants ate a half-ounce, nickel/florescent yellow Pixee Spoon from the same boat position.

There were dozens of other big pike during his 3 days of fishing, including one he says might have ticked the 30-pound mark had it not come unpinned at boatside. But that epic half-hour of nonstop action was definitely the trip’s highlight, and so far, a Top 10 life event. 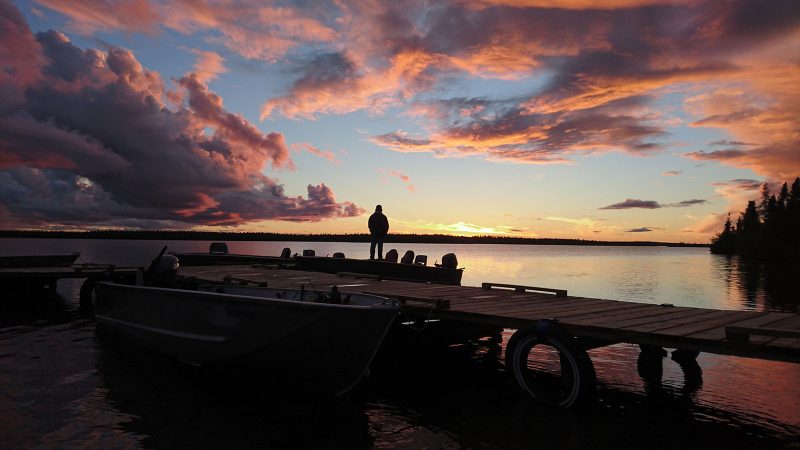 The number of lakes in Saskatchewan rounds off at about six figures, and it’s safe to say that a majority of them hold huge northern pike. So, choosing a particular spot for a dream trip can be daunting. Any one of the “Hot Half-Dozen” destinations that follow is certain to fulfill the wildest pike fishing fantasy. But to cover all the bases, be sure to visit Tourism Saskatchewan’s website where you can get the scoop on dozens and dozens of outfitters and the types of angling in which they specialize.

Saskatchewan’s second largest lake, Reindeer is about 180 miles long and 2,200 square miles in area. It lies along the province’s eastern border and spills into Manitoba at its northern end. 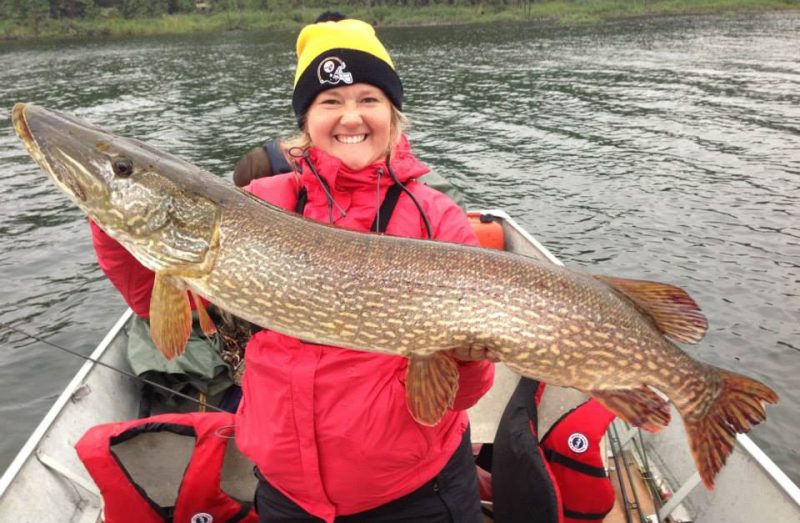 Pike can grow big here because of the endless habitat the lake offers — deep and shallow structure, lush weedbeds, and countless islands, bays and coves. Forage fish, in the form of walleyes, yellow perch, Arctic grayling, whitefish and suckers, are present in abundance, and keep the lake’s pike population well fed and healthy. 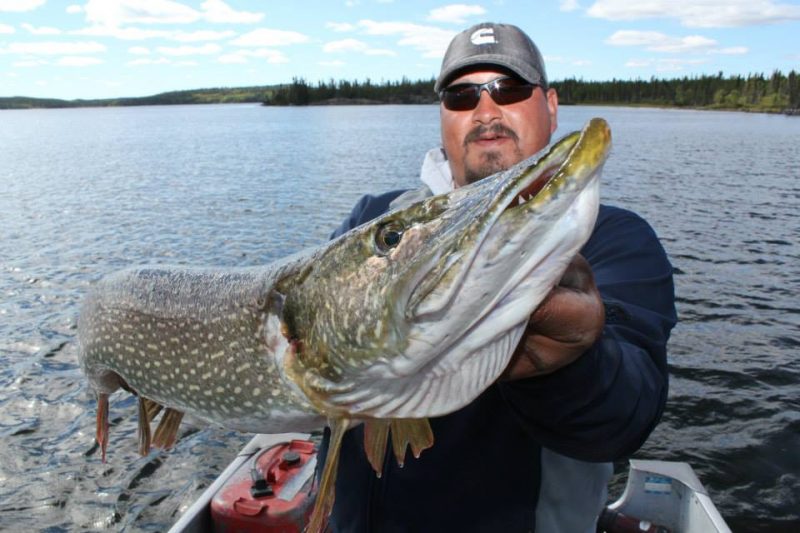 Likewise, outfitters such as Lawrence Bay Lodge maintain a catch-and-release policy for trophy-class fish to help ensure the success of future anglers, which explains why 75 percent of their clients caught at least one fish between 18 and 35 pounds last season.

The combination of outstanding living conditions, a bountiful food supply and strong conservation ethic means that the action is good all summer long. But we suggest timing your trip post ice-out in June. That’s when pike lollygag in the shallows, seeking the warmest water available. Depending on water temps and the time of day, the fish might be on fire, or you may have to coax them a bit. But they’ll be there.

Any discussion regarding huge northern pike must include Wollaston Lake, tucked between Reindeer Lake and Lake Athabasca in Saskatchewan’s northeast corner. The 1,000 square-mile body of water is unique in that it drains into both Reindeer, which ultimately empties into Hudson Bay, and Athabasca, the outflow of which eventually ends up in the Arctic Ocean. 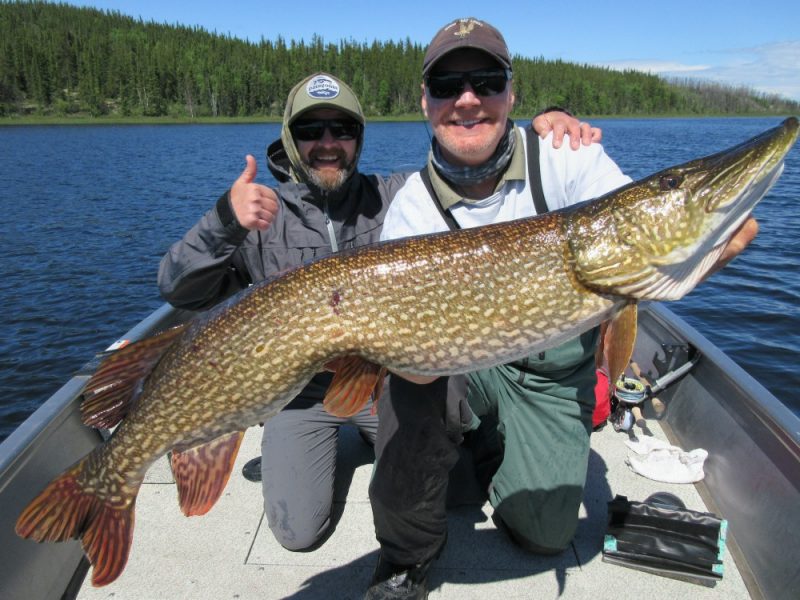 More important to anglers, though, is its reputation for churning out numbers of fish that approach 50 inches season after season. Minor Bay Lodge is the hub of all this fishing action. 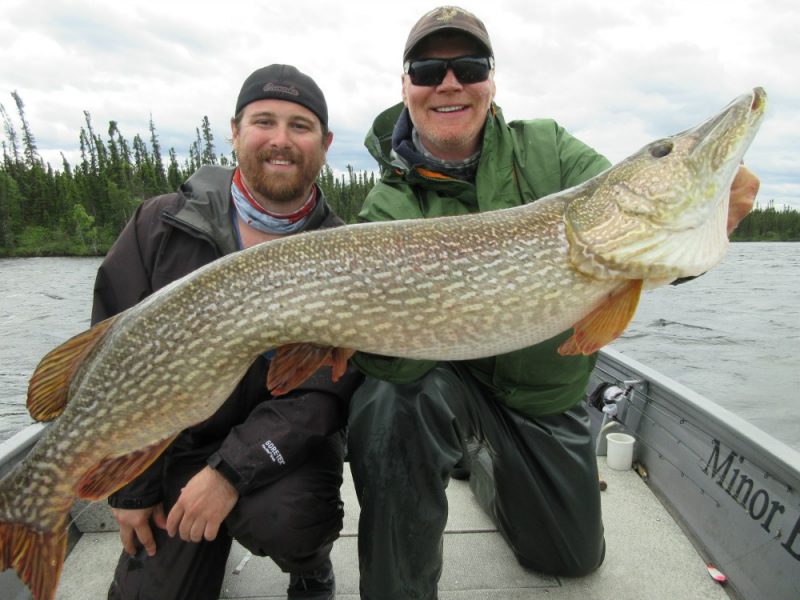 Strategically located on a sheltered bay on the southwest shoreline, the lodge is in the heart of pike territory, where marshy bays, points, rock bars and lots of shallow, weedy bays provide everything the fish need to grow to trophy proportions. For anglers, it means prime fishing spots are just minutes away from the dock.

Countless bays and coves along the shoreline provide the perfect habitat for northern pike, especially in June and July. Forty inchers are common, and a fish close to 50 is a real possibility. 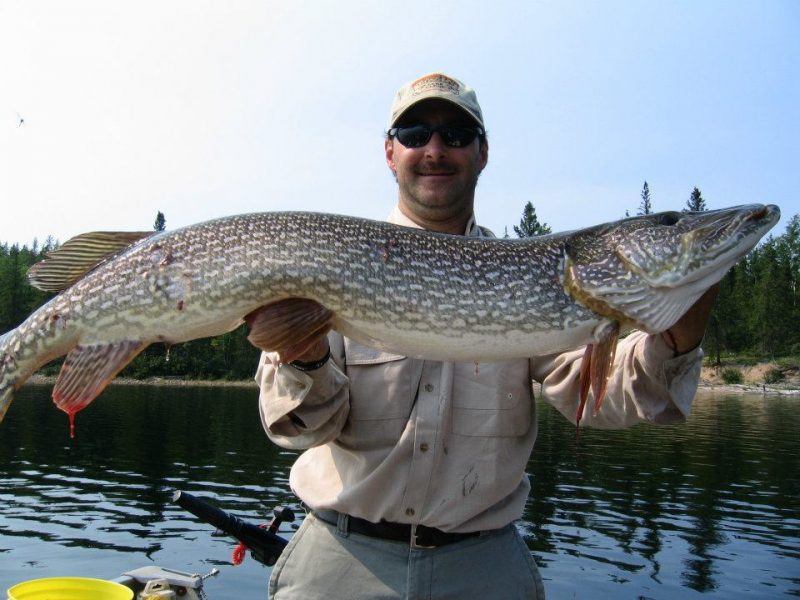 At day’s end, anglers can relax and unwind in comfort and luxury over cocktails and appetizers at Tazin Lake Lodge’s main building before sitting down to a five-star meal. Among other amenities, the lodge offers a full-service dining room and bar, full-time chefs, and daily housekeeping service in the quiet and comfortable cabins. 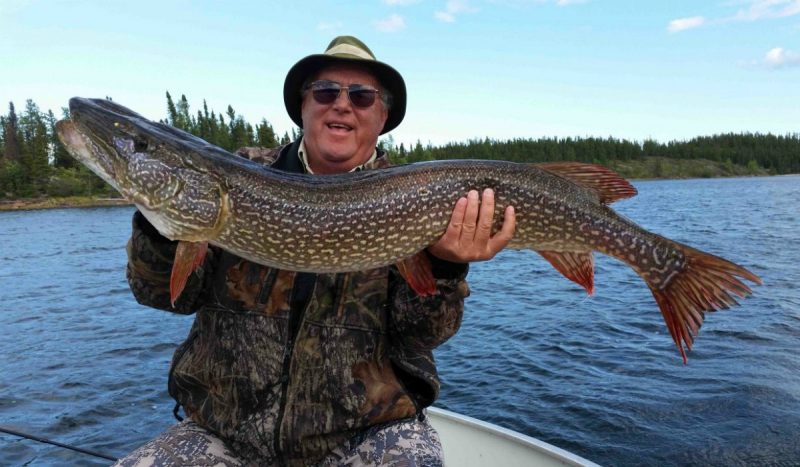 This lake is so far north that you wouldn’t have to travel much farther to leave Saskatchewan altogether. Furthermore, it’s relatively small size (about 26 miles in length), and the fact that it’s surrounded by thousands of similar bodies of water, make it very difficult to locate on a map. Thank Heavens for Google! 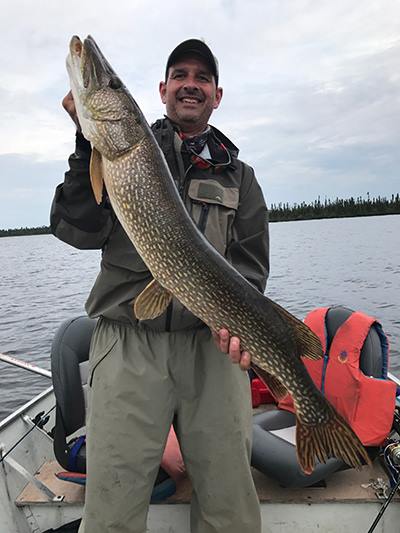 Anglers who come to Misaw Lake Lodge experience a steady stream of pike that stretch the tape anywhere from the high 30s to the mid 40s, and have a real chance at hooking a 50. From June into July, expect to find fish in shallow water where sightfishing is the name of the game. From mid-July through August, the action moves to the lake’s lush cabbage beds. 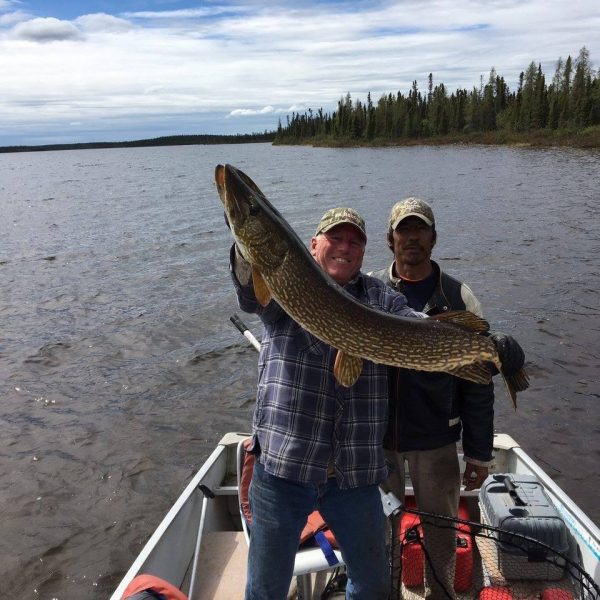 If your sights are firmly set on the pike of a lifetime, however, come in September, according to lodge owner Sam Fett. That’s when the huge females return to the shallows for a pre-winter feast.

This area is a bit of a sleeper spot. It might not make too many short lists, but we like it because it provides such consistent action with 40-inch class pike, and a solid opportunity to catch one that approaches 50. 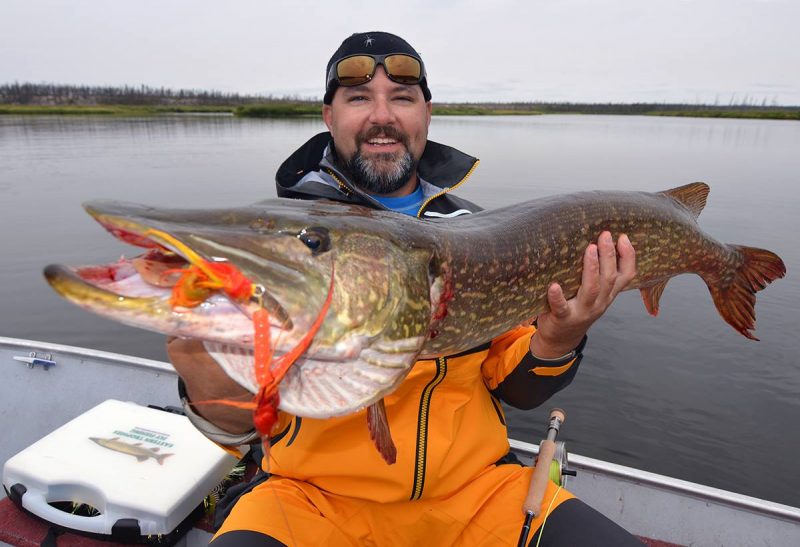 Anglers fish both the Cree River and adjacent Wapata Lake, and because Cree River Lodge, which hosts just 20 anglers at a time, is the only outfitter in the area, fishing pressure is negligible. 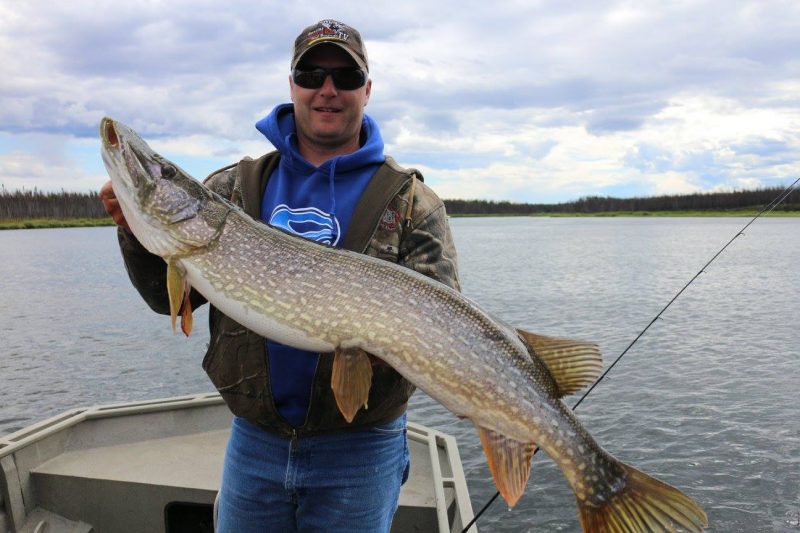 Spoons, bucktails, minnowbaits, soft plastics and the usual pike fare work like a charm on these fish. But an additional reason this area makes the “Hot Half-Dozen” is that it’s the perfect place for fishermen who prefer to launch kitten-size bundles of fluff on fly gear. Many outfitters across Saskatchewan cater to fly fishermen, for sure, but it’s the sheer numbers of pike here that make this area so special. While fly fishing the river, Field & Stream’s Joe Cermele remarked, “There are so many fish here, it’s impossible to make a bad cast in any direction.”

Lake Athabasca is officially listed as Canada’s eighth largest lake. Four of the five Great Lakes, however, are also on the list, so it really comes in at No. 4 among lakes that lie entirely within the country’s boundaries.

While most of the angling press the lake gets stems from its reputation as a must-fish destination for trophy-class lake trout, it also offers some of the best pike fishing in the country. In fact, it held the provincial record for pike for more than 50 years until it was eclipsed in 2008. 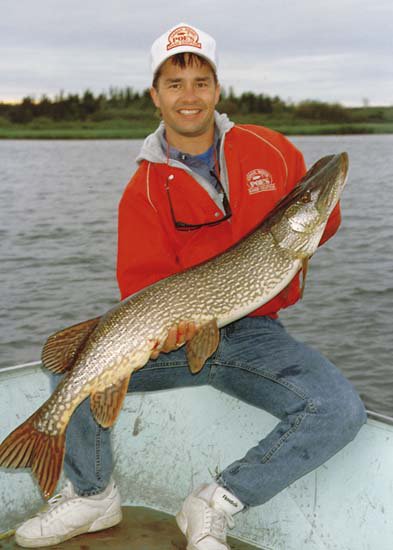 Blackmur’s Athabasca Fishing Lodges has been in operation for more than 40 years and is at the center of the lake’s trophy fishing scene. The outfitter reports that guests have caught numbers of fish that topped 50 inches in recent years. So, if you’re looking to catch the pike of a lifetime on a legendary body of water, this is the place to go.

So, there you have it, our “Hot Half-Dozen.” Now, the question is: Will you be content with shaking off a multitude of hammer-handles for another season as you search for The One on your local waters? Or, is it time pull the trigger and fly into Saskatchewan’s trophy country?

You should act fast, if it’s the latter. Outfitters are booking anglers right now, and prime times at the best spots tend to fill first. Check the websites of the operators listed here, and visit Tourism Saskatchewan for the vitals on dozens of other outfitters. Then start planning your dream trip. 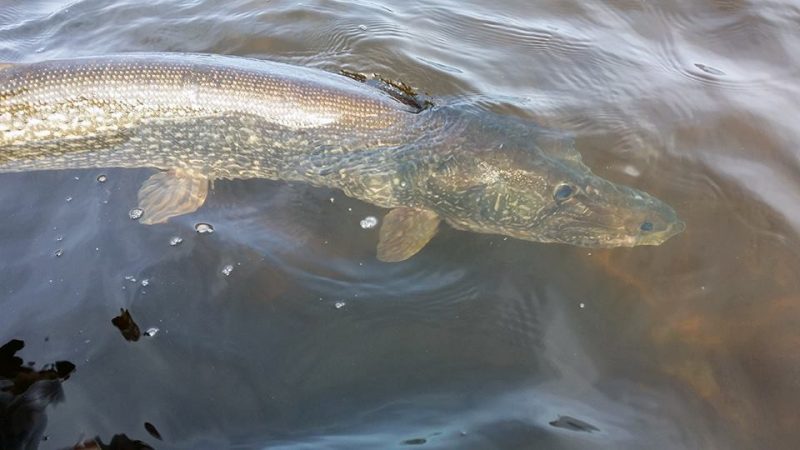