Bling from the 2018 SHOT Show: Why Cool Hats Matter

Bling from the 2018 SHOT Show: Why Cool Hats Matter

When I return home from my annual pilgrimage to SHOT Show, my two sons (ages 13 and 15) are always quick to ask: “Did you get anything cool?”

Which is another way of saying, “Dad, did you bring us anything from SHOT?”

FYI: There’s a running joke (and not totally untrue) that the universal handshake for writers and editors is an opened hand, palm to the sky, in a “hand it over” gesture. I like to think I’m not part of this crowd, but you’d have to ask those on the manufacturer’s side of the industry fence to get an unbiased opinion.

Of course, many companies plan for gear and clothing giveaways at SHOT, and it’s simply an extension of marketing. Think about it: If company X gives away a bunch of t-shirts, and competitor Y doesn’t, then at deer camps and shooting ranges around the country in the days, weeks, months and years after SHOT, that person who received the freebie is wearing a billboard for company X.

Brand loyalty is strong, and people won’t wear a hat or shirt that promotes a product he or she doesn’t believe in 100 percent. And the promotion goes even deeper: If a stranger, tipped off by the apparel, asks a simple question about the brand, then the wearer takes on the role of brand ambassador. Make no mistake: These giveaways ultimately result in driving sales. Period. Is the ROI immediate? Certainly not, but that doesn’t mean it isn’t real.

So, how did I answer my kids’ question after SHOT Show 2018?

In the spirit of full disclosure, I came home with the following bling: a Vapor SD Jacket (ultra-packable waterproof jacket) from a media breakfast/seminar presented by Sitka Gear; a cold-weather beanie from Federal Premium (evening media event at a sports bar); a t-shirt from Springfield Armory (Industry Day at the Range); and three killer baseball hats.

Sure, I could’ve filled a second check-in bag with nothing but hats; the reason I didn’t is because I’m choosy. Like many of you, I already own dozens of hats, and I wear the same three or four over and over again, with the rest simply waiting their turn in the bullpen. Truth is, many of these hats will never get into the game, and I’ll eventually give them away to friends and relatives. (Note: I always donate a few of them to my church for the annual Knights of Columbus silent auction, and people really like them.)

As I said, the three hats I accepted during SHOT Show 2018 are outstanding. And I don’t think I’ll be giving any of them away . . . that is, unless one of my sons really pushes hard — and shovels a bunch of snow or cuts a lot of grass in trade. In alphabetical order, here are the hats, why I like them, and more importantly, why I’m proud to showcase the brand in public.

1. Bergara: In terms of cap style, I think this one is my favorite of the three. I like hats with mesh panels because I wear my hats fishing during the warm summer months almost constantly. The contrasting colors of this hat are great, and I love how the orange pops off the graphite gray background. The graphic elements are simple and balanced, and using white mesh instead of more gray makes for an attractive combo; also, white doesn’t get as hot during summer. If the mesh was orange, well, that would be too much for me, and I would’ve said “no thanks” to the Bergara rep. 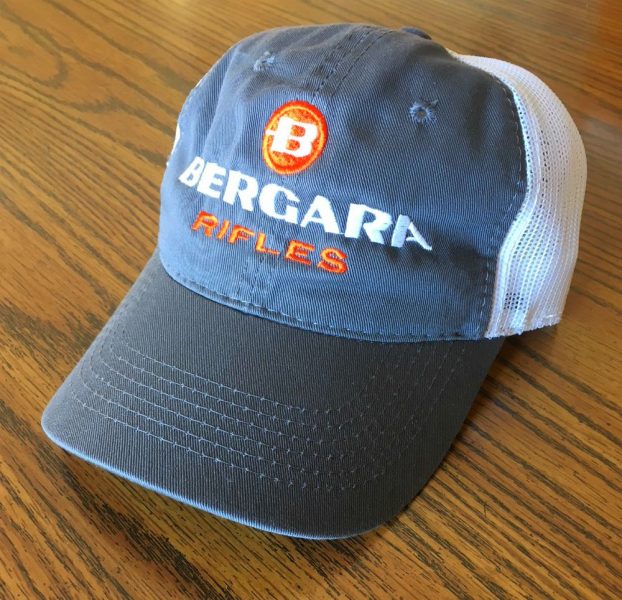 As for Bergara rifles: I don’t own one, but I’ve shot them some on the range, and they are top of the line in every way. Several of my industry friends (OHUB Predator Columnist Mark Kayser comes immediately to mind) have been running Bergara firearms for years, and he speaks very highly of the brand. Kayser told me once, “If you want a tack-driving production rifle that has many features normally found only in a custom gun, then check out Bergara.” Someday I’d love to own one.

2. Leupold: As I wrote in this article early during my SHOT Show 2018 week, I’m a lifelong fan of Leupold optics, and specifically riflescopes. I own a handful of them, and they are mounted on everything from centerfires to muzzleloaders. I don’t have any of the company’s highest priced offerings; mine are Rifleman series, as well as VX-1s. I paid full retail for all of them, long before I was an editor with connections. My dad and brother own VX-2s and VX-3s, and they love their Leupolds as much as I love mine. Leupold riflescopes provide a crystal-clear, bright view, and for the Maas family, they’ve never failed to perform perfectly. 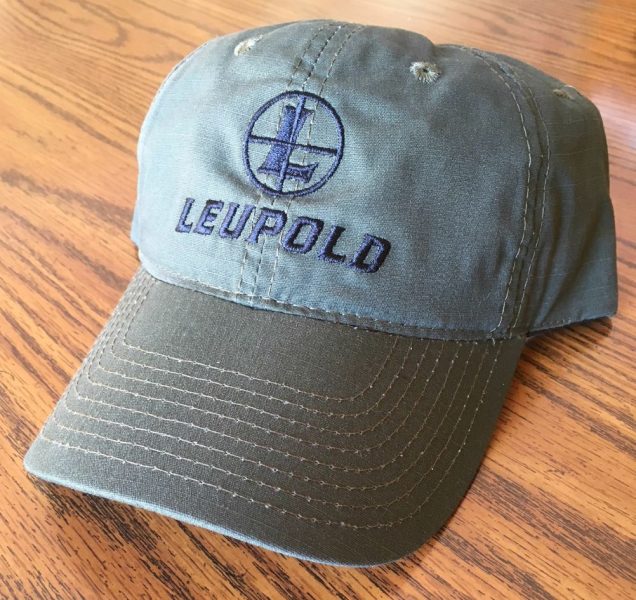 As for the hat: I’ve always been a sucker for dark-green hats, so when I spotted this one at Industry Day at the Range, I just had to add it to my collection. The black logo is understated on the background, which fits perfectly with the Leupold “we’re good, but we don’t have to shout it” company image.

3. YETI: It seems like everyone these days has a YETI hat, right? The company that once made only coolers has expanded into a lifestyle brand. In the case of this hat, I had a choice of about 10 styles and colors available, but I went with the black on black for no other reason than I don’t have anything like it. And frankly, I suspected that when I showed it to my sons, one of them was going to love it, so I’d be able to work it into a work-for-hire arrangement. (Update: They both called dibs on the hat.) 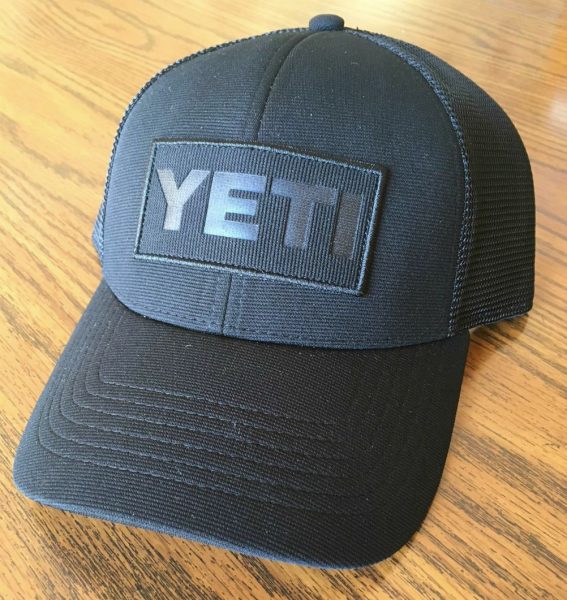 FYI: In the summer of 2016, I brought home a cool YETI hat from the annual industry-only fishing show (ICAST) in Orlando, and my oldest son somehow wrangled it away from me. As the photos below show, he wears it on the water a lot, and he’s landed some tremendous fish in the process. Everyone in the cooler business continues to chase YETI, and like all top-notch companies, they keep their lead on the competition with outstanding innovation and quality. The YETI products I’ve used are almost bulletproof. Expensive? Sure. But their gear is the best of best.

P.S. The hat I brought from home and wore during every day at SHOT Show 2018 was one I picked up last fall during a 5-day visit to Gunsite Academy in Arizona. I attended a long-range precision rifle course, and my friends will tell you that to this day I haven’t stopped talking about the trip. (Click here to read one of my articles on OutdoorHub.) If you like to shoot, you owe it to yourself to visit Gunsite.

Not surprisingly, several persons in attendance noticed and commented on my Gunsite hat. And as you can see in the pic below, it’s even more understated than the Leupold hat I discussed earlier. Nowhere does it say “Gunsite.” It features only the Gunsite raven logo on the front, and it’s green on green, so not very easy to see. That said, other people at SHOT Show who’ve had the pleasure of training at Gunsite spotted it, and conversation about the facility started immediately. Like I said in the title to this article: Cool hats matter. 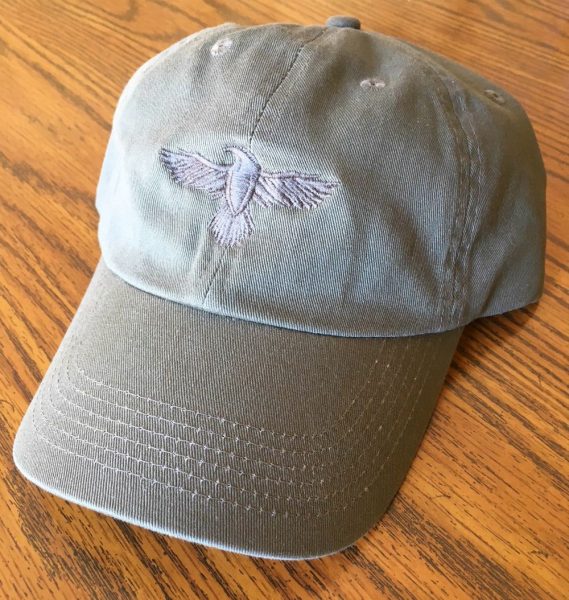