If you love to pursue whitetails, but are looking to add a little more excitement to your upcoming hunting plans, then consider planning a trip — spring or fall — to Manitoba for black bears. While spotting a big buck is exciting, it simply can’t compare to the heart-stopping thrill of watching a mature black bear suddenly appear from the shadows near your ground blind or treestand (and yes, black bears CAN climb trees).

Like many of you, I enjoy hunting just about anything, anywhere. Fall is my favorite time of the year, and I enjoy spring as well. The thunderous gobble of a wild turkey as he slowly struts into shooting range is hard to beat.

That said, I feel a bit cheated whenever a calendar year passes without the chance to hunt black bears. I won’t lie to you: The hours spent on stand without seeing a bear can be tiring, and the same is true while deer hunting. However, words can’t describe the adrenaline rush that roars through your body when a black bear — especially a big mature boar — arrives like a black ghost right in your shooting lane. No sound, no warning . . . he’s just there!

During the past 2 decades, I’ve been fortunate to pursue black bears in three provinces: Alberta, Manitoba and Quebec. While bear hunting can certainly be good in any of these places, my favorite is Manitoba. And my reasons why might appeal to you as well: 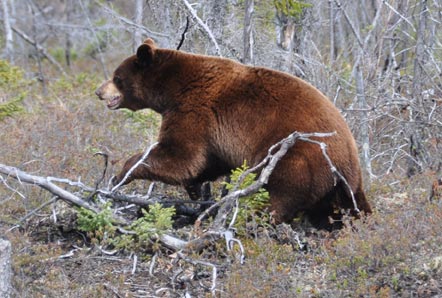 Depending on the Manitoba Game Hunting Area (GHA), black bear hunting season dates are generally April through June, then August through October. Of course, Manitoba is a large province from north to south, so don’t make the mistake of thinking that June and August will automatically be hot-weather hunts.

Assuming you’re a deer hunter, you might be a bit surprised the first time you join bear camp. To give you an idea of what to expect, I offer the following observations:

You can find hundreds of black bear outfitters by visiting the Travel Manitoba website, but to get you started in the right direction, I’ll highlight five here. I’ve personally hunted with two of the five — Big Grass Outfitters; Trail End Camp and Outfitters — and one of my good friends often books bear trips with another one of the five listed — Agassiz Outfitters.

One of my favorite hunting memories is pursuing black bears with Trail End Camp and Outfitters, located in eastern Manitoba, an easy 2-hour drive from Winnipeg (blacktop roads the entire way). 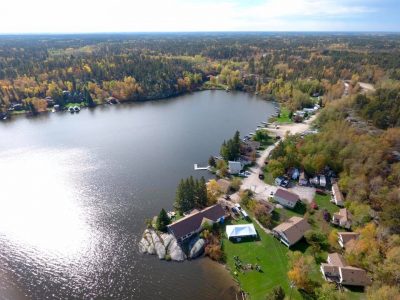 Owner Vance Hrechkosy and his family are exceptional hosts. Accommodations are clean and comfortable, food is outstanding, and the best part is Vance’s camp in located on the upper reaches of the Winnipeg River. This means you can fish each morning before hunting each afternoon. You’ll access most of the bait sites by boat; the ride is spectacular, especially the return trip to camp under the stars.

My friends and I have seen and shot some great bears at Trail End Camp and Outfitters. One of the biggest is shown in the top photo of this article.

This is one of my buddy’s favorite bear hunting destinations (photo below). In fact, I’m expecting a call or text from him saying something to the effect of “Why did you tell the world about my honey-hole?”

In this region, the big forest of the north meets the ag lands of the south, and throw in countless rivers, lakes and swamps, and you have the recipe for growing huge black bears. This is not a misprint: Agassiz guides have access to more than 3,000 square miles of prime bear habitat, meaning your chances of seeing numerous bears, and some really big ones, are quite high. 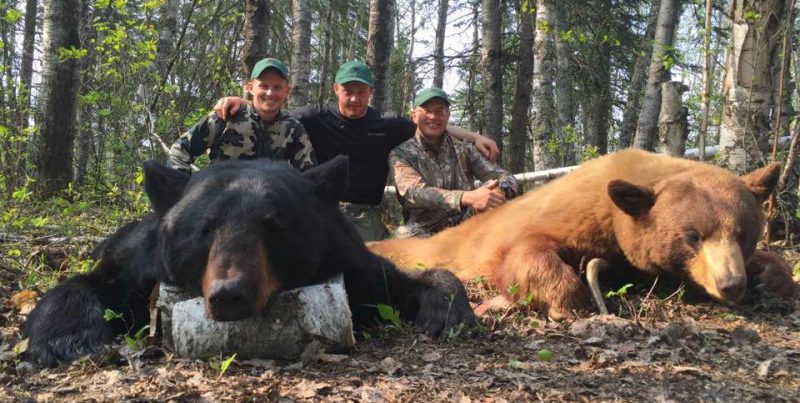 And it gets better: For whatever reason, Agassiz produces some of the finest (and biggest) color-phase bears in Canada. Unguided fishing is included in the bear hunt package; you can arrange for a guide at an additional cost.

Big Grass is another of my favorite Manitoba black bear destinations. Tom and Judy Usunier are “good people,” and time spent in camp with them is always enjoyable. 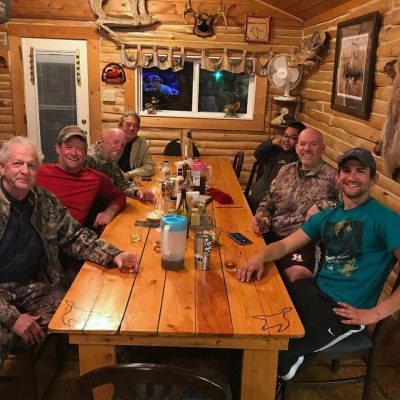 The couple conducts their spring hunts near Alonsa, Manitoba, and fall hunts near Russell, Manitoba. As their website states: “We keep our bear hunting areas fresh and do not overpressure them. Our fall bear hunting area is not hunting in spring, and spring areas are not hunted in fall, although our baits are filled. Some baits haven’t been hunted for 4 years.”

Just over half of the bears harvested at Big Grass are color-phase bruins. One more insider tip: Prior to placing hunters in the field, Tom Usunier conducts an interesting and informative “where to shoot a bear” seminar for his clients with aid of a 3-D bear target. He talks about arrow and bullet placement. With nearly 30 years of guiding under his belt, Tom knows his stuff.

If you want to experience the far north but would rather drive than fly into bear camp, then check out All Terrain Bear Hunts, which is based near the town of Thompson. 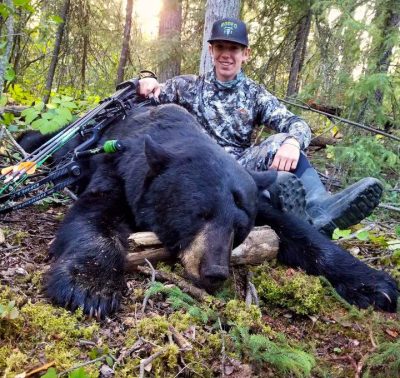 The spring black bear hunting season opens the end of April and continues into the end of June, and the fall season begins the last week of August and runs until the first week of October. “However, because of our northern location,” said Owner Cory Grant, “we don’t begin the spring bear hunt until the middle of May, and the fall hunt ends by late September. The upside to bear hunting in the North is the lack of hunting pressure, and the availability of excellent hides throughout spring and fall.” 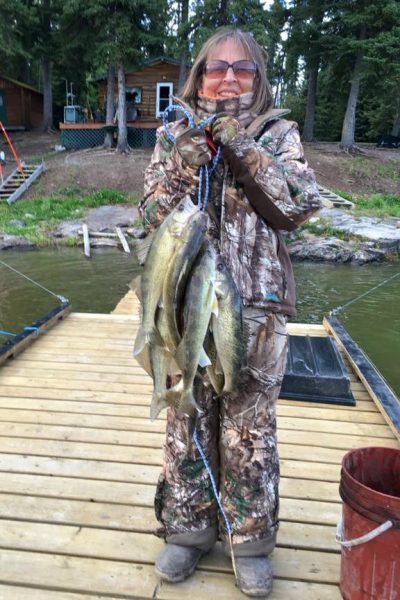 Cory offers three different 5-day hunt packages: guiding service only (accommodations and meals are up to you in nearby Thompson); guiding plus included hotel lodging and meals; bear guiding at an outpost camp/cabin with boat and motor included for fishing.

If you want to pursue black bears in a remote setting, then take a close look at Gangler’s. This fly-in only camp is 200 miles from the nearest road. As the photo below shows, Gangler’s guests arrive in style.

Not only is the bear population excellent, but the animals are big, too; 70 percent of the boars measure 6 feet, 4 inches or more, and each year clients tag bears over 7 feet. Even better, the lack of hunting pressure — and no knowledge or fear of humans — means that the bears are active at all times of the day. In fact, the bears are known to guard the bait sites! 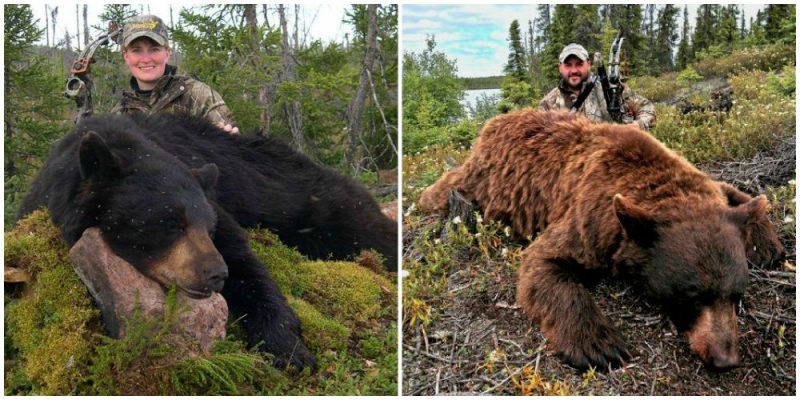 Gangler’s operates five bear camps, each one is 10-40 miles from another, with a total area measuring 7,200 square miles. Yes, you can fish, too, but keep in mind that because it doesn’t get dark this far north during spring and fall bear seasons, you can hunt morning, noon and night. Amazing! Tip: Book early because Gangler’s offers two 7-day hunts at each camp, with only 2-3 hunters per week at camp. If you want one of the best black bear hunts that money can buy, with excellent success rates in a fair-chase (and spectacular) wilderness setting, then visit Gangler’s.