After exceeding recovery expectations while protected by the Endangered Species Act, U.S. Fish & Wildlife officials in Wyoming approved the first grizzly bear hunt to take place in the lower 48 states since 1975.

WGFD has been floating the idea around for several months, and has even hosted a number of public meetings across the state to give folks an opportunity for their opinions to be heard on the proposed 2018 Wyoming grizzly bear hunt.

In the end, the commission unanimously voted 7-0, re-wrote and implemented a final set of regulations, and approved the grizzly bear hunt for this fall.

Director of the Wyoming Game and Fish Department, Scott Talbott, shared his thoughts on the matter in a news release:

“I want to thank all of the people who came to today’s meeting to participate in the process. Additionally, thousands of people commented online and truly made this regulation a better regulation. “Many, many people have been part of this process since last fall in helping to set a direction for all grizzly bear management, from education, conflict reduction to hunting. Wyoming is committed to ensuring a recovered population to provide opportunity for anyone who is interested in grizzly bears and this decision is part of our management.”

WGFD highlighted a number of things hunters need to know about the hunt:

These are just a few of the listed regulations on the WGFD website, so please take the time to read through all of them at your convenience.

Unfortunately, there is still a looming possibility that a judge could pull the plug on this hunt at the last second, as the lawsuits have already began piling up. Hunters should remain optimistic, however, as it seems Wyoming has taken every possible measure to ensure they thoroughly manage the grizzly population in a way that will reduce human/bear confrontations, but not negatively impact the long term health of the Yellowstone grizzly bear population.

To ensure hunters don’t harvest too many bears, the Wyoming Fish and Game Commission has released a list of regulations detailing how the proposed management plan works.

A majority of grizzly bears reside in the northwest corner of Wyoming, or what’s otherwise referred to as the “Demographic Monitoring Area.” The proposed plan for the 2018 Wyoming grizzly bear hunt only permits harvesting up to 12 bears (2 female and 10 male) within Hunting Areas 1-6.

Furthermore, each individual hunting area has its own specific harvest limit:

Hunters may also harvest a total of 10 bears in Hunting Area 7, however it’s believed this area extends past the core population of grizzlies in the state at this time. 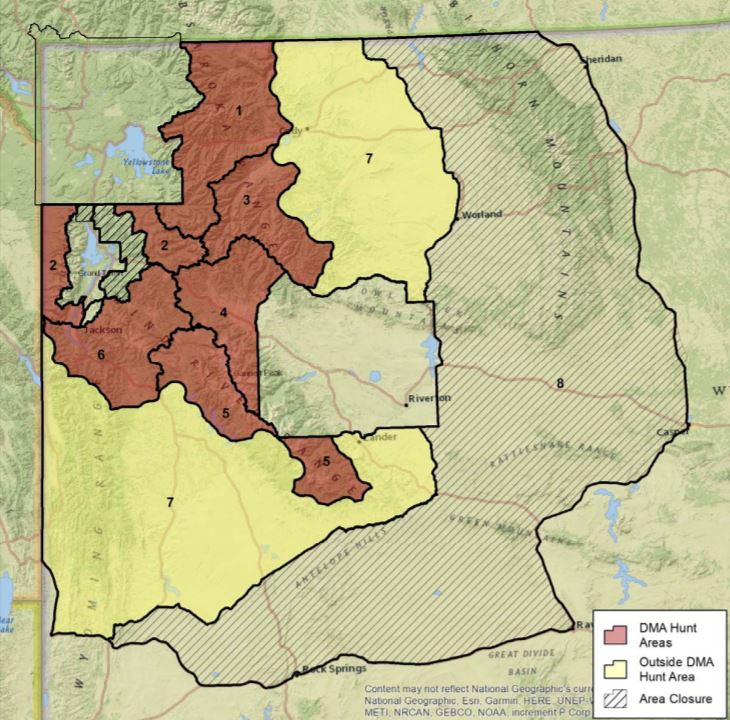