Love shooting your hunting rifle but frustrated with the results of Kentucky windage holds for elevation and wind through that plain crosshair scope? Think you might enjoy long-range shooting but want to know more? Or maybe, like me, you’ve dabbled in long-range shooting but location or expense hamper your ability to engage in the sport more often. Now there’s a fix for that—but I’ll warn you, it may have addictive qualities.

The Horus Vision style reticle, sometimes referred to as a Christmas tree-style reticle, was the first and remains a flagship in the modern era of long-range shooting. The reticle was invented and continues to be improved by Texas native Todd Hodnett, whose innate and practiced adeptness with ballistic science was honed in the Australian outback. Ranchers’ livestock grazing was being destroyed by an excess wild burro population, and efforts to control the animals had, prior to the American’s arrival, been neither effective nor humane. Hodnett’s s wet lab in this vast desert opened up opportunities to test very long-range techniques and loads to solve a real problem. Ranchers praised Hodnett and his team for their efficiency and humane destruction (we’re talking brain shots) on nuisance animals. From this odd and humble beginning, one of the biggest innovations in long-range shooting was born. 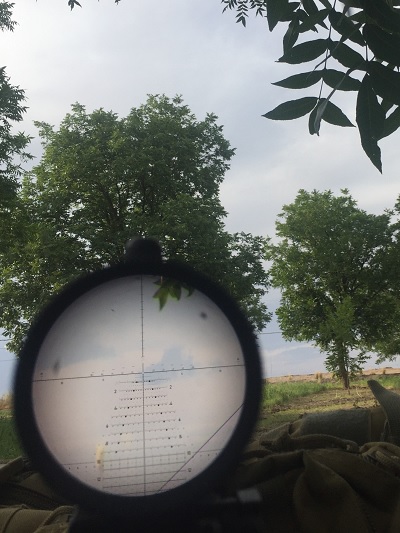 What makes the Horus different? The reticle allows any shooter with their ammo of choice to not only establish zero but to make intuitive adjustments for elevation and windage. When the benefit of known distances is given, holdovers in 1/10 milliradians (mils) can be dialed in for extreme accuracy, even at very long distances. Likewise, if windspeed is known, “wind dots”—a series of dots just above and below the major mil lines in the reticle—can quickly be used to compensate for wind shift. Each dot represents a given value depending on the load/rifle, say 4 mph. Every fourth dot is enlarged, giving the shooter an intuitive reference point. In this example of each dot representing 4 mph, if the weather reader or spotter calls the wind at 16 mph, it’s easy to visually focus on the fourth dot from the X axis.

The Horus reticle, then, is a tool for assisting the human eye/brain unit in functioning as an efficient cog in a ballistic aiming system. There have been several renditions of the reticle, and each keeps getting better at making the shooter’s job easier and faster. Hodnett and team clearly understand not only ballistic science; they’ve harnessed a new aspect of sports psychology.

It’s a great product, but regular practice for long-range shooting, especially with some calibers, can be unattainable for many reasons. Location and financial constraints are two common ones. Leave it to the Horus Vision company to come up with yet another solution—an online simulator. 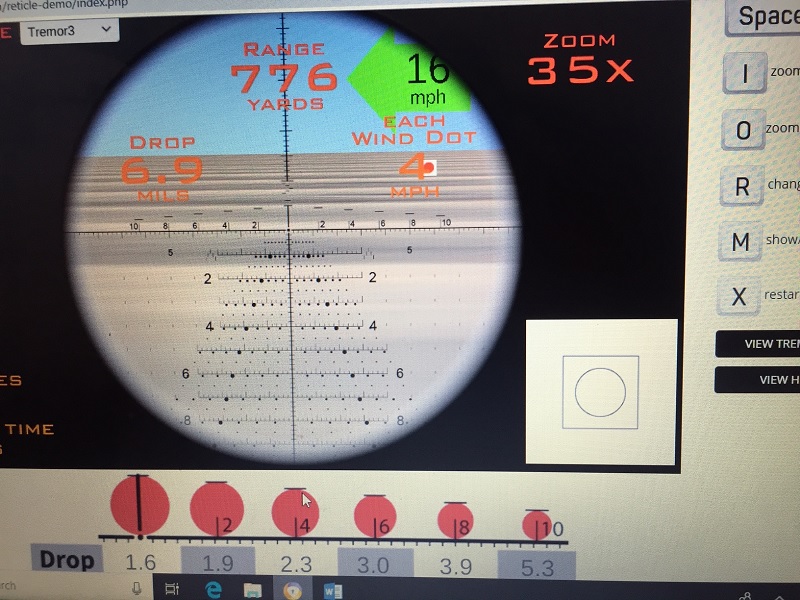 Visiting the online simulator doesn’t require an account or sign-in.  It’s free. What it does require is some load data. It defaults to .308 Winchester if the user doesn’t change the inputs, but playing with other loads can be enlightening. I often use Federal Premium’s online ballistic calculator as a starting point for developing a plan of long-range action, and it works for the simulator too. Dabbling with calibers at both ends of the ballistic spectrum, like .223 Remington versus .338 Lapua, can help the user learn about the comparative behavior of various bullets without having to buy costly ammo.

How are these lessons learned? First, all distances are known and provided. The simulator offers the luxury of calculating holdovers automatically, and tells the user the mph value of the wind dots for your chosen cartridge. Simple keyboard instructions allow users, er, players, to be up and running in a short time. The space bar is the “send it” key, flaming “hits” provide visual interest, and at the bottom right of the screen, a fancy electronic target simulator, the likes of which I’ve only ever seen on Swiss military ranges via YouTube, displays hits and misses.

The simulator can be mindless entertainment, or if one pays mind to the distance and hold recommendations, it serves as a great off-range trainer so you can get better mileage from your real rifle and ammo.

This tool does have a few shortcomings. A minor one: when entering data, the Tab key does nothing. Moving from one box to the next requires clicking into the next box. Its limitations pertinent to shooting are that it stays in safe and predictable performance zones for any given cartridge, and I’ve yet to see it venture a shot of more than 900 yards and force me down into the “crosses” section of the Tremor 3 reticle. For a description of what that means, check out Hodnett’s video tutorial of this reticle, my personal favorite as I had the opportunity to test it in a Leupold Mark 5 scope on my own Savage MSR Recon. The wind is a simplistic input too, always full-value from the right. Of course real life throws crosswinds, varying temperatures, and other luck of the draw-style variables into shooting that the simulator can’t replicate.

When I first encountered a Horus reticle, the company’s well-known H9 set inside a Nightforce scope, it was a bit intimidating, like trying to read the chalkboard on the last day of calculus class having just completed Algebra I. But with the extraordinary competence of the instructors I had through STA Training Group (check out their Instagram), I had basic competence on the reticle at the end of a half-day, and have never since wanted to go back to old-fashioned crosshairs for those long shots.

The simulator isn’t a perfect tool, but it’ll set you on the path to staying sharp on your Horus reticle or being prepared for the first time you have the opportunity to try one. Besides, it’s fun.