When we think of sharks, the image of a blood thirsty great white almost immediately flashes in our minds (thanks Jaws!). But scientists just came across a newly identified species of pocket shark that, as it’s name suggests, is not nearly as intimidating as some of its more aggressive relatives.

For one, this shark only measures about 5.5 inches long, so it’s super tiny. It’s also equipped with pockets hidden behind the pectoral fins, with glands inside that produce a bioluminescent fluid.

Oh yeah, and it glows in the dark thanks to light-producing organs called photophores located all over its body.

According to Science Alert, Mark Grace, a biologist at the National Oceanic and Atmospheric Administration (NOAA) said “In the history of fisheries science, only two pocket sharks have ever been captured or reported.”

The first (Mollisquama parini) was located off the coast of Chile in the Nazca Submarine Range in 1979. It was an adult female, roughly 16 inches long.

The second – and most recent – pocket shark discovered (Mollisquama mississippiensis) was found swimming in the Gulf of Mexico in February 2010, and has just been classified as a new species. 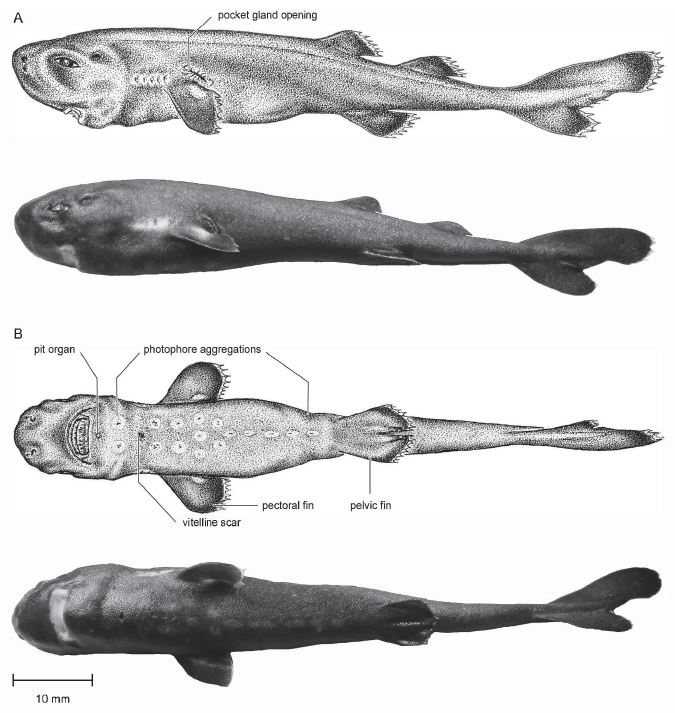 “Both [sharks] are separate species, each from separate oceans. Both are exceedingly rare,” Grace explains.

The main difference between the two: the M. mississippiensis pocket shark has fewer vertebrae, and has photophores allowing it to glow in the dark, which the original cannot.

Because there’s so much we still don’t know about pocket sharks, the reason for these photophores is still uncertain. However, since they have been found at such extreme depths (the original was found at 1,083 feet) they could play a role in anything from navigation, to finding a mate.

Can you do that, Jaws?

“The fact that only one pocket shark has ever been reported from the Gulf of Mexico, and that it is a new species, underscores how little we know about the Gulf,” Henry Bart, director of the Tulane Biodiversity Research Institute said.

The findings have been published in Zootaxa.