Here’s a little “Throwback Thursday” hunting video. If you’ve ever pulled back a bow, there’s a fairly good chance you’ve heard Fred Bear’s name before. He was an archery evangelist who spread the bowhunting gospel while carrying a recurve bow for most of his hunts, including dangerous game. This video shows him hunting Kodiak Bear in the 1950’s.

The video comes from a series called “Fred Bear World of Adventure” and this particular episode below is called ‘Kodiak Country.’

First, you see Fred and the rest of the group as they set out on a boat wearing suits and ties. Oh how times have changed!

Along the way, they get in some shooting practice by tossing floating targets overboard from the Valiant Maid and shoot them with floating arrows, then gather up the arrows and do it again. It looks like a riot!

During the adventure, Fred and his team run into a wide range of wildlife, including elk, bear, whales, sea otters, and more! (Around 18:25, they hunt a murder of crows with arrows. You definitely  don’t see that every day!)

While the men are searching for a bear to hunt, the narrator said something of interest. He said 50 yards or less is “within range” for these archers. You’d think the range would have to be considerably shorter than 50 yards with a recurve bow!

Not long after, they finally spot a big bear track and get after it.

When they locate the bear, Fred puts the stalk on it and appears to get well within 50 yards. We don’t get a good view of the kill shot at 6:45, but we’re told it was a clean lung shot and the bruin didn’t make it far. 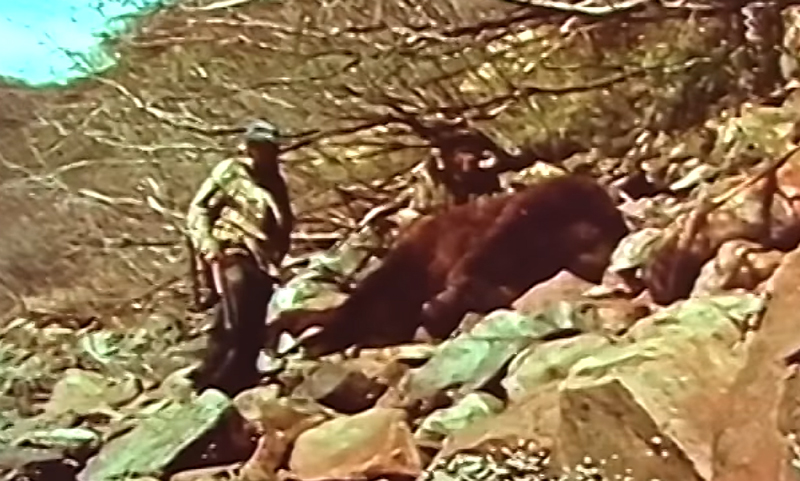 Perhaps I’m biased because I shoot a Bear bow, but I think a large number of hunters look up to Fred Bear as their mentor in the woods. You have to show respect for the best that ever did it, and when it comes to bowhunting, Fred was simply the man!

Enjoy this blast from the past hunting video!

I’ll leave you with this quote from the iconic “Fred Bear” song:

“If some of our teenage thrill seekers really want to go out and get a thrill, let them go up into the north west and let them tangle with a grizzly bear or polar bear or brown bear and get that effect that will cleanse the soul.“

Anybody else love this part of the song as much as I do? Let us know your top “Fred Bear moment/memory” in the comments below!