Field Test: Fishing from a Hobie Kayak in a Hurricane?

Field Test: Fishing from a Hobie Kayak in a Hurricane?

Okay, I confess — that title is largely clickbait, but it nearly came true. You see, I was recently invited to attend a 3-day media event in Cape Cod, Massachusetts. The plan was to target striped bass from Hobie’s Mirage Pro Angler 14 (below) and 12-foot Outback kayaks.

However, as the trip grew closer, Mother Nature decided to throw us a curveball — in the form of Hurricane Jose. True, the weather experts never expected Jose to strike Cape Cod as a full-fledged hurricane, but it would still be carrying tropical storm-size winds and rain during those event dates. Now, I don’t know about you, but as much as I’d like to tangle with a big striper from a kayak, the forecast simply made it too risky. The fact is, no matter how stable the Hobie kayaks, they wouldn’t stand a chance against sustained winds (blowing directly toward shore) of 30-40 mph, with forecasted gusts of 50-70 mph.

In the end, my host from Hobie and I decided that flying — and then kayaking — into a hurricane, or tropical storm, isn’t the smartest idea, so the fishing trip was cancelled.

Because I’d already planned on being away from my desk those 3 days, instead of simply jumping back into writing and editing for OutdoorHub, I contacted a buddy of mine in my home state of hurricane-free Minnesota who owns a Hobie Mirage Pro Angler. My friend’s version of the Pro Angler is quite a bit older than the current Pro Angler 14, but for someone like me who’s spent no time fishing from a top-notch kayak, I thought it’d be a good start.

Like the modern Pro Angler 14, my loaner measured 13 feet, 8 inches. My buddy’s kayak features the MirageDrive system that enables you to pedal instead of paddle. Note: The newer Pro Angler 14s are upgraded with MirageDrive 180, which gives the user full-power reverse, too. (See video below.) I’d have to use a paddle to back up, but hey . . . I wasn’t complaining. I had 3 days, in the Land of 10,000 Lakes, with one goal: Find and catch fish from a Hobie kayak.

As my friend explained the various features on his 8-year-old Hobie, I was amazed at how well it had aged. My buddy doesn’t baby things, yet all the components seemed to be functioning perfectly.

Because my friend also loaned me his kayak trailer (he owns three kayaks), traveling with the rig would be super convenient. And as if it couldn’t get any better, he even suggested a couple of small local honey-holes that don’t receive much fishing pressure. I couldn’t wait to get it on the water!

My first stop was a lake with a concrete ramp and boat dock about 45 minutes west of Minneapolis. The public access was quiet on this weekday morning, which was perfect for a newbie kayaker like myself. I didn’t need people laughing at me as I attempted to make my maiden voyage in a kayak.

The good news is everything went according to plan. In preparation for my trip, I spent some time watching a couple of informative YouTube videos with tips on using Hobie kayaks. Specifically, I watched videos titled, Hobie Kayak Owners Manual Part 1 and Part 2. These helpful videos explained how to install the MirageDrive system on the water; best practices for dealing with shallow water, weeds and brush; and tips for fishing from a kayak. I’m sure my fishing guides and hosts in Cape Cod would have covered all the same topics before sending me away for striped bass, so I wanted that same background before I ventured out solo in search of largemouth bass.

After getting in the kayak, I paddled away from shore a bit and then inserted the MirageDrive. It locked into place without a problem. My buddy is a bit taller than me, so I adjusted the pedals accordingly. This took only a few seconds. With air temps of 58 degrees, a 15-mph wind and the water starting to cool with autumn approaching, I didn’t really want to get wet, so I was pleased to experience a dry ride. I made my way for the calm side of the lake, and I must admit I was amazed at the kayak’s speed without me putting forth a great amount of effort. I was getting some exercise, no doubt, but it wasn’t even close to something as strenuous as jogging.

I often fish from a 12-foot johnboat rigged with a 40-pound-thrust trolling motor, and with just a steady pace to my pedaling, I’d say the Pro Angler was traveling about the same speed as my johnboat with the trolling motor set on No. 4 (speed options of 1 through 5). In other words, I was moving pretty fast! In fishing terms, it was about the speed you’d like when trolling a spinnerbait or spoon for northern pike.

After a few minutes of pedaling, I grabbed for one of three fishing rods packed for my morning adventure. And I must pause here and talk about rod storage: The Pro Angler 14 has horizontal storage for up to six fishing rods, meaning the rod tips slide into protective tubes lining the inside of the kayak. About 3 feet of a 7-foot rod slides into the protective tubes. Nice!

As I fished, I began to learn how to best control the kayak. And it didn’t take long for me to feel comfortable enough to stand in the kayak to cast. If you fish for largemouth bass in heavy cover, you know that standing allows you to work lures most effectively, and also set the hook with the most power. During my life, I’ve taken several canoe trips into northern Minnesota targeting smallmouth bass, and even though standing in a canoe to cast isn’t recommended, I’ve done it a bunch. Standing in the Pro Angler 14 is far more comfortable than standing in a canoe. Your feet are wider apart, and the kayak is much more stable. I spent an hour or more standing to cast and retrieve a topwater frog, spinnerbait and Chatterbait, and at no time did I come close to losing my balance.

Even though the bass weren’t biting well during my first trip in the Hobie, I learned a lot about fishing from a kayak. For example, skipping soft plastics under a dock is super easy when sitting in a kayak. Because you’re already low to the water, a simple sideways motion with the rod sends your lure skipping far under a dock. I caught a couple of bass off docks, and it felt like I was cheating.

As I made my way down the lake, I let the wind carry me and the kayak along the weedline. When I found a spot I wanted to fish slower, such as a dock, I simply pointed the nose of the kayak into the wind and then held my position by slowly moving the pedals. It worked great.

When I finally ended up on the windy side of the lake, the waves were nearly forming white caps. At that point, standing to fish wasn’t a good idea, so I casted while sitting, and it was during that time when I hooked and landed my biggest bass of the trip, a 17-incher. Because I was near the boat access when I landed the bass, I pedaled over to the dock and asked a shore fisherman to snap a quick photo of my fish (below) before releasing it.

One note about beaching a kayak with the MirageDrive: While you can certainly remove the MirageDrive in deep water and then paddle to shore, you can also push the two pedals away from each other to the maximum distance, which causes the underwater fins to rise and sit nearly flush with the bottom of the kayak. That’s what I did when coming to shore at the boat access. Then, after I lifted the kayak onto the trailer, I simply removed the MirageDrive when I had clearance to do so.

After a quick trip home to walk the dog and have lunch, I waited until my kids arrived home from school. My oldest didn’t have any homework, so he jumped at the chance to go fishing until dark. We drove to a lake that is accessible only by dropping in a small boat, canoe or kayak from the side of a county road. Again, I fished from the Hobie Pro Angler, and my son used our 12-foot johnboat.

Difficult/limited access often means light fishing pressure, and that seems to be the case on this lake. My son and I have experienced great fishing for largemouth bass and northern pike on this lake in the past, so we were excited to give it a shot this time around with two boats; we wouldn’t be crowded in our tiny johnboat.

Thankfully, the winds had died down a bit so we didn’t have to fight white caps, and soon we were on fish. Again, I did a fair amount of standing to cast from the kayak, and this time when I caught a decent-size bass, my son could snap a pic of it. 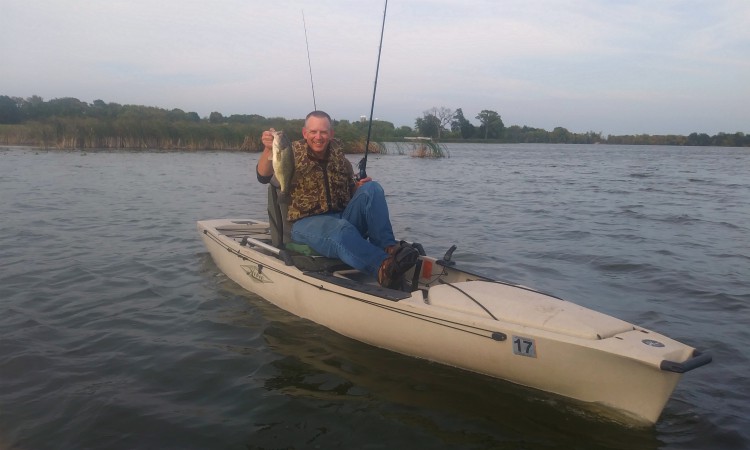 I learned something else on this trip, too: Landing a big bass is much easier from a kayak than any other boat. When you’re sitting in a kayak, you don’t have to reach down to lip the fish. The bass is right there on your level — it’s super convenient.

All in all, my first day of testing a Hobie kayak was a tremendous success. Even though I would’ve loved the challenge of battling a striper in Cape Cod, it was a lot of fun fighting largemouth bass around home. And the best part? I had 2 more days to borrow my buddy’s Hobie. Life is good! 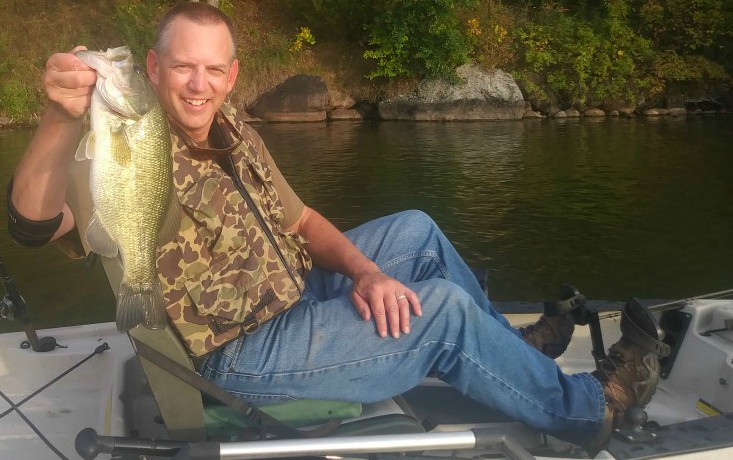