Federal Premium has revamped its turkey shotshell lineup with a family of new products. In fact, all previously available turkey products in their lineup have been replaced by several loads in three product families, including Grand Slam, 3rd Degree and HEAVYWEIGHT TSS.

Here’s what you need to know about these new loads so you can choose the right one for this upcoming turkey season.

All of the new offerings use the FLITECONTROL FLEX wad, which was introduced with the launch of Federal Premium’s redesigned Black Cloud waterfowl shotshells. As shown in the illustration below, the wad’s unique design improves pattern density and consistency when fired through ported and non-ported chokes.

“The wad’s redesigned rear-deploying brake fins and side-mounted vents stimulate the payload for separation from the wad at precisely the right moment for the densest, most consistent patterns possible,” said Dan Compton, Shotshell Product Line Manager.

To do this, Federal Premium engineers beefed up the wad’s brake system, starting by reinforcing the wad’s flexible rear fins with sturdy supportive gussets. Compton said: “We rely on gas pressure from inside the barrel to flex the fins and open them, which triggers the shot to separate from the wad. If there’s not enough pressure, the wad doesn’t slow down enough for optimum separation.”

Such pressure problems are common with ported choke tubes, which vent gas to the sides before it leaves the muzzle. However, the new FLITECONTROL FLEX wad’s improved rear-deploying brake fins eliminate that concern with all chokes.

“The brake fins open, so payloads separate exactly when they’re supposed to, regardless of the gas pressure behind them,” Compton said.

The roll crimp, meanwhile, provides uniform compression of the buffered payload, which generates consistent ballistics and better pattern efficiency, Moser added. Combined with a clear plastic card wad, it also ensures that the entire buffer remains sealed inside the cartridge.

All of the new 12- and 20-gauge loads also feature improved hull printing with a special touch any turkey hunter will appreciate when admiring a gobbler they’ve just shot.

“There is a small tape measure graphic (photo below), in 1/8-inch increments, printed on the hull,” he said. “Hunters can measure their spurs in the field with the hull to photograph and show their friends and share on social media.” 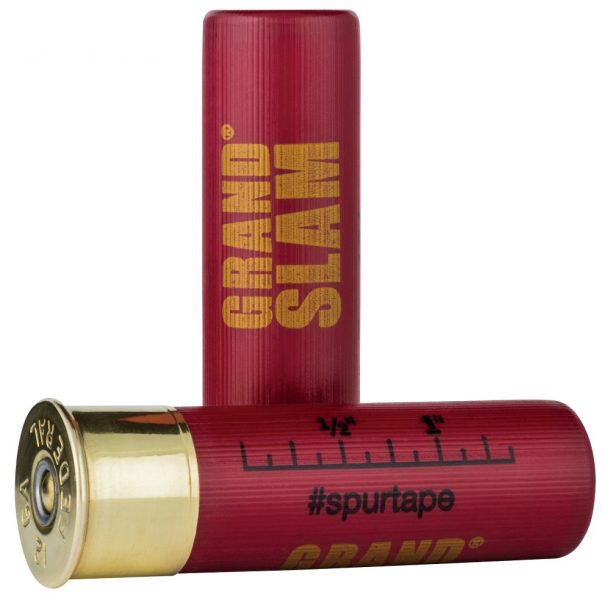 Moser added that Federal Premium has also invested in improved shell-printing technology that offers much cleaner, crisper and longer-lasting printing, so it’s easier to identify your shotshells. No longer will you have to guess if that shell from last season says “5” or “6.”

TSS is an incredibly dense shot that has taken the handloading world by storm in recent years, and it’s an integral part of Federal Premium’s HEAVYWEIGHT TSS and 3rd Degree loads. The material is more than 20 percent denser than Federal Premium’s previous HEAVYWEIGHT shot, which has a density of about 15 grams per cubic centimeter. Further, it’s 56 percent denser than lead.

“TSS is an alloy comprised primarily of tungsten,” Moser said. “It has a density of 18 grams per cubic centimeter and is harder than steel. The increased density retains velocity, and the hardness prevents pellet deformation, which improves pattern efficiency and penetration.”

Compton explained the physics behind the material’s effectiveness: “An object with higher density will maintain its energy longer in flight than a less-dense object. In pellets, the increased density will extend the lethal range of the payload. Denser pellets fly farther and penetrate deeper.”

But the advantages don’t stop there. Because of its increased density, you can use a smaller TSS pellet to deliver the same amount of energy of much larger lead shot.

“A No. 9 HEAVYWEIGHT TSS pellet carries at least as much penetration energy as a No. 5 lead pellet at all ranges,” Compton said. “This means you can greatly increase the pellet count of a payload by using a smaller shot size, but penetrate as much or more because of the increased density. Overall patterns densities are increased, so there are more hits on the target.”

In short — the days of being on target but having pellets miss a turkey’s head and neck area due to gaps in a pattern and too few of pellets are essentially over.

Better Loads for a New Season

New Grand Slam shotshells extend the range and lethality of conventional turkey payloads, putting as many pellets as possible in a 10-inch circle without breaking the bank. Federal Premium engineers wanted a shell that performed comparably to other high-end lead offerings while maintaining the former Mag-Shok price point. 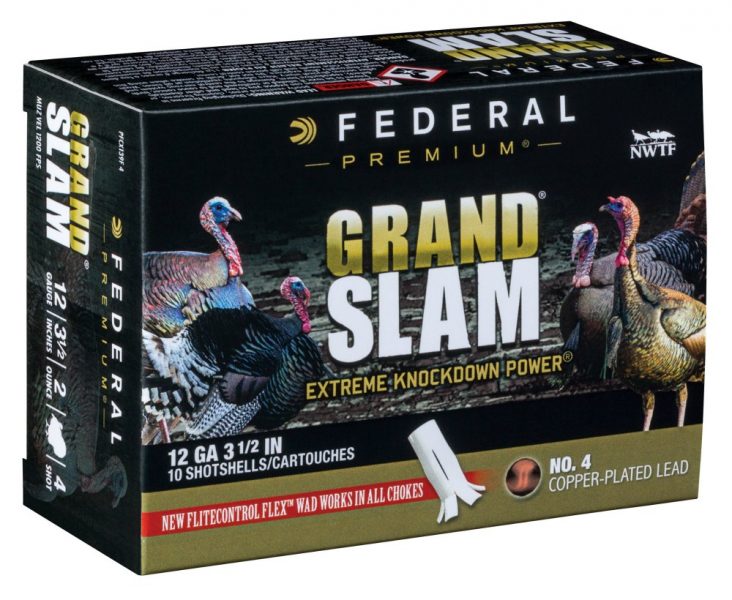 Grand Slam shells use high-quality copper-plated lead pellets that produce dense patterns and ample energy. The shot is delivered via the FLITECONTROL FLEX wad, which opens from the rear and allows a controlled release of the load, resulting in thick, even patterns through standard and ported chokes. Also, buffering prevents pellet deformation for more consistent patterns.

Turkey hunters are already familiar with the proven concept and performance of 3rd Degree, which uses a three-stage payload that makes you far less likely to miss close turkeys but can still kill birds at 40 to 50 yards with appropriate chokes. Now this revolutionary shell is even better. 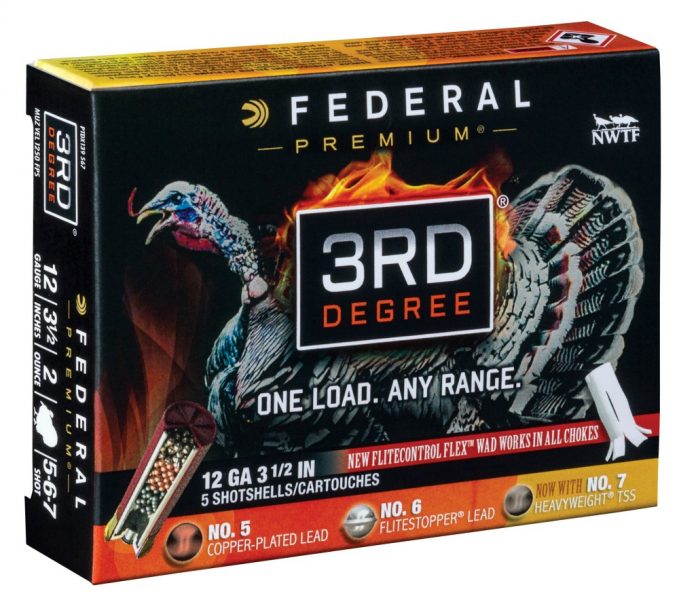 New 3rd Degree payloads are comprised of 40 percent No. 7 HEAVYWEIGHT TSS shot, 20 percent No. 6 FLITESTOPPER lead and 40 percent No. 5 Premium lead (see illustration below). The No. 6 lead pellets form a forgiving close-range pattern, the copper-plated No. 5 lead delivers lethal performance at mid-ranges, and the No. 7 TSS pellets allow dense, lethal patterns at 40-plus yards. And the new FLITECONTROL FLEX wad works with ported and non-ported chokes to maximize the characteristics of each shot type, opening from the rear and staying with the shot column longer than conventional wads to deliver full, consistent patterns. 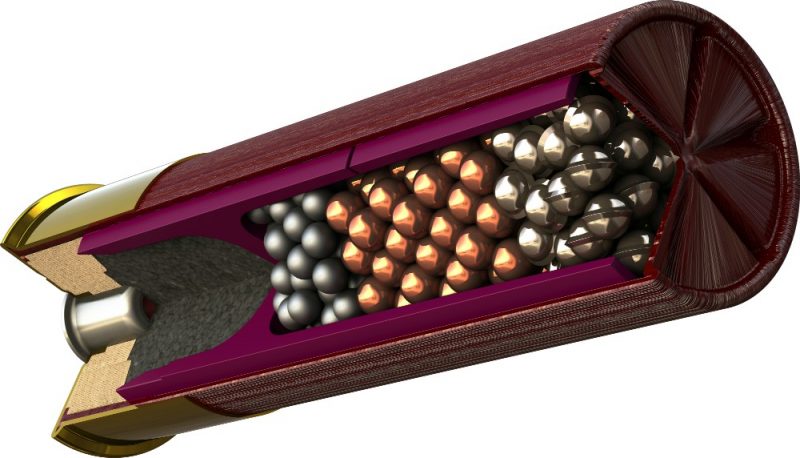 These shotshells represent a big upgrade from anything previously available, letting you kill gobblers farther than you ever thought possible. Payloads of No. 7 or 9 TSS shot provide the highest possible pellet counts — in many cases, more than double those lead loads of the same weight. The shot’s 18-gram-per-cubic-centimeter density provides optimum energy and the highest velocities at long ranges. The rear-braking FLITECONTROL FLEX wad provides the tightest, most consistent patterns possible through ported and standard choke tubes, maximizing the number of pellets in a 10-inch circle at 40 yards. 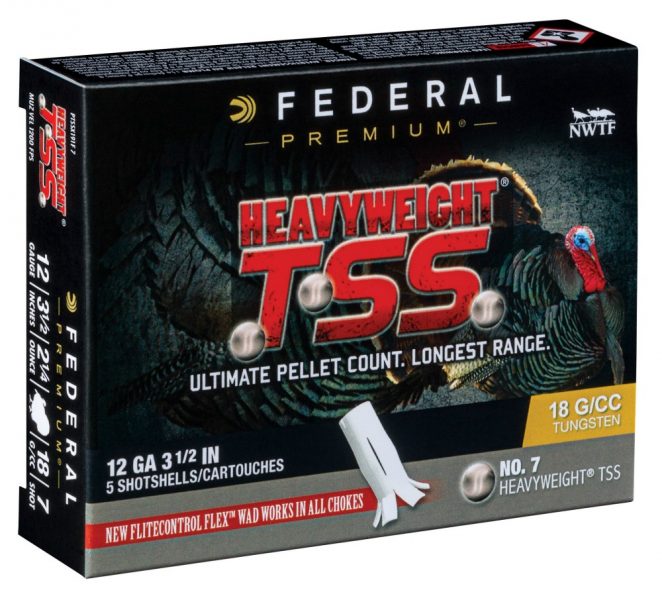 Note: The .410 load doesn’t feature the FLITECONTROL FLEX wad; Instead, it uses a specialized (also full-length) wad designed to prevent direct contact of TSS with the barrel.

The shells come in five-count packs, and a portion of all proceeds is donated to the National Wild Turkey Federation.

The .410 offering might surprise some folks, but Shotshell Product Line Manager Dan Compton said it shouldn’t, as TSS pellets’ incredible density are perfect for sub-gauge shotshells. “TSS pellets make hunting turkeys with a .410 a very viable option,” he said. “It provides the performance of conventional 12-gauge loads with a significant drop in recoil.” 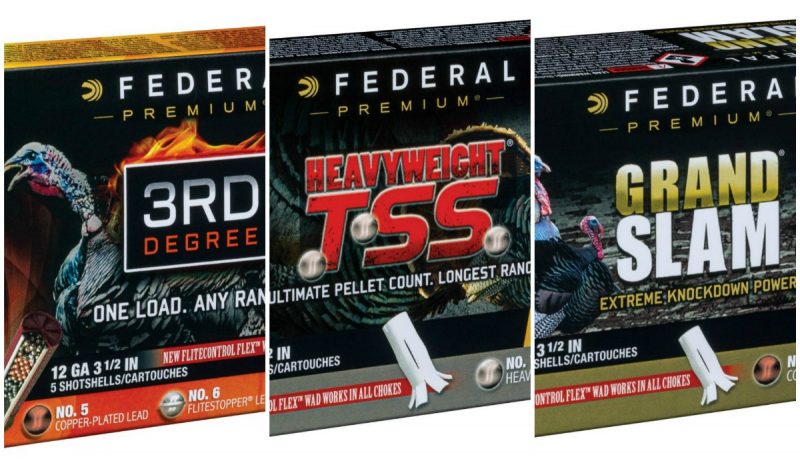