Sportsmen who spear northern pike through the ice are faced with the challenge of cutting a large hole in which to view the underwater world. And the same is true for ice anglers who want a TV-sized water window for sight fishing.

Forget about lugging a hard-to-start chainsaw onto the ice. Instead, what you need is an ice saw. While a few different companies build these specialty tools, the one that’s regarded as “best of the best” is called the Fish’s Folding Ice Saw. Check out the video below to see it in action.

To learn more about this innovative hardwater weapon, I contacted its inventor, Wayne Benbo, for the background story.

Maas: When did you invent the Fish’s Folding Ice Saw?

Maas: Was it originally designed with spearing and ice fishing in mind, or was it for a different purpose?

Benbo: It was made to cut a spearing hole, to cut around corners, and to cut circles for an angling hole without power tools. Because it’s hand operated, my Ice Saw always starts. 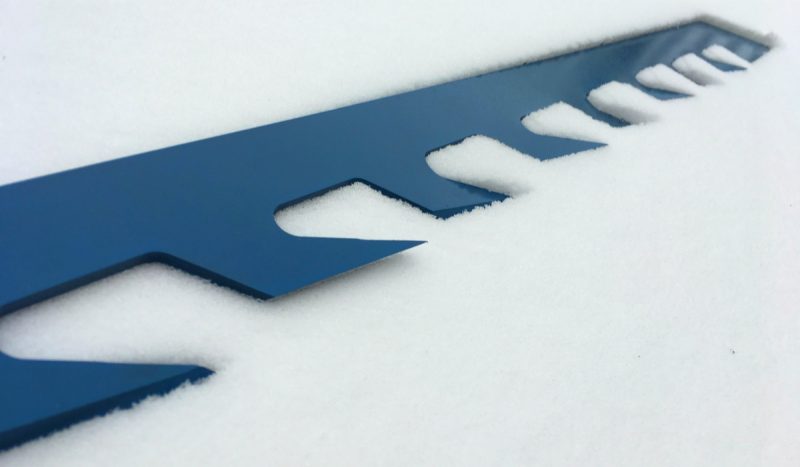 Maas: What makes it different than other models on the market?

Benbo: For starters, mine is made in the USA — specifically in Winger, Minnesota. I build the Ice Saw’s 42-inch blade with high-quality steel, and use a durable wood handle for better grip when sawing through the ice. You can chip through the ice with the pointed tip to start cutting a hole. My Ice Saw is easily recognizable with the blue blade and wood handle. Overall length is 84 inches.

Maas: And the name?

Benbo: My nickname is Fish, so that’s where the company name Fish’s Sporting Toys originated.

Maas: Walk me through the invention process.

Benbo: I started designing the Ice Saw in 1985 after using a chainsaw to cut holes for many years. The old-time hand ice saws would cut in only a straight line. And with small teeth, these existing saws took a great number of strokes to cut any distance in the ice. I figured there had to be something better.

I drew out a new blade design featuring bigger teeth and then had a company cut out the iron. But my first saw wouldn’t cut at all. So, I sat back down while looking at my original design and tried something else. The result? Another failure. Followed by more saw designs and more failures.

Eventually, I made one that would saw through ice, but it wouldn’t cut around a corner. So, it was back again to the drawing board to make more changes. Finally, I came up with the blade design I use today; it cuts around corners and even cuts circles in the ice.

All the initial testing was done on a stock pond at my farm. It was getting so it was hardly safe to walk out on the stock pond due to all the test cutting!

My first ice saw had a broomstick handle and wouldn’t fold. Unfortunately, it ended up being spring, and I had to get back to farming, meaning development slowed up a lot on the project until fall.

A few months later, I began working with a local manufacturing company. We had to decide on what saw blade material to use. We used an AR (abrasion resistant) steel material until a couple of years ago when the steel mills cheapened up the quality of the steel. Now, we’re using a T1 steel.

The next problem was figuring out how to fasten a handle and have it fold and lock in both positions. Once that issue was resolved, we found a supplier for wood handles. To this day, the handles come cut to length and are varnished, but I still have to put the slot in the handles and finish them. I also needed a recognizable blade color. After trying different ones, I settled on Harbor Blue.

On all the first Ice Saws, the angle was ground with an angle grinder and sharpened with a hand file. I later progressed to a belt sander, and kept getting bigger belt sanders to put the angle on.  Now, all the blades are laser cut, and the angle is machined on them. I now use small hand-operated belt sanders to sharpen them.

I didn’t start this process with thoughts of it turning into a business. I made myself one ice saw to use spearing, then a friend wanted one.  A few more people wanted one, and as more got out there, the more I made to sell. Finally, a buyer from L&M Fleet Supply in Grand Rapids, Minnesota, heard about it and wanted a sample, so I sent him one. They have sold lots of them since then and still do.

As time went by and word spread, other stores wanted Fish’s Folding Ice Saws, and a distributor wanted to handle them, too. Of course, the internet and my website have helped immensely, too. I’m proud to say that my Ice Saws have been shipped to many countries.

The way it worked out, with all this dedication to make a high-quality ice saw for myself, it turned into a profitable business. And in addition to being used for ice fishing and spearing, people are buying my saw for snow carving, ice sculpting, diving, trapping, search and rescue, and the list goes on and on.

Believe it or not, the Fish’s Folding Ice Saw has been so successful that I don’t have time to ice fish anymore! We make them year-round to fill all our orders.

Maas: I spent a bit of Christmas money on a Fish’s Folding Ice Saw and can’t wait to give it a try this upcoming weekend. I love to sight fish, and doing so from a massive hole is only going to add to my enjoyment on the ice. Wayne, thanks for taking the time to answer my questions, and keep up the great “made in the USA” work!