Maybe you’re one of those old school ice anglers who prefers to stare at a bobber in the hole and hope a fish wanders by. If that describes your hardwater system, then you can stop reading now and go back to sharpening the blades on your push reel mower.

However, if you enjoy seeing what’s happening below the ice in real time, and in living color, then pull up a 5-gallon bucket and listen close.

Advanced underwater cams are equipped with probes that reveal water temperature at the depth you’re actually fishing — often a totally different degree than the surface temp shown on your sonar screen. Ice anglers, for example, are discovering the frequency with which fish flock to warmer pockets amid otherwise near-freezing water. The only way to know for sure is to drop the camera optics, and see for yourself the actual temperature and any fish in the neighborhood.

Another step forward has occurred as enhanced sonar screens now do justice to live color video. Consequently, folks who run video-enabled units — such as Raymarine eSeries or the new Raymarine Axiom Pro — gain the bonus ability to plug their underwater camera right into their sonar screen (below). 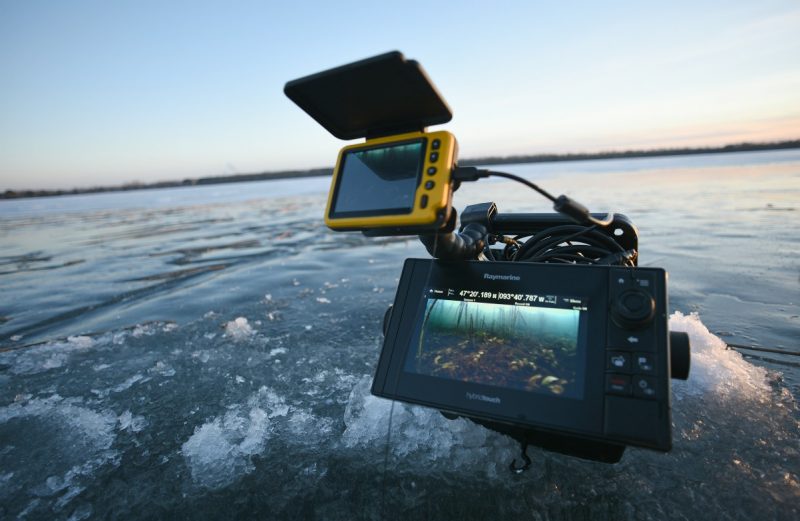 Want to watch sonar and live underwater video at the same time? You got it. Sonar, GPS map and video? Yep. How about capturing still images and underwater video clips for later reference, or to share with friends? That’s possible, too.

And this is a game-changer you can surely appreciate: You can use your underwater camera to visually confirm fish species and the real-life appearance of structure, and then save the spot as a GPS waypoint — all on the same unit. Or stated another way, “Beam me up, Scotty.”

To see this amazingly advanced system in action, check out the video below from Minnesota angler Jim Edlund. In the north country, the ice isn’t going anywhere for many weeks, so why not get off the couch and have a blast targeting late-winter panfish? With modern tools at your disposal, it’s must-see TV.