Video: Will .410 Be the Next Turkey-Hunting Trend?

Video: Will .410 Be the Next Turkey-Hunting Trend?

Tungsten Super Shot (TSS) is an incredibly dense shot that has taken the handloading world by storm in recent years, and it’s an integral part of Federal Premium’s HEAVYWEIGHT TSS and 3rd Degree loads. Regardless of whether you choose to shoot 12 gauge or 20 gauge in the spring turkey woods, you owe it to yourself to check out TSS.

That said, when developing new shotshells for 2018, Federal Premium didn’t forget about the .410 bore. In fact, the company’s engineers set out to create loads using small TSS pellets in .410 bore that would rival what handloaders have achieved. This task resulted in a 3-inch .410 load (photo below) with 13/16 ounce of No. 9 shot that uses a specialized, full-length wad designed to prevent direct contact of the super-hard TSS with the barrel. 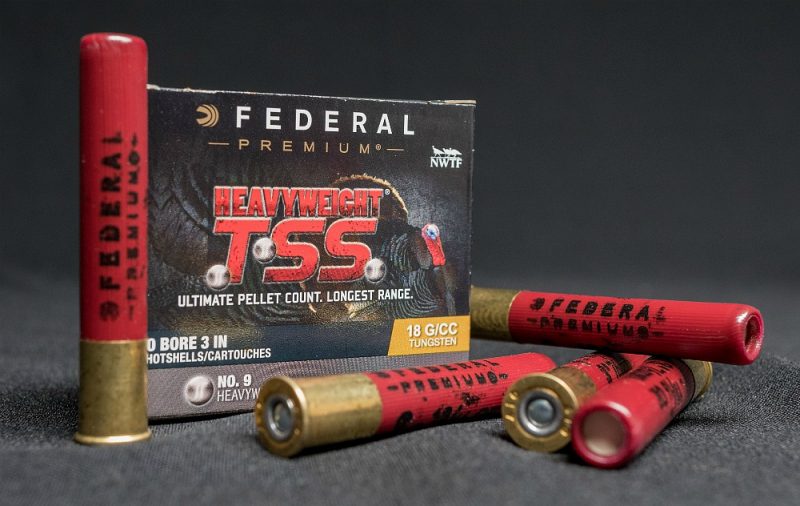 TSS material is 56 percent denser than lead, which means a No. 9 HEAVYWEIGHT TSS pellet carries at least as much penetration energy as a No. 5 lead pellet at all ranges. Because of this fact, Federal Premium was able to greatly increase the pellet count of a payload by using a smaller shot size, but penetrate as much or more because of the increased density.

A 13/16-ounce .410 load of No. 9 TSS has about 295 pellets. When engineers tested the loads at the Federal Premium factory using a shotgun with a 24.5-inch barrel and fixed full choke, they averaged 125 to 150 pellets in a 10-inch circle at 40 yards. These numbers prove the load will be deadly on wild turkeys. These numbers even rival those produced by some 12-gauge turkey guns using No. 4 or No. 5 lead loads.

Test results also showed more than 3-inches of penetration in ballistic gel. And this is not a misprint: When tested with a thin sheet of steel at 40 yards, the .410 load dented the steel deeply, and a few pellets (circled in pic below) busted completely through the sheet. 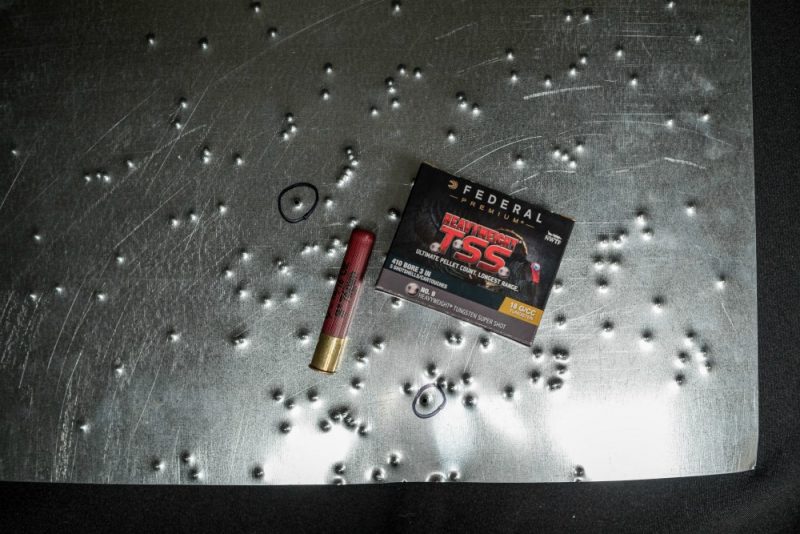 Heavyweight TSS .410 bore loads definitely have the patterns, down-range energy and penetration at 40 yards to be effective at killing wild turkeys. 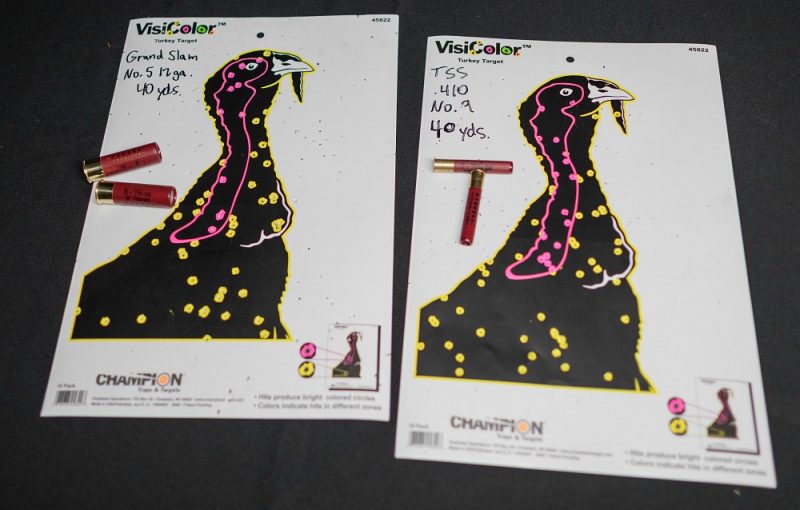 The photo above compares shot patterns on turkey targets: On the left is Federal Premium Grand Slam 12-gauge Copper-Plated Lead No. 5. This new ammo is fantastic with the FlightControl Flex wad, new buffer system, new hull printing and tight roll crimp. Standard loads like this one have been killing turkeys for decades. On the right is Federal Premium HEAVYWEIGHT TSS .410 Bore No. 9. This awesome new load turns the .410 into a viable turkey gun. It’s important to note that both targets were shot at 40 yards. Both loads placed more than 100 pellets in a 10-inch circle, and both placed more than 10 pellets in the vitals. The performance similarity between two strikingly different loads is incredible.

Check out the video below to see the new .410 HEAVYWEIGHT TSS load in action. Pay close attention to the video at the 41-second mark where it shows an old-school .410 load with No. 4 lead pellets on a turkey target. This new ammo will be amazing regardless of the shotgun you carry for wild turkeys.