Are you aware of the Walther P99 and PPQ pistols? If so, then you should also be aware of the Canik TP9 series of handguns.

That’s because the Canik TP9, imported by Century Arms International, is essentially a clone of the P99 pistol, only it’s also designed to be a much cheaper affordable while not sacrificing on quality. The specific Canik TP9 pistol that we are going to take a quick but informative look at today is the TP9DA. 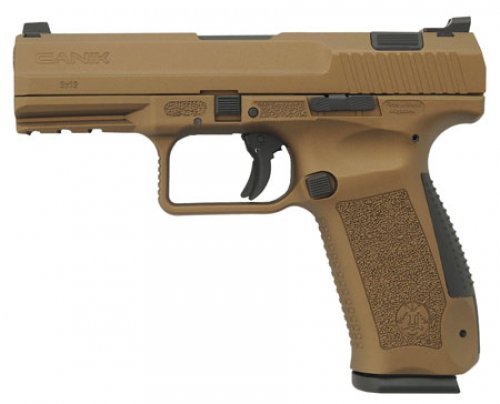 The History and Concept of the DA/SA Striker Fired Pistol

Similar to the P99, the TP9 series of pistol in general is a striker fired DA/SA pistol. In other words, the trigger system is incredibly similar to say a Beretta 92, SIG Sauer P226, or HK USP, except that it lacks a hammer and instead uses a striker.

This means that just like any other DA/SA pistol, the first trigger pull is long and gritty, while all subsequent trigger pulls are short and crisp. With a hammer fired DA/SA auto, to decock the weapon and put it back into the DA mode (which is a far safer way to carry), you would either gently decock the hammer manually or you would engage the decocking lever (as the Beretta 92 and SIG Sauer P226 have) to safely drop the hammer.

When it was released in 1997, the Walther P99 was incredibly unique because it was virtually the only DA/SA striker fired polymer framed pistol offered by a major manufacturer. But that was then, and today, the Canik TP9 offers a far more cost-effective alternative.

Important Features of the Canik TP9DA

The TP9DA in particular has the DA/SA trigger system, with a 4.07 inch barrel, a loaded chamber indicator, an engaged striker indicator, and two interchangeable back straps to accommodate different hand sizes.

Speaking of the magazines, they are not made by Canik but are rather made by Mec-Gar. Mec-Gar is one of the largest magazine makers in the entire world, and in fact, several pistol companies use Mec-Gar made magazines only with their logos on them. Examples of companies that do this include Ruger, Smith & Wesson, and Walther. Mec-Gar magazines are known for their extreme reliability and high quality, which only adds onto the overall value of the TP9DA.

Canik is well known for offering a complete ‘kit’ when you buy the pistol. In addition to a plastic case, you’ll also receive a manual, small cleaning kit, two magazines, trigger lock, a mechanical retention holster that can be converted from a paddle to a belt system for carrying, and the Canik pistol itself. MSRP of the TP9DA is $425, though Canik pistols are routinely available for around $350 or less, providing you with a truly incredible value.

The Canik TP9DA is also only chambered for the 9mm Luger round, as all Canik pistols are. .40 S&W, .357 SIG, or .45 ACP versions are presently not available.

Another neat feature about the TP9DA is that its magazine will work in the Walther PPQ 9mm pistol, even though they will extend a little beneath the grip of the gun. So if you have the PPQ as well, you can use it with an 18-shot capacity.

Finally, the TP9DA is also available in both black and dark bronze color configurations.

You might be wondering, how can a $300+ pistol possibly be as high quality as other, more well-known manufacturers?

Well, the Canik is built and tested to NATO standards, and the TP9-series of pistols have been routinely tested to fire up to 60,000 rounds or more before encountering any kinds of problems, which is far beyond the 15,000 to 30,000 round count life that most service pistols are expected to have.

And as was discussed previously, Canik pistols use high quality Mec-Gar made magazines.

Here are some of the specs of the Canik TP9DA pistol:

You’re getting a lot of gun for the money and a lot of other great items in the box when you buy the gun, including a cleaning kit and holster.

The TP9 pistols from Canik provide some of the best value for any pistol on the market. If you’re looking for a high-quality pistol at a low price point, the Canik should absolutely be present on your short list of options.