For many of us, when we read the words “combat pistol”, images of an HK Mk23 sporting an obscene 12” suppressor and some strange German flashlight/laser combo, riding in a black mid-thigh holster, come to mind. That image eventually morphs into much smaller, lighter, 9mm pistols that are likely striker fired and often bearing a low profile carry optic. The transformation in our mind is guided by the pain in our backs, knees, and shoulders; reminders of the old and very true adage that ounces equal pounds and pounds equal pain.

The Grey Ghost Precision Combat Pistol Compact (CPC for short) is a manifestation of what Grey Ghost concludes is the best combination of modern advancements in practical pistol features and technology. 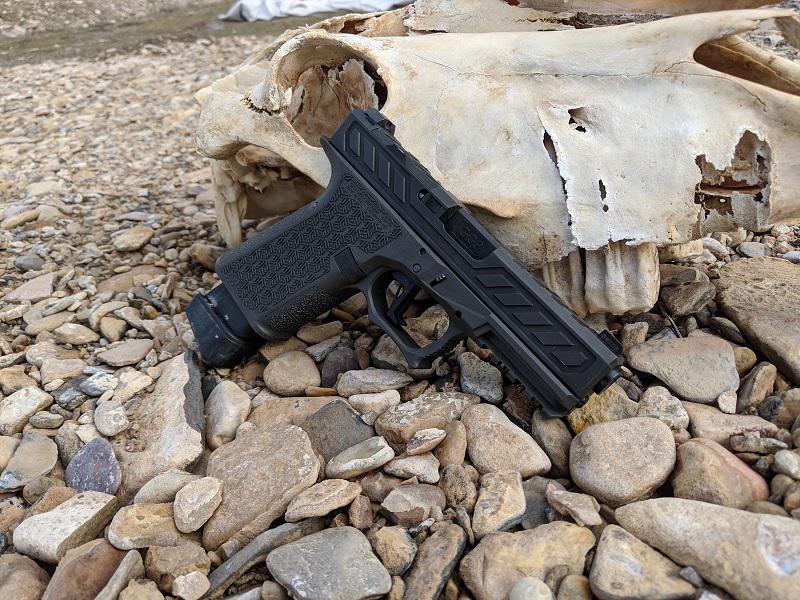 The CPC is the standard size of a Glock 19, and should, theoretically, fit in all G19 compatible holsters. I love the Glock 19, and have recommended it more than any other pistol, as its size and weight strike a near perfect balance between a small carry gun and a full-size pistol. The CPC shares all the advantages of the 19’s size and weight, and if the budget allows, will be high on my list of recommended pistols for those looking for a very well executed “do it all” pistol.

The slide has a ‘Glock-like’ profile, but with a number of functional additions to it. I want to emphasize the word functional, which in the custom gun world often gets conflated with the word ornamental. The knurling on the turrets of my scope are functional. The fluting on the barrel of my bolt gun is ornamental. The slide serrations on the Grey Ghost Combat Pistol are functional. On the sides of the slide, the cuts make a parallelogram formation, angled toward the muzzle. On top of the slide, the cuts are in what I would call a “decapitated chevron” formation, again, angling toward the muzzle and are cut at the same depth as those on the side. 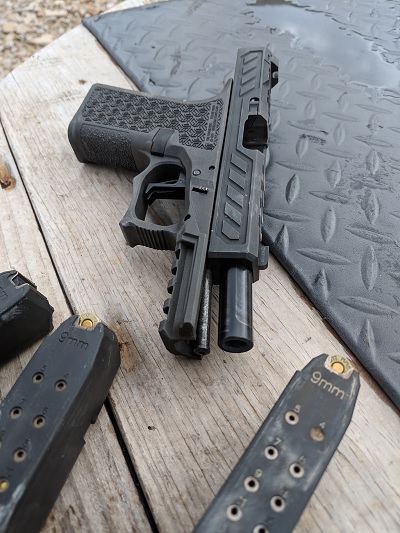 The cuts provide adequate purchase when charging, press checking, or downloading the pistol from a variety of positions, gloved or bare-handed. With the raised portion of the cuts being, for lack of a better term, pointyish, it’s important that the cut depth is just right: deep enough for the feature to create the needed friction, but shallow enough not to chew up an ungloved hand, holster, or garment. I handled this gun in less than ideal gripping conditions (cold, wet, muddy) and I’m glad to say that slide manipulation was never an issue.

I was happy with the execution of the slide and was similarly pleased with the frame. The frame offers a lot of features without overdoing them. In an age of high-end, bikini-clad, Instagram pistols, which are exaggerated in every feature, the designers at Grey Ghost did an admirable job showing restraint with the CPC. The undercut on the trigger guard is deep but no so deep that I’m worried about snapping it. The griptape like texture on the front strap and back of the grip has enough bite to keep the pistol from squirming out of my hand during extended strings of fire, but is mellow enough that I didn’t leave the range with chewed up hands. Although it wasn’t specifically tested, I feel like it would be concealed carry clothing safe. The same ratio of bite to comfort is applied to the cleverly designed texture on the sides of the grip (in a GGP pattern).

The sights are at a standard G19 height with tritium illumination, a U-notch rear sight, and bright orange front sight. A practical configuration for the intent of this pistol and very similar to the setup on my personal carry gun.

Pistol mounted optics have evolved from being an impractical, cumbersome accessory, found primarily on open class race pistols, to being commonly found on pistols designed for gun fighting. Advancements in optics technology has paved the way for smaller, more reliable, red-dot optics, making the option of mounting one on a combat pistol much more practical. My primary carry pistol sports a Leupold DeltaPoint and has for the last year or so. The benefits of a pistol mounted optic are many and will likely be discussed in a future article.

Regardless of your position on carry optics, the CPC can accommodate your needs. In addition to the practical iron sight setup, the slide is optics ready, so the end-user has the option of running their preferred sighting system. During testing, I ran the pistol as I received it, only using the iron sights.

The grip angle on the CPC was designed to closely resemble that of a 1911. I have grown accustomed to the often-maligned Glock grip angle and don’t find it to be an issue. I do, however, appreciate the natural and intuitive attitude of the 1911 grip angle. I think with the CPC’s deviation from the Glock standard, this pistol will appeal to many who have foregone the Glock in favor of other options due to “feel in the hand”.

The trigger is a CMC drop-in, which is what I run in my current carry pistol. I found the trigger in this particular pistol was not quite as smooth and crisp as my own, but I can’t account for any misses because of it. It’s possible that the difference in feel between the two triggers is that I have many thousands of rounds through my personal pistol, and the CPC is brand new. 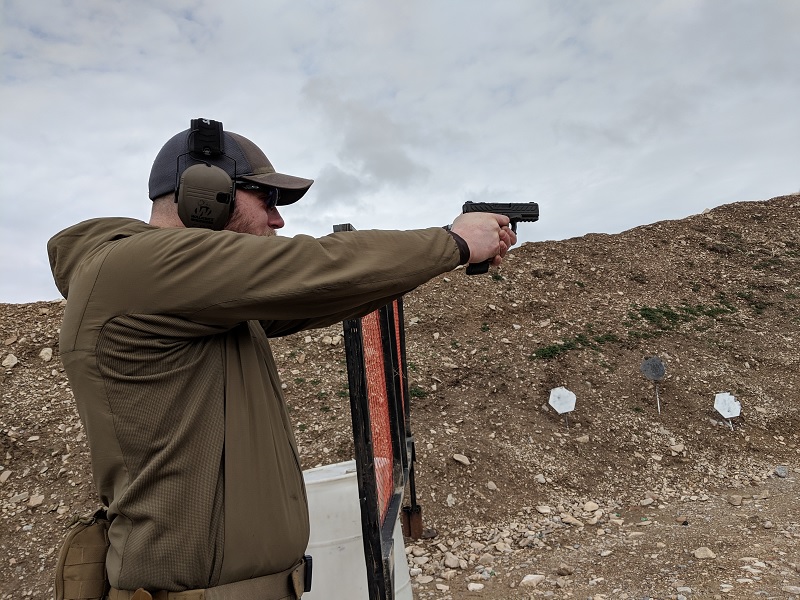 I took the CPC to the range on a wet, cool, muddy day. There had been a mix of rain and snow almost the entire day previous, and the slick, soupy clay was causing all sorts of issues in the pistol bays. I am very fortunate to have access to an incredibly well put together range (many thanks to Paul and Casey) with a huge variety of targetry and the freedom to shoot and move safely.

To warm up, I decided to shoot an array of silhouette targets at 30 or so yards. After over a year of shooting only one pistol, and that pistol having a red-dot optic, it took me a minute to establish my bearings. Bearings established, I moved to a plate rack, then to some shoot and move stages, followed by a steel challenge stage, and then I attempted some semi-precision shooting at targets from 50 to 75 yards. 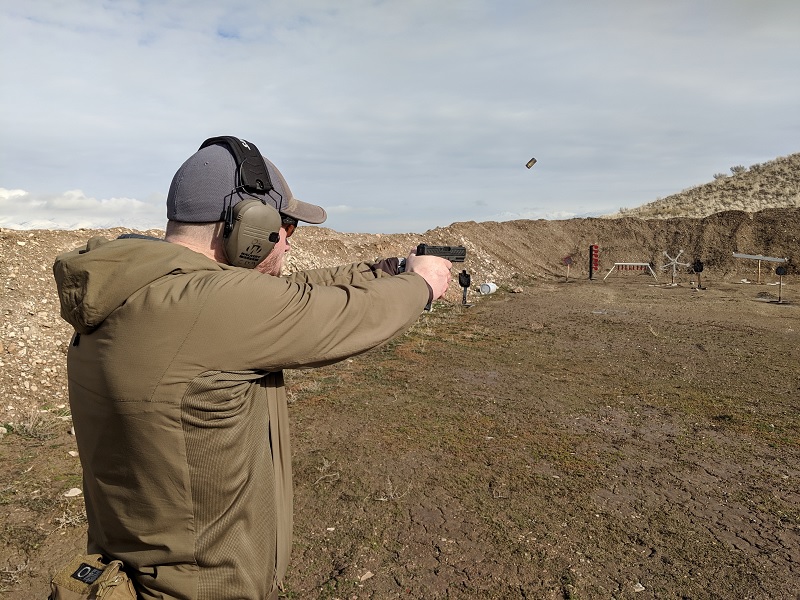 I ran many iterations of each stage putting hundreds of rounds down range. From that range trip, I came away with a handful of conclusions: the CPC was accurate, comfortable to shoot, and easy to handle and manipulate in cold/wet conditions. The sights were quick to pick up and transition from target to target, the grip stayed firmly planted in my hands through every stage, and I am confident that all my misses are my own.

Through the hundreds of rounds fired that day, across a number of different shooters, in less than ideal conditions, there was only one malfunction. I believe the cause of this particular malfunction would have choked any pistol regardless of make or model. It was due to me, clumsily, dropping a loaded magazine, feed lips down into the mud. I picked the magazine up, and without wiping it off, inserted it into the magazine well and depressed the slide lock. The first round fed ok, but the second round stopped it. The feed ramp had a thick layer of mud which forced the second round on too steep of a trajectory and caused a stoppage.

I simply locked the slide back, ejected the magazine, removed the mud from the feed ramp with my index finger, wiped the magazine on my pants, and continued shooting. No further issues arose after that.

The CPC has a price tag of $1,499. It would appear that this is in line with what similarly configured custom pistols.

Grey Ghost did, in my opinion, an excellent job with the CPC. It fits the bill in all things that I think should be featured on a combat pistol. If I were in the market for another pistol of the sort, I would strongly consider the Grey Ghost Precision Combat Pistol Compact.