The Top 5 Turkey Calls for your Spring Hunt

The Top 5 Turkey Calls for your Spring Hunt

Turkey hunting can be one of the most exciting ways to spend time in the great outdoors — and one of the most humbling as well. To gain the edge, you need to put in a lot of time and have the right gear. Do you need to spend a lot of money and fill a huge vest full of calls and gear? No… but using the best you can get and learning how to use more than one type of call can definitely give you an edge. To that end, here are the top 5  turkey calls you can put your hands on.

This call will always top my list of turkey calls, for a few reasons. For one, it was my father’s only turkey call, and that makes it special. On top of that, it’s about as versatile as a box call can get. The striker can be used on both sides of the box, which allows you to sound like a sweet and loving hen or an old raspy tom. With a little practice, you can use the old faithful two-sided Lynch Box to purr, putt, yelp, and cutt… and even gobble when the time is right.

The Easy Yelper from Quaker Boy is a great call for beginners which also works well for experienced hunters. I never head to the turkey woods without mine, which is a Double version they don’t seem to make anymore.

You can push or pull on the dowel that moves the paddle-type striker. Vary your speed and pressure to make clucks, putts, yelps, and purrs — and you get a different tone when you push vs. when you pull. You can even use it to make an aggressive “fighting purr,” which I’ve employed to bring in a stubborn gobbler who just wouldn’t respond to other calls.

The Thunder Twister is a gobble call I’ve been carrying for a year or two, and I really like it. It’s one of the easiest calls you’ll ever use, and it can be completely silenced so it doesn’t start “talking” while you’re walking through the woods.

The Twister consists of a plastic tube which contains the reed and a twistable portion which acts as a valve to block air movement across the reed, attached to a camo-colored rubber bellows. To use the call, just twist open the valve, hold the plastic tube, and shake it.

Gobbles make great locator calls and can also be used to spur territorial toms into action by making them think another gobbler is moving in on their hens.

As always, use care when gobbling while turkey hunting — you don’t want another hunter to close in on you, thinking you’re the bird he’s after.

The Smokin’ Gun box call is one of the most durable box calls I’ve ever laid hands on — and best of all, it’s waterproof and never needs chalk.

If you’ve hunted turkeys much, you know that turkey woods are often wet. Whether it’s fog and dew in the early-morning woods or a spring downpour that dang near drowns you, things often get damp or downright wet and that often plays havoc with turkey calls. Water changes the way the striker and box react to one another.

The Smokin’ Gun has a light gray substance applied to the striker and the top edges of the box sides, where the striker moves across them to generate sound. Whether wet or dry, these work just the same and make the same sounds… and the sound never gets weird because the chalk has worn off, since it doesn’t need any chalk. 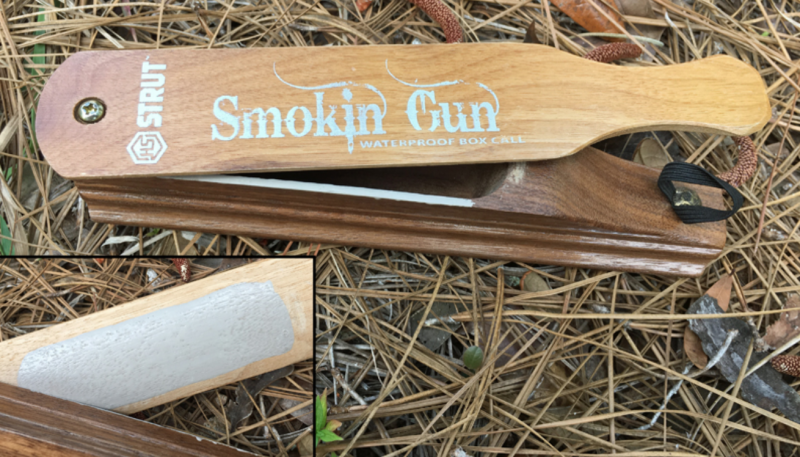 One of my favorite features is the elastic strap tacked to the box for securing the striker so it doesn’t move while you’re walking through the woods. All turkey calls should have some simple way to silence them, and this works pretty well. You could probably put a semi-loose-fitting rubber band around box and striker so you could make gobbles with this call as well.

When you want a mouth call, you want a good one, and the H.S. Strut diaphragm calls I’ve used have lasted longer than any others — all while sounding good when I do my part.

That last part is one reason I don’t use mouth calls often. I’m just not really good at it and it tickles the ceiling of my mouth… but if you can master a mouth call you’ll have a great way to coax a wary old tom without having to move your hands, and that can be invaluable. Having a variety of tones available is also a great thing, because if you just keep on making the same calls you’ll never pull that bird in close enough to shoot. 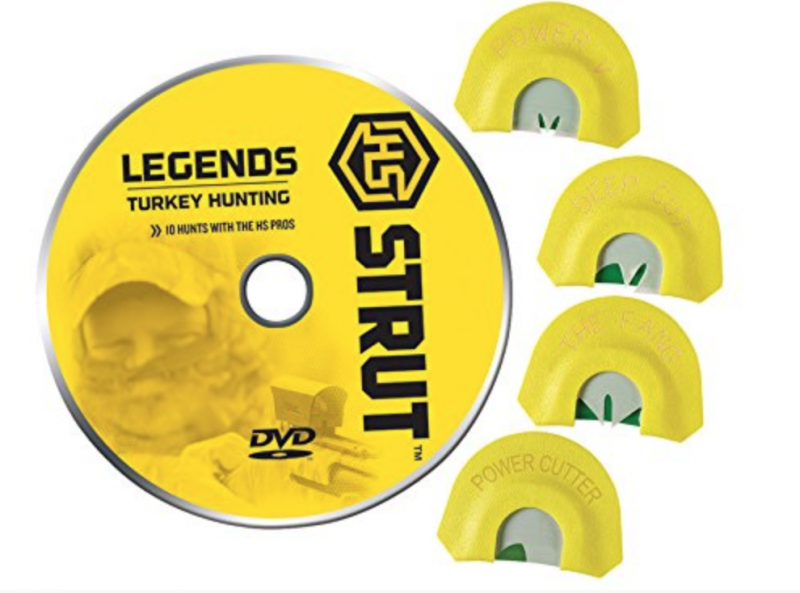