We are already less than two months away from the major fall hunting seasons. Are you ready? Perhaps you still have a laundry list of things you still need to get done before climbing into your treestand on opening day, including finding a spot to set it up! We understand this search for the perfect tree can lead you to many different corners of the woods, so you need a trail camera built to adjust in changing weather AND light conditions. Check out what Bushnell has been working on lately: They just announced the NEW Bushnell CORE trail cameras featuring Low-Glow & No-Glow variants.

Steve Smith, the Bushnell Product Manager, goes on to elaborate a little bit about each of the new trail cameras that are now available and ready for scouting:

“Good trail cams take great pictures during the day. Better trail cams take great pictures at night. Bushnell’s CORE Cam DS with Dual Sensor technology does both. With two sensors – one optimized for sharper day pics, one for more detail and contrast at night – the CORE DS leads the pack night and day. Now, finding the best trail camera is as simple as: Good. Better. Bushnell.”

Within both the Bushnell CORE and CORE DS Trail Cameras you have options of a low-glow and no-glow variant. This affords hunters more options to choose a trail camera specific to their environment and what game they may be chasing. The specifications along with pricing and their associated sell sheets can be read below as presented by Bushnell. 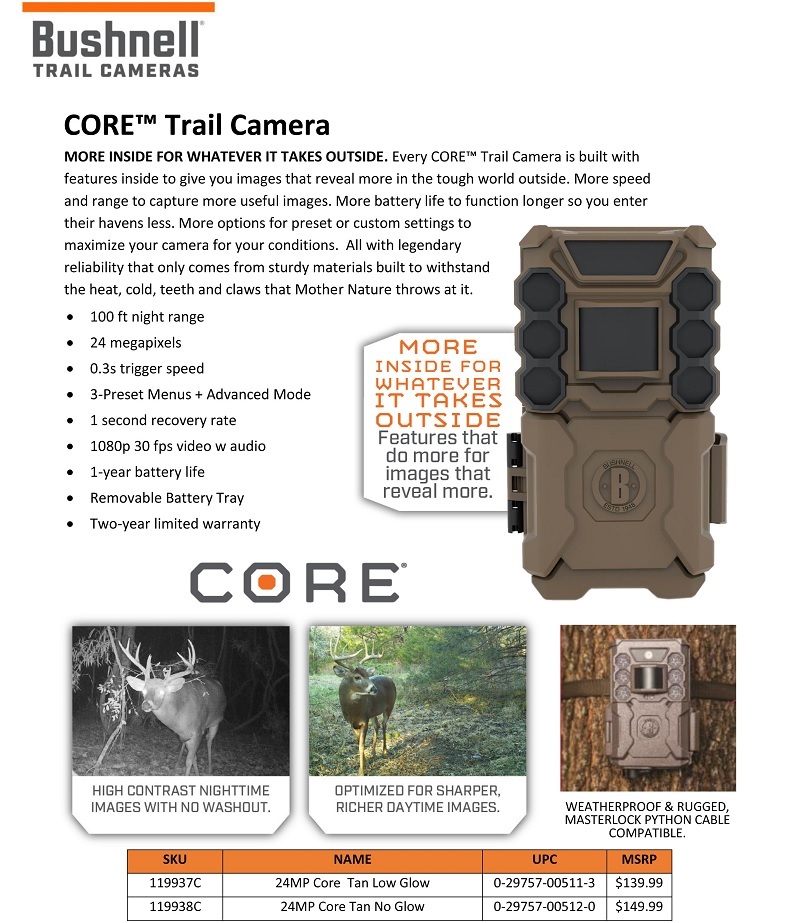 With one year of battery, a quick photo capture speed, and a moderate price-point of $139.99 – $149.99 this trail camera could be a great option for many hunters who do not have a bevy of trail cameras at their disposal as we head into fall.

The Bushnell CORE DS kicks everything up a notch to give sportsmen and sportswomen the best clarity for photos and video captured of potential trophies. Between both of these models, which one are you liking the best? The Bushnell CORE? Or the CORE DS? Let us know all of your thoughts in the Comments below! We always appreciate your feedback.