Are Fixed-Blade Broadheads Dead – or Deadly?

Are Fixed-Blade Broadheads Dead – or Deadly?

Did that just happen? I was JUST getting ready to call it for the morning, when I looked up and saw two deer walking into range of the tree I was sitting in. The first, a five point, walked straight to a licking branch about 25 yards in front of me, while the second deer made other plans and split – wise decision. With all of my attention now on the five point, I clipped on my release and began going through my pre-shot routine.

Suddenly, the deer looked in my direction. That’s it. Hunt over. But then he took a step towards me. Then another. Before I knew it, I was staring straight down at the deer while it literally sniffed the first few steps of the ladder stand I was perched in. I couldn’t believe it! The deer slowwwly turned around to walk back where he came from, and I used the small window to get drawn. I took a moment to adjust not only for the close distance, but also the dramatic downward shot angle I was taking. When the bow fired, I knew I made a good shot, which was confirmed by the buck jumping and kicking backwards.

I followed him for roughly 40 yards, and then lost him after he stopped in some thick brush. I stood in my stand for 20 minutes looking at the same spot trying to locate him, but nothing. I decided to get down and start looking for blood. It was fairly heavy starting out, but tapered off the longer I tracked him. I was down to a drop here, and a drop there when I decided to make a small jump to the area where I last saw him standing.

I went to where I thought I saw him last, and turned to locate my stand as a point of reference. Well, laying about 10 yards away from me, I could see his antlers sticking up behind the tall grass. I got my buck. 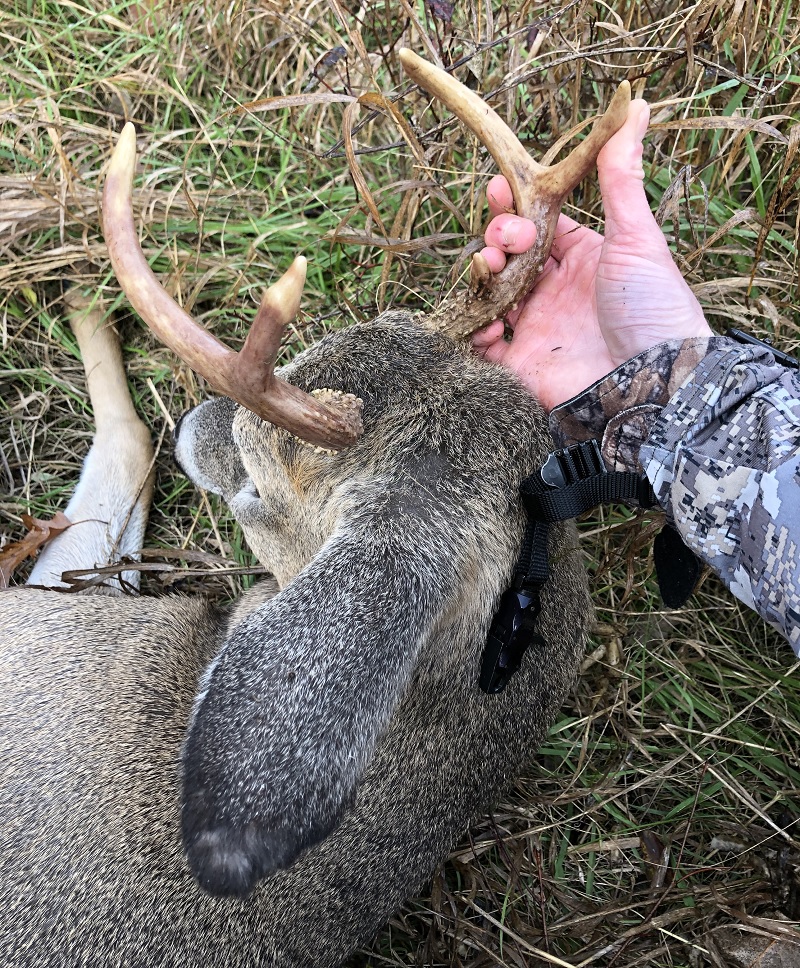 Even better, the 125 -grain G5 Montec I was shooting did the job and got this deer down quick. After making a switch from an expandable broadhead last season, I was very pleased with the results.

If you’re looking for a definitive answer as to which is better between fixed-blade and mechanical broadheads, you won’t find one anywhere. It’s really just a matter of preference, and something you’ll have to decide for yourself.

With that in mind, here’s some food for thought on fixed-blade broadheads.

Five of the best Fixed-Blade Broadheads

Before we get started, here are five of the best fixed-blade broadheads for you to consider. This is meant to give you a look at some of the better options available right now. 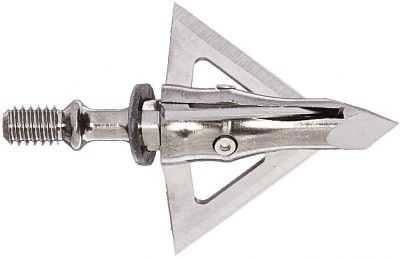 Founded in 1984, Muzzy is the number one name in fixed-blade broadheads, and proudly Made in the USA. The Muzzy Trocar is perhaps the hardest-hitting broadhead in the Muzzly line. It has a hardened chisel tip design with a 1-3/16 inch cutting diameter. This compact 100-grain fixed-blade broadhead comes pre-assembled with razor-sharp blades and years of experience backing it up. It has a .035-inch right helical design for easy tuning and true flight. A truly great fixed-blade design.

The Magnus fixed-blade broadheads have a long-standing reputation for toughness and penetration on big game. The Magnus Buzz Cut Stinger has a main blade with stinger blades coming out of the sides. The Buzz Cut blades are serrated for deeper cutting. The Magnus fixed-blade broadheads are made from 420 stainless steel with a .40-inch thickness. They are backed by a lifetime warranty with a machined and spin-tested construction for true flight. 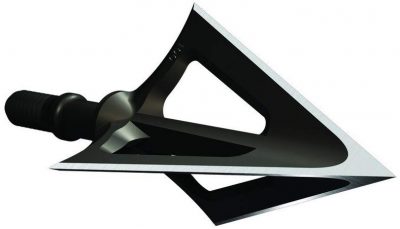 If you prefer one-piece construction, look no further than the time-tested G5 Montec. This stainless-steel, three-blade broadhead comes in 85-, 100- and 125-grain versions, with cutting diameters of 1-inch, 1 1/16-inch and 1 1/8-inch, respectively. You can even order them in pink in the 100-grain offering. The best part is they can be re-sharpened for years of service. 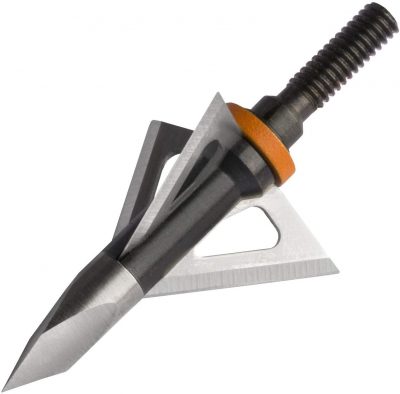 When you’re looking for strong fixed-blade broadheads, there are a couple of things to look for, which can be found in the WASP Drone. These tough fixed-blade broadheads have a chiseled trocar tip, stainless-steel construction and a 1-1/8 inch cutting diameter. They have a reduced ferrule surface, so they tune easy and fly extremely well.

Which is Better – Fixed-Blade or Mechanical Broadheads?

One of the biggest negatives of using a fixed-blade head is bow tuning. You’re shooting a fixed-wing aircraft out of your bow without flaps, rudder or ailerons. Your arrow vanes help in stabilization, but those wide blades sticking out in front of the vanes can have a tendency to veer off target.

In contrast, most mechanical broadheads have the profile of a target tip, so they cut the air with little resistance or air-deflection issues. They’re easier to tune, and you can likely shoot another model and still be relatively sighted-in if you find yourself without your brand of mechanical in the outback.

That said, most modern compound bows tune so precisely that getting a fixed-blade broadhead to fly with accuracy is hardly a problem. Any pro shop technician worth their weight will have you hammering 10-rings with a fixed-blade head after one visit. The trend in low-profile broadheads aids this tuning issue with less wing surface to steer an arrow astray.

A second major consideration is cutting surface. Some mechanical broadheads deploy and have a cutting surface of more than 2 inches. Several spread out to carve nearly a 3-inch hole through your target. Compare that to the typical fixed-blade head that averages a 1 1/8-inch cutting surface to slice through a target.

Of course, it’s not all apples to apples. A mechanical broadhead requires additional kinetic energy to deploy, robbing some of the energy needed for arrow penetration. This is particularly true on quartering shots requiring added penetration to reach vital organs. If you’re shooting an 80-pound draw, it likely doesn’t matter, but for the mainstream shooter, companies took this into consideration. Many now manufacturer mechanicals with rear-sliding cutting blades instead of those that fold (jackknife) back. Rear-sliding blades use less kinetic energy during deployment.

Regardless of the size of the cutting surface, it’s razor sharpness that gets the job done with either style of head. Broadheads kill via hemorrhaging, so to create the most bleeding possible, they have to be operating-room sharp. Kinetic energy or not won’t help you if you try to punch a Popsicle stick through a buck instead of a scalpel.

A final thought is price. Most fixed-blade heads cost 25 to 50 percent more than mechanicals. In Washingtons, that relates to an added expense anywhere from $10 to $30 per three-pack of fixed-blades. It likely won’t cause a divorce, but if you’re prone to missing.. just saying.

What are Some Benefits to Shooting Fixed-Blade Broadheads?

As I explained earlier, fixed-blade broadheads tend to be stronger and more durable simply by their design. The cutting blades are secured front-to-back, whereas most mechanicals deploy upon impact, leaving them only attached to the front or midsection of the ferrule. Some fixed blades, such as the G5 Montec I’m currently running, are a one-piece construction. It’s virtually indestructible.

Adding to the ‘pros’ list is the simplicity factor. There are no moving parts, no hinges, and no rubber bands found on any fixed-blade broadhead. With no moving parts, and the sturdiness of a one-piece construction, you can have confidence every time you send an arrow towards your target.

Like I said, there really is no right or wrong answer here. Just some food for thought as you’re navigating the isles looking for your next set of broadheads.