It’s an age-old debate, if a tool is beautifully made, is it still a useful tool? With the launch of the Rapide Black Ice 1911, Kimber has developed a stunning piece of craftsmanship that’s also a workhorse pistol for everyday use.

On first glance, this is a stunning firearm. From the custom G10 grips to the slide lightening cuts to the silver/grey KimPro II finish, the Rapide Black Ice is gorgeous. But good looks, as they say, aren’t everything.

The Rapide Black Ice also has a fantastic personality. Upon initial testing, we were stunned by how flat this 1911 shot. Yes, the all-metal 1911 is a meaty piece of recoil-eating metal, but those visually striking slide cuts take just enough mass out of the slide to flatten out any muzzle jump.

Somehow, Kimber has also done the improbable and taken the already perfect (in one author’s opinion) 1911 grip and made it feel even better in the hand. There are two big reasons for this, and they start with the aforementioned G10 grips. Instead of adding flesh-shredding stippling all over the grip, or stock in 1911 parlance, Kimber has a rather genius mixture of aggressive grip and flesh-filling voids. This allows the shooter to get a solid, repeatable grip without the need to find a pair of gloves after the first few magazines.

The second addition to the Rapide Black Ice that makes it fit so well is Kimber’s proprietary Stiplex front strap checkering that seems to grip the fingers like hook and loop tape. No matter how sweaty we got at the range, and it was a hot humid day, we never worried about our grip on the Rapide. 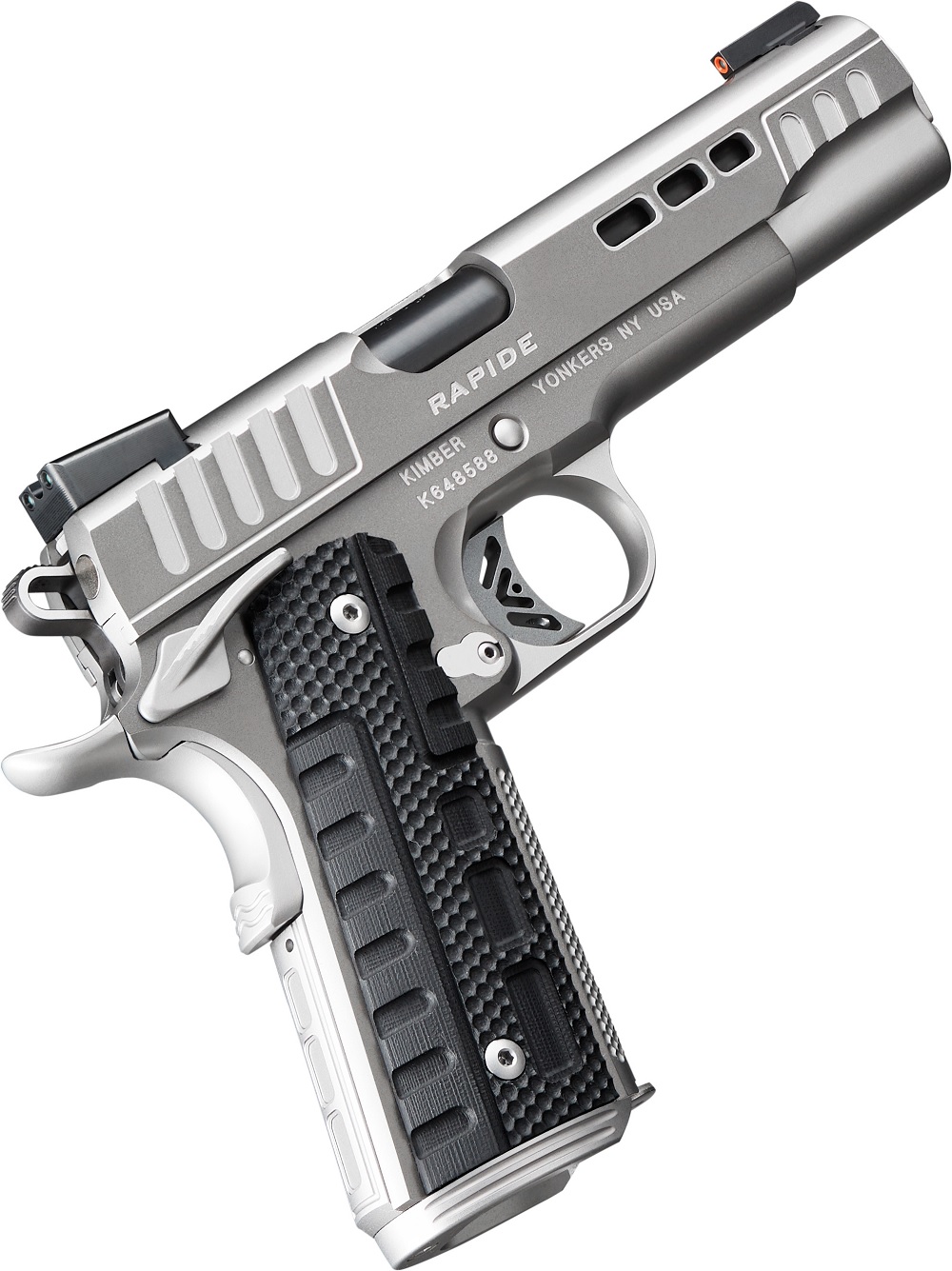 Outside of the physical attributes, the Rapide is also a very smart pistol. Kimber understands that 1911s were intended to be .45 caliber from the day they first emerged from John Browning’s Utah workshop. But, they also know the modern pistol shooter has a plethora of high-performance loads in a variety of calibers and uses to choose from. Rather than force a round peg into a square hole, Kimber launched the Rapide Black Ice in the three most popular calibers right out of the gate.

This intelligence is evident throughout Kimber’s catalog. With the recent opening of the company’s Troy, Alabama, manufacturing facility, Kimber has brought firearms manufacturing to the modern age.

In addition to equipment, Kimber has used the new facility to significantly increase their product development, research and engineering teams. Now the company known for hands-on quality is also one with aerospace-level quality control and manufacturing practices.

This focus on quality is evident in the Rapide Black Ice. From the fit and function of the controls, to the crisp, 4- to 5-lb break on the trigger, everything seems to fit like it was cut by a laser. The blending of old-school craftsmanship and state-of-the-art precision manufacturing makes the Rapide Black Ice feel like a whole new creation and not the usual 1911 pattern pistol.

I spoke with Greg Grogan, Kimber’s president and chief operation officer, about the new facility and what this investment means to gun owners.

“In short, it means premium quality firearms, innovative new ideas and more capacity overall,” Grogan said. “We decided to custom build our facility, instead of trying to repurpose an existing factory. This has allowed us to streamline the process, add testing labs throughout the manufacturing chain, and tie our hands-on finishing steps to the latest manufacturing practices.”

If the Rapide Black Ice 1911 is an example of this marriage of craftsmanship and technology, I can’t wait to see what Kimber has for us in the future.