6 Things I learned at the 43rd Annual Goose Fest in Middle River, Minnesota

6 Things I learned at the 43rd Annual Goose Fest in Middle River, Minnesota

Confession time: I’m an avid big game and turkey hunter, but I can count on one hand the number of times I’ve pursued ducks or geese. So, when Matt Breuer from Northcountry Guide Service gave me a call and invited me to northwest Minnesota on a multi-species pursuit for various migrating birds during the 2017 Goose Festival, I thought I’d shake up my autumn plans a bit. Think — old dog, new tricks.

In no particular order, here are six things I learned during my weekend as a waterfowler:

This spring I had the chance to shoot Black Cloud, as well as the new Federal Premium Hi-Bird, on crows over decoys, and the ammo is crazy good. Click here to read my review — and see proof that sometimes I can hit critters that fly. In the video below from last fall, Matt explains why Black Cloud is so deadly on waterfowl.

FYI regarding DRC Calls (photo above): As I’ve said, I know next to nothing about duck and goose calls, so I badgered Matt constantly with questions during our weekend together at Goose Fest. I learned there’s a reason the best calls aren’t cheap, and the fact that Matt chooses DRC for his guiding should tell you something. DRC has been around since 2007, and it was founded by North American Goose Calling Champion Cory Loeffler.

Watch the video above where Cory explains the “guts” used in his 2017 line of goose calls.

Case in point: Matt and his buddy Tim and I scouted a field of cut barley on Friday evening that was filled with Canada geese. Matt gained permission from the landowner, and the following morning we brushed in our FA layout blinds before sunrise. Our FA LiveCraft full-body field goose decoys were set to entice Canada geese into our laps.

The first group of birds to arrive — about 20 honkers as I recall — came in on a string. (Matt called it “filthy.”) With their wings set seemingly forever as they glided toward us, the geese finally dropped their landing gear and were ready to touch dirt when Matt yelled, “Take ‘em!” I sat up and picked out a single goose on my side of the flock. As my bird flared left and gained elevation, I focused on the goose’s head, swung my shotgun barrel and proceeded to miss cleanly three times from 15 yards. Lesson learned? At super-close range, the shot pattern diameter is small; I should’ve focused my eyes on the center mass of the goose and then pulled the trigger. Thankfully, I did better the next time. 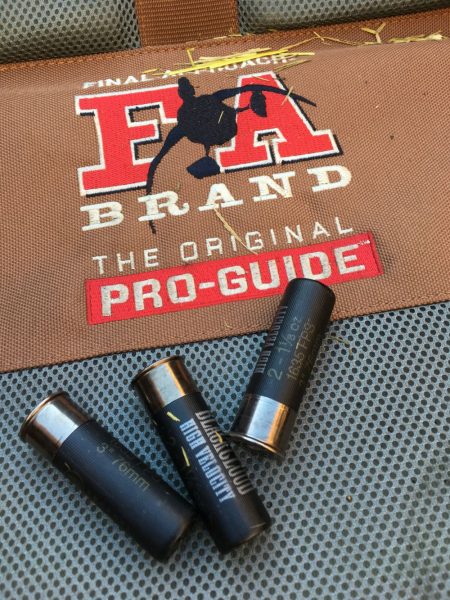 Check out the video below for tips on how to properly stubble a layout blind. As Matt explained to me before the shooting started, it’s critical to have a “good hide.”

I think the www.ReportBand.gov program is great, and it was fun to learn the history behind the one banded goose and one banded hen mallard shot by Matt and his buddy Tim. FYI: I purposely didn’t shoot a banded bird because I thought they were protected — that’s my story and I’m sticking to it. 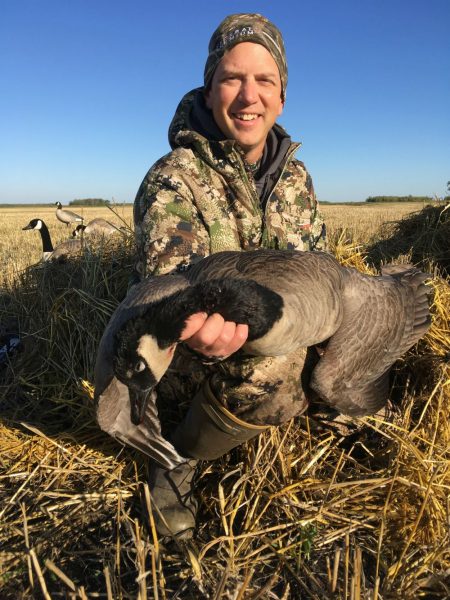 For evidence, I offer the following activities: goose (as in dead) weigh-in contest; goose calling contest, with divisions for youth, women and men; goose cookoff where the crowd tastes everything and then picks the winner; a festival parade that must boost the town attendance from 300 to at least 5,000; and tons more family friendly activities.

And get this — while I was there, someone driving a parade pickup asked if I would help throw candy to the kids, so I jumped on his flatbed trailer and spent the next 90 minutes wearing out my throwing arm firing Kit Kats and Tootsie Rolls to the curb. Fun!

FYI: Middle River is 22 miles north of the larger town of Thief River Falls (population 8,800), which is where Matt and I stayed in a hotel. Duck, goose and crane hunting is insanely good in the whole area, thanks in large part to the massive Agassiz National Wildlife Refuge, which encompasses 38,000 acres of wetlands.

If you plan on attending Goose Fest in 2018, look for me — if I’m lucky enough to tag my first sandhill crane, I’ll proudly carry it in the parade and then stop to tell the story to anyone who will listen.